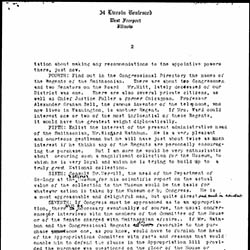 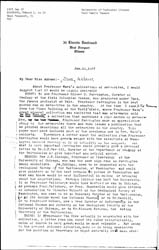 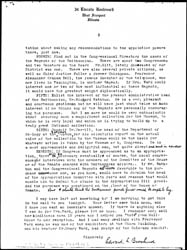 About Professor Ward's collection of meteorites, I would suggest that it would be highly desirable

FIRST: To see Professor Oliver C. Farrington, Curator of Geology at the Field of Columbian Museum, who graduated under Dana, the famous geologist at Yale. Professor Farrington is the best posted man on meteorites in the country. At the time I can to the Museum from the Mines Building of the World's Fair, where Professor Ward's great mineral collection was exhibited that was afterwards sold to the Museum, a collection that contained a fine series of meteorites, up to the Museum, Professor Farrington made an appreciative study of the meteorites there and then issued a publication that we printed describing all the meteorites in the country. This paper must have included most of the specimens now in Mrs. Ward's cabinets. Therefore a letter about the collection from Professor Farrington would have great weight with the scientists at Washington because Farrington is an authority on the subject. But what is more important Farrington could probably give a personal letter to Dr. G.P. Merrill, Curator of the Department of Geology at the Smithsonian or give important and helpful advice.

SECOND: See J. P. Iddings, Professor of Mineralogy at the University of Chicago, who has the same high rank as Farrington among scientists. He, Iddings, used to be connected with the Geological Survey of the Smithsonian, at Washington and could give pointers as to the best methods to pursue at Washington and what men there would be most influential in making or bringing about the negotiations. Perhaps Idding has left the University. If so Professor Salisbury would know whether he was in Chicago, or perhaps Prof. Salisbury, or Prof. Chamberlin would give letters of introduction to Director Walcott of the Geological Survey at Washington, who used to be an Honorary Curator of the Smithsonian, (or of its inside wheel the National Museum) or to Dr. Merrill, or to Professor Holmes, now a Head Curator of Anthropology in the National Museum and firmly on the Geological Faculty of the University of Chicago, or to Mr. Richard Rathbun, the Acting Secretary of the Smithsonian.

THIRD: If Professor Van Hise actually is acquainted with the collection, a letter from him about its value scientifically, which of course is very great, would be most valuable. But owing to the present delicate situation, when he is being considered for the position of Secretary he might naturally feel much hesitation [page 2] about making any recommendations to the appointive powers there, just now.

FOURTH: Find out in the Congressional Directory the names of the Regents of the Smithsonian. There are about two Congressmen and two Senators on the Board. Mr. Hitt, lately deceased of our District was one. There are also several private citizens, as well as Chief Justice Fuller a former Chicagoan. Professor Alexander Graham Bell, the famous inventor of the telephone, who now lives in Washington, is another Regent. If Mrs. Ward could interest one or two of the most influential of these Regents, it would have the greatest weight diplomatically.

FIFTH: Enlist the interest of the present administrative head of the Smithsonian, Mr. Richard Rathbun. He is a very pleasant and courteous gentleman but he will have just about twice as much interest if he thinks any of the Regents are personally encouraging the purchase. But I am sure he would be very enthusiastic about securing such a magnificent collection for the Museum, to which he is very loyal and which he is trying to build up a truly great National collection.

SIXTH: Consult Dr. Merrill, the head of the Department of Geology at the <National> Museum, for his scientific report on the actual value of the collection to the Museum would be the basis for whatever action is taken by the Museum or by Congress. He is a most approachable and delightful man, but quite direct <and much in earnest.>

SEVENTH: If Congress must be approached as to an appropriation, there is <will be> necessary eventually of course, the usual conferences or interviews with the members of the Committee of the House or of the Senate charged with Smithsonian affairs. If Mr. Rathbun and the Congressional Regents were <are> favorable to the purchase and some one, as you know, would have to furnish the head of the Appropriations Committee with facts and reasons that would enable him to defend the clause in the Appropriation Bill provided the purchase was questioned on the floor of the House or Senate. <But I should think the Smithsonian's private funds would be ample to buy.>

I may have left out something but I am hurrying to get this in the mail to you tonight. Your letter came this noon, and I know you want an immediate answer. If there is anything else I can do for Mrs. Ward, please let me know. I remember very well her kindliness when 15 years ago I helped you "tote" from Hull-House to her reception. And I had many dealings with Professor Ward when he was one of the exhibitors at the Mines Building. And his brother Mr. Henry Ward, had charge of the Colorado exhibit. 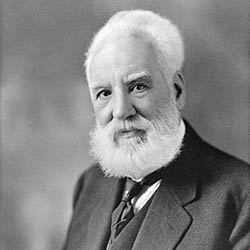 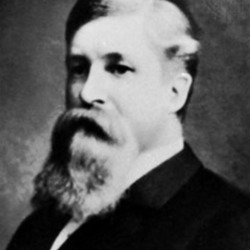 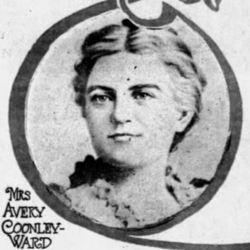 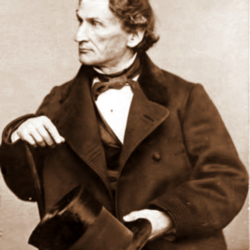 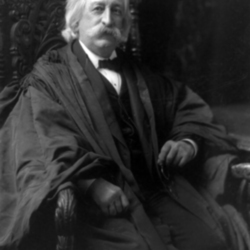 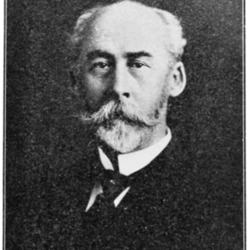 Burchard writes Addams with detailed steps necessary to put a collection of meteorites in a museum.