Statement on a Conference Held at Hull-House, June 9, 1906 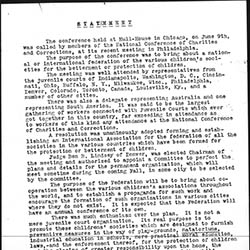 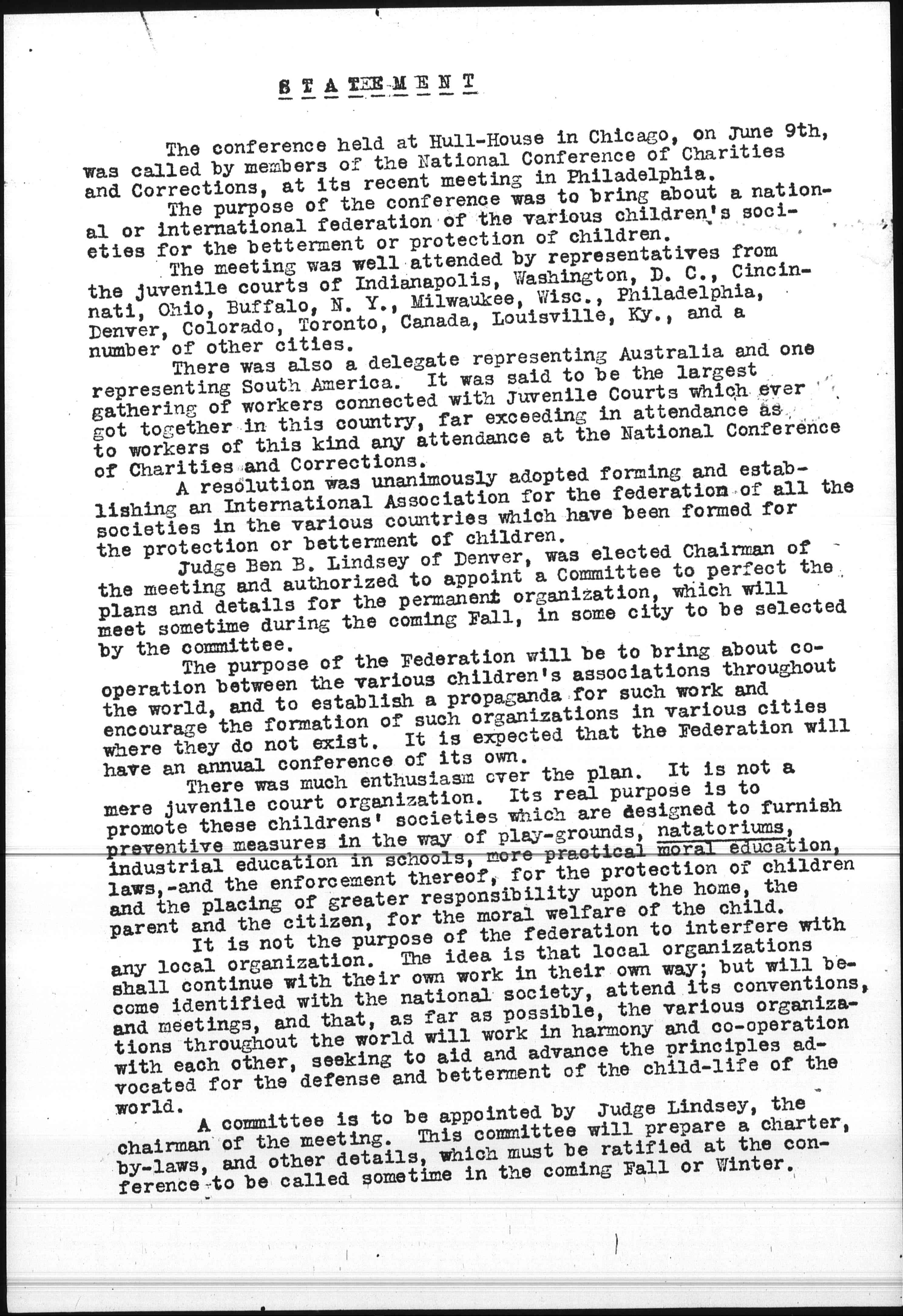 The conference held at Hull-House in Chicago, on June 9th, was called by members of the National Conference of Charities and Corrections, at its recent meeting in Philadelphia.

The purpose of the conference was to bring about a national or international federation of the various childrens' societies for the betterment or protection of children.

There was also a delegate representing Australia and one representing South America. It was said to be the largest gathering of workers connected with Juvenile Courts which ever got together in this country, far exceeding in attendance as to workers of this kind any attendance at the National Conference of Charities and Corrections.

A resolution was unanimously adopted forming and establishing an International Association for the federation of all the societies in the various countries which have been formed for the protection or betterment of children.

Judge Ben B. Lindsey of Denver, was elected Chairman of the meeting and authorized to appoint a Committee to perfect the plans and details for the permanent organization, which will meet sometime during the coming Fall, in some city to be selected by the committee.

The purpose of the Federation will be to bring about [cooperation] between the various children's associations throughout the world, and to establish a propaganda for such work and encourage the formation of such organizations in various cities where they do not exist. It is expected that the federation will have an annual conference of its own.

There was much enthusiasm over the plan. It is not a mere juvenile court organization. Its real purpose is to promote these childrens' societies which are designed to furnish preventive measures in the way of [playgrounds], natatoriums, industrial education in schools, more practical moral education, laws,--and the enforcement thereof, for the protection of children and the placing of greater responsibility upon the home, the parent and the citizen, for the moral welfare of the child.

It is not the purpose of the federation to interfere with any local organization. The idea is that local organizations shall continue with their own work in their own way; but will become identified with the national society, attend its conventions, and meetings, and that, as far as possible, the various organizations throughout the world will work in harmony and [cooperation] with each other, seeking to aid and advance the principles advocated for the defense and betterment of the child-life of the world.

A committee is to be appointed by Judge Lindsey, the chairman of the meeting. This committee will prepare a charter, by-laws, and other details, which must be ratified at the conference to be called sometime in the coming Fall or Winter. 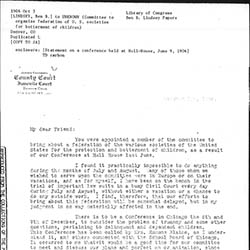 Conference on Truancy--Its Causes and Prevention (1906)

Statement on a conference held at Hull-House.