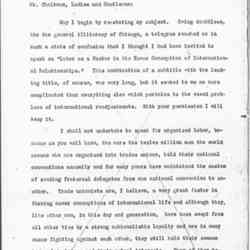 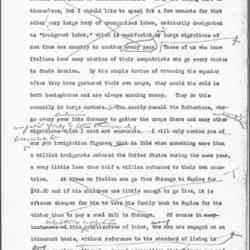 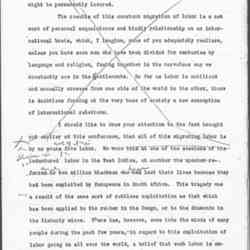 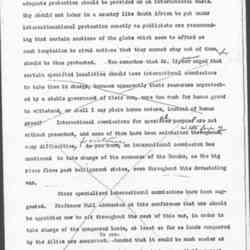 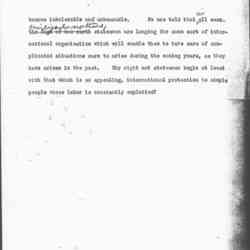 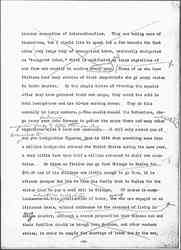 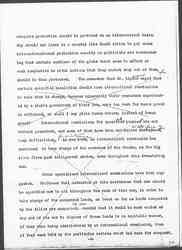 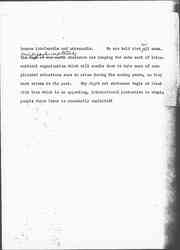 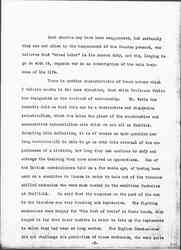 LABOR AS A FACTOR IN THE NEWER CONCEPTION OF INTERNATIONALISM.

May I begin by [restating] my subject. Owing doubtless, [to] the general illiteracy of Chicago, a telegram reached me in such a state of confusion that I thought I had been invited to speak on "Labor as a Factor in the Newer Conception of International Relationships." This combination of a subtitle with the leading title, of course, was very long, but it seemed to me no more complicated than everything else which pertains to the vexed problems of international readjustments. With your permission I will keep it.

I shall not undertake to speak for organized labor, because as you well know, the more [than] twelve million men the world around who are organized into trades unions, hold their national conventions annually and for many years have maintained the custom of sending fraternal delegates from one national convention to another. Trade unionists are, I believe, a very great factor in forming newer conceptions of international life and although they, like other men, in this day and generation, have been swept from all other ties by a strong nationalistic loyalty and are in many cases fighting against each other, they still hold their common body of doctrines and their mutual interests. Many of them believe they will eventually become reunited upon the basis of a [page 2] broader conception of internationalism. They are taking care of themselves, but I should like to speak for a few moments for that other very large body of unorganized labor, ordinarily designated as "immigrant labor," which is manifested <every year> by <in > large migrations of men from one country to another. Those of us who know Italians hear many stories of their compatriots who go every winter to South America. By the simple device of crossing the equator after they have garnered their own crops, they avoid the cold in both hemispheres and are always earning money. They do this annually in large numbers. <As> You easily recall the Ruthenians, who go every year <autumn> into Germany to gather the crops there and many other <nationalities migrate yearly by the thousands> migrations which I need not enumerate. I will only remind you of <according to> our own immigration figures; that in 1914 when something more than a million immigrants entered the United States during the same year, a very little less than half a million returned to their own countries. At times an Italian can go from Chicago to Naples for $26.60 and if his children are little enough to go free, it is oftener cheaper for him to take his family back to Naples for the winter than to pay a coal bill in Chicago. Of course in many instances of this <international migration> mobilization of labor, the <many> men are engaged on an itinerant basis, without reference to the standard of living in either <any> country, although a recent proposition that Chinese men and their families should be brought into Montana, and other western states, in order to supply the shortage of labor due to the war, [page 3] was rejected on the ground that the American standards of living might be permanently lowered.

The results of this constant migration of labor is a [network] of personal acquaintance and kindly relationship on an international basis, which, I imagine, none of you adequately realizes, unless you have seen men who have been divided for centuries by language and religion, fusing together in the marvelous way we constantly see in the Settlements. So far as labor is mobilized and annually crosses from one side of the world to the other, there is doubtless forming at the very base of society a new conception of international relations.

I should like to draw your attention to the fact brought out earlier at this conference, that all of this migrating labor is by no means <all of it is> free labor. We were told at one of the sessions of the <There is> indentured labor in the West Indies, at another the speaker referred to <and> ten million [black men] who had <have> lost their lives because they had been exploited by Europeans in South Africa. This tragedy was a result of the same sort of ruthless exploitation as that which has been applied to the rubber in the Congo, or to the diamonds in the [Kimberley] mines. There has, however, come into the minds of many people during the past few years, in regard to this exploitation of labor going on all over the world, a belief that such labor is entitled to protection, and that when certain bodies of men liable to exploitation, are <live> under governments who are not able to give it to them, [page 4] adequate protection should be provided on an international basis. Why should not labor in a country like South Africa be put under international protection exactly as publicists are recommending that certain sections of the globe which seem to afford so much temptation to rival nations that they cannot stay out of them, should be thus protected. You remember that Mr. [Lippmann] urged that certain specified localities should have international commissions to take them in charge, because apparently their resources unprotected by a stable government of their own, were too much for human greed to withstand, or shall I say plain human nature, instead of human greed? International commissions for special purposes are not without precedent, and some of them have been maintained throughout <in the face of> many difficulties, As you know <for instance>, an international commission has continued to take charge of the commerce of the Danube, as the big river flows past belligerent states, even throughout this devastating war.

Other specialized international commissions have been suggested. Professor Hull advocated at this conference that one should be appointed now to sit throughout the rest of this war, in order to take charge of the conquered lands, at least so far as lands conquered by the Allies are concerned. <He> contended that it would be much easier at the end of the war to dispose of these lands in an equitable manner, if they were being administered by an international commission, than if they were held by the particular nations which had made the conquest. [page 5] If the German colonies which are now held in South Africa by the British could be taken over by a special commission until the war was ended, and an international Conference on Terms of Peace could decide what to do with them, that in itself would be a great gain.

Might we not propose a similar international commission for the protection of <In addition to the> labor which is now under governments too feeble to offer <adequate> protection or <there is that> which is so migratory that it cannot properly be protected by any one government. What would be more natural than to begin the new international morality, so sorely needed, with that simple impulse to protect the weak which, we are told, was the beginning of individual morality, as the defense of <the> women and children in the tribe was the beginning of the national morality. of which we are now so proud. Beginning naturally with defenseless labor, such international commissions might in time even take care of other things beside labor. At the present moment it seems absurd, does it not, that it is impossible to build a railroad to [Baghdad], to provide corridors to the sea for land locked states, or to secure warm water harbors for Russia, without involving the world in war. Many of us believe that this war, as so many other wars, is not so much the result of quarrels between nations, as of an unsuccessful endeavor to obtain through war that which could not be obtained in times of peace because no international machinery had been provided through which men might solve world problems which had [page 6] become intolerable and unbearable. We are told that <in> all over the face of the Earth <civilized nations,> statesmen are longing for some sort of international organization which will enable them to take care of complicated situations sure to arise during the coming years, as they have arisen in the past. Why might not statesmen begin at least with that which is so appealing, international protection to simple people whose labor is constantly exploited? [page 7]

Such stories may have been exaggerated, but certainly they are not alien to the temperament of the Russian peasant, who believes that "bread labor" is his sacred duty, and who, longing to go on with it, regards war as an interruption of the main business of his life.

There is another characteristic of human nature which I believe counts in the same direction, that which Professor [Veblen] has designated as the instinct of workmanship. Mr. Wells has recently told us that this war is a destructive and dispersive industrialism, which has taken the place of the constructive and accumulative industrialism with which we are all so familiar. Accepting this definition, it is of course an open question how long mechanics will be able to go on with this reversal of the experiences of a lifetime, how long they can continue to defy and outrage the training they have received as apprentices. One of the British commissioners told us a few weeks ago, of having been sent on a committee to France in order to take out of the trenches skilled mechanics who were much needed in the munitions factories at Sheffield. He said that the response on the part of the men in the trenches was very touching and impressive. The fighting [mechanics] were hungry for "the feel of tools" in their hands, they longed to lay down their muskets in order to take up the implements to which they had been so long wonted. The English Commissioner did not challenge the patriotism of these mechanics, who were quite Labor as a Factor in the Newer Conception of Internationalism, May 31, 1917 (draft)

Addams argues for the protection of migrant laborers and food supplies, and discusses the different outlook that the working class has towards war. The speech was prepared for the National Conference on Foreign Relations of the United States.

Addams, Jane, “Labor as a Factor in the Newer Conception of Internationalism, May 31, 1917,” Jane Addams Digital Edition, accessed November 30, 2021, https://digital.janeaddams.ramapo.edu/items/show/10420.