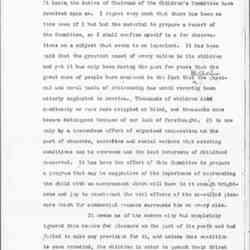 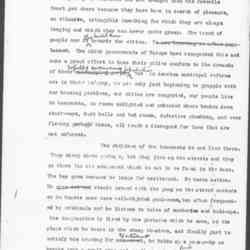 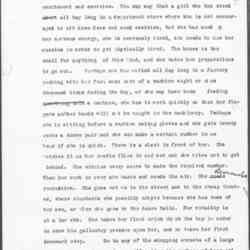 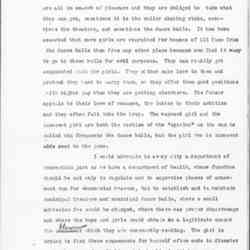 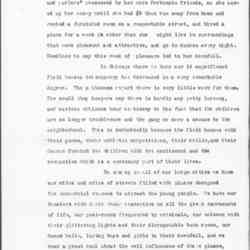 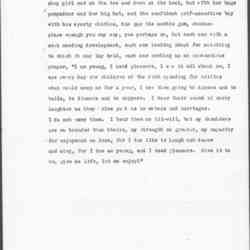 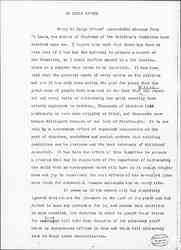 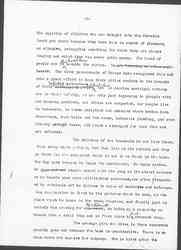 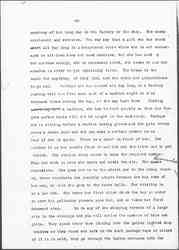 Owing to Jane Addams' unavoidable absence from St Louis, the duties of Chairman of the Children's Committee have devolved upon me. I regret very much that there has been no time even if I had the material to prepare a report of the Committee, so I shall confine myself to a few observations on a subject that seems to me important. It has been said that the greatest asset of every nation is its children and yet it has only been during the past few years that the great mass of people have awakened to the fact that <the children> the physical and moral basis of citizenship has until recently been utterly neglected in America. Thousands of children died needlessly or were made crippled or blind, and thousands more became delinquent because of our lack of forethought. it is now only by a tremendous effort of organized cooperation on the part of churches, societies and social workers that existing conditions can be overcome and the best interests of childhood conserved. It has been the effort of this Committee to prepare a program that may be suggestive of the importance of surrounding the child with an environment which will have in it enough brightness and joy to counteract the evil effects of the so-called pleasure which for commercial reasons surrounds him on every side.

It seems as if the modern city had completely ignored this desire for pleasure on the part of its youth and had failed to make any provision for it, and unless this condition is soon remedied, the children in order to quench their thirst for amusement <joy> will take deep draughts of the poisonous stuff which is [everywhere] offered to them and which will ultimately lead to their utter demoralization. [page 2]

The majority of children who are brought into the Juvenile Court get there because they have been in search of pleasure, an [elusive], intangible something for which they are always longing and which they can never quite grasp. The trend of people now is <the [[illegible]> towards the cities. We are becoming an urban population. The older governments of Europe have recognized this and make a great effort to have their cities conform to the demands of their multiplying people <rapidly increasing population> but in America municipal reforms are in their infancy, we are only just beginning to grapple with our housing problems, our cities are congested, our people live in tenements, in rooms unlighted and unheated where broken down stair-ways, dark halls and bed rooms, defective plumbing, and over flowing garbage boxes, all teach a disregard for laws that are not enforced.

The children of the tenements do not live there. They sleep there perhaps, but they live on the streets and they go there for the amusement which is not to be found in the home. The boy goes because he longs for excitement. He wants action. He goes out and stands around with the gang on the street corners or he haunts some warm well-lighted pool-room, too often frequented by criminals and he listens to tales of murders and hold-ups. His imagination is fired by the pictures which he sees, or the plays which he hears in the cheap theaters, and finally just to satisfy his cravings for amusement <excitement>, he holds up a passer-by or breaks into a small shop and so first takes his <first> downward step.

The average girl who lives in these tenements usually goes out because the home is unattractive. There is no room where she can see her company. She is tired after the [page 3] monotony of her long day in the factory or the shop. She needs excitement and exercise. You may say that a girl who has stood about all day long in a department store where she is not encouraged to set down does not need exercise, but she has used up her nervous energy, she is nervously tired, she needs to use her muscles in order to get physically tired. The house is too small for anything of this kind, and she makes her preparations to go out. Perhaps she has worked all day long in a factory pushing with her foot some sort of a machine eight or nine thousand times during the day, or she may have been feeding something into a machine, she has to work quickly so that her fingers and her hands will not be caught in the machinery. Perhaps she is sitting before a machine making gloves and she gets twenty cents a dozen pair and she can make a certain number in an hour if she is quick. There is a clock in front of her. She watches it as her needle flies in and out and she tries not to get behind. She strains every nerve to make the required number. When her work is over she wants and needs the air. She needs <demands> recreation. She goes out on to the street and to the cheap theater, whose standards she possibly adopts because she has none of her own, or else she goes to the dance halls. Her vitality is at a low ebb. She takes her first drink which the boy in order to show his gallantry presses upon her, and so takes her first downward step. Go to any of the shopping streets of a large city in the evenings and you will notice the numbers of boys and girls. They spend their time looking into the [gaily] lighted shop windows or they stand and talk in the dark passage ways or alleys [or] if it is cold, they go through the ladies entrance into the [page 4] saloon where if they take a drink they may stay some time. They are all in search of pleasure and they are obliged to take what they can get, sometimes it is the roller skating rinks, sometimes the theaters, and sometimes the dance halls. It has been asserted that more girls are recruited for houses of ill fame from the dance halls than from any other place because men find it easy to go to these halls for evil purposes. They can readily get acquainted with the girls. They either make love to them and pretend they want to marry them, or they offer them good positions with higher pay than they are getting elsewhere. The former appeals to their love of romance, the latter to their ambition and they often fall into the trap. The wayward girl and the innocent girl are both the victim of the "spieler" as the man is called who frequents the dance halls, but the girl who is innocent adds zest to the game.

I would advocate in every city a department of recreation just as we have a department of health, whose function would be not only to regulate and to supervise places of amusement run for commercial reasons, but to establish and to maintain municipal theaters and municipal dance halls, where a small admission fee could be charged, where there was proper chaperonage and where the boys and girls could obtain a legitimate manner the amusement <pleasure> which they are constantly seeking. The girl in trying to find these amusements for herself often ends in disaster as in the case of an Italian girl who lived with her seven brothers and sisters in two rooms in a wretched basement on the North Side <of Chicago>. She worked in a factory and her companions were in [page 5] better circumstances than herself. She longed for the "pianos and parlors" possessed by her more fortunate friends, so she saved up her money until she had $9 then ran away from home and rented a furnished room on a respectable street, and hired a piano for a week in order that she might live in surroundings that were pleasant and attractive, and go to dances every night. Needless to say this week of pleasure led to her downfall.

In Chicago where we have our 14 magnificent field houses delinquency has decreased in a very remarkable degree. The policeman report there is very little work for them. The small shop keepers say there is hardly any petty larceny, and various citizens bear testimony to the fact that the children are no longer troublesome and the gang no more a menace to the neighborhood. This is undoubtedly because the field houses with their games, their athletic competitions, their drills, and their dances furnish the children with the excitement and the occupation which is a necessary part of their lives.

To sum up in all of our large cities we have our miles and miles of streets filled with places designed for commercial reasons to attract the young people. We have our theaters with their cheap travesties on all the great sacraments of life, our pool-rooms frequented by criminals, our saloons with their glittering lights and their disreputable back rooms, our dance halls, luring boys and girls to their downfall, and we hear a great deal about the evil influences of these places, but what are we doing for the [youth] to make the other side of life attractive? What are we doing for the young boys and girls who stand behind the counters of our shops for 13, or sometimes 14 hours a day? [page 6]

We meet them every day upon our streets, the over-dressed little shop girl out at the toe and down at the heel, but with her huge pompadour and her big hat, and the confident self-assertive boy with his sporty clothes, his gay tie and his gum, commonplace enough you say, yes perhaps so, but each one with a soul needing development, each one looking about for something to which it may lay hold, each one sending up an unconscious prayer, "I am young, I need pleasure, I see it all about me, I see every day the children of the rich spending for trifles what would keep me for a year, I see them going to dances and to balls, to dinners and to suppers. I hear their sound of merry laughter as they drive past me in motors and carriages. I do not envy them. I bear them no ill-will, but my shoulders are no broader than theirs, my strengths no greater, my capacity for enjoyment no less, for I too like to laugh and dance and sing, for I too am young, and I need pleasure. Give it to me, give me life, let me enjoy!" Louise deKoven Bowen presented the report of the Children's Committee of the National Conference on Charities and Correction for Jane Addams, discussing the lives of children in tenements and proposing more resources for recreation for them. The speech was given during a session on Children held on May 23.