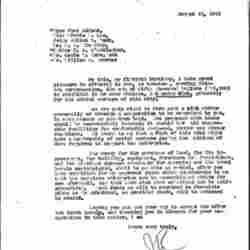 Louis M. Cahn dedicated his career to different areas of social work. He began his career as a lawyer. In 1912, philanthropist Julius Rosenwald donated $50,000 to build a country club for social workers and Cahn served as a trustee for the project, alongside Jane Addams. He went on to become the director of Jewish Charities in Chicago. While holding this position, he was elected to be the president of the National Conference of Jewish Social Service. He was also involved with Jennah Charities.