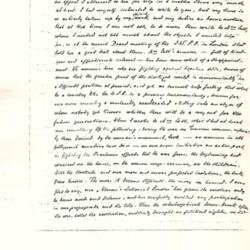 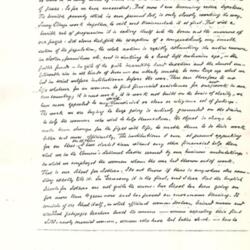 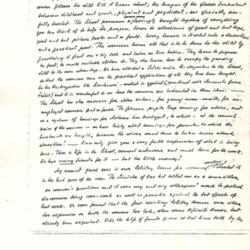 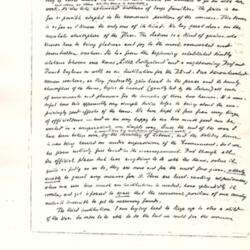 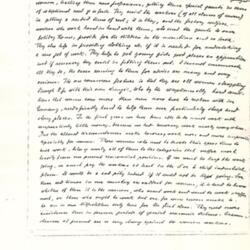 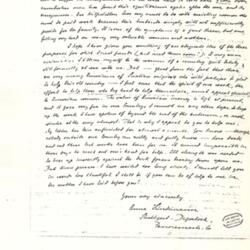 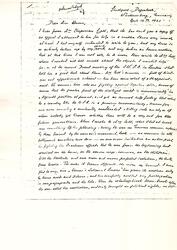 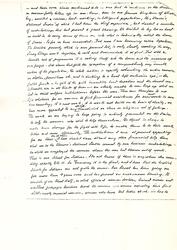 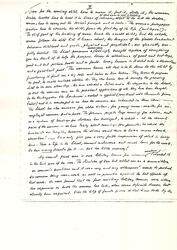 My second great one is our [holiday] Home for women ↑[workers?]↓. I started it in the last year of the war. The Minister of War had called me as a [councilor] on women's questions and it was my and my colleagues' work to protect the women doing war-work as well as possible against the bad effects of that work. We soon found that the few existing holiday homes were either too expensive or [took?] the women too late, when some definite [illegible] had already been acquired. With the help of funds given at that time talk by the [page 4] Empress Augusta Victoria and by the Imperial Government we started a Home, very well situated and in every way suited for the purpose. We have kept it going till now, but in a few months' time the available funds will be at an end. There we take women in all cases, where a stay of some weeks in the Home will enable the woman to go on with her work ↑and where no other Holiday Home is available↓. We also take exhausted mothers of large families. The price is so far as possible adapted to the economic position of the women. This Home is as far as I know the only one of its kind. We lay great [illegible] on the mental atmosphere of the place. The Matron is a kind of genius, who knows how to bring gladness and joy to the most overworked and downtrodden creature. She has from the beginning established kindly relations between our Home "Little Switzerland" and a neighboring Deaf and Dumb Asylum as well as an Institution for the Blind. Our downhearted women workers, as they gradually gain heart in the peace of the homely atmosphere of the Home, begin to [invent?] (gently led by the Matron) all sorts of amusements and pleasures for the inmates of those two homes. It is wonderful how this apparently very simple device helps to bring about the surprisingly good effects of the home. We have kept it free from every tinge of officialdom -- and we are very happy to see how much good can be worked in a comparatively very simple way. Since the end of the war I have been taken over ↑as [councilor] on question of women's work↓ by the Ministry of [Labor], and the Holiday Home is now being carried on under supervision of the Government, but we are given entirely free hand in its management. But though all the official places that have anything to do with the Home, value it quite as fully as we do, they are now and for the next few years, utterly unable to grant any means for it. These are heart-rending [illegible]; when one sees how much an institution is needed, how splendidly it works, and yet is forced to agree that the economic position of our country makes it impossible to get the necessary funds.

The third institution I am trying hard to keep up is also a child of the war. In order to be able to do the best we could for the women [page 5] [illegible], we established in the chief industrial places of the country what we call: Hilfostellen für [illegible], Welfare Centers for women workers. These do not give charity, their one object is to assist the woman workers in all difficulties that either arise out of her work or that her work prevents her from seeing to herself. They have at present a great deal to do with unemployed women, teaching them new professions, getting them special grants in cases of exceptional need & so forth. They assist the workers (of all classes of course) in getting a needed time of rest; it is they, and the factory welfare workers who work hand in hand with them, who send the guests to our Holiday Home, provide for the children in the meantime and so forth. They also help in providing clothing etc. if it is needed for undertaking a new job of work. They help to get young girls good places as apprentices and if necessary they assist in fitting them out. I cannot enumerate all they do, the cases coming to them for advice are many and very various. The one common feature is that they are all women struggling through life with their own strength, who by the exceptionally hard conditions that women even more than men now have to reckon with in Germany, need a friendly hand to help them over particularly steep and stony places. In the first years we have been able to do much work with comparatively little money, because we had honorary work nearly everywhere. But the [illegible] circumstances make honorary work more and more impossible especially for women. Those women who used to devote their spare time to [this] work, belong nearly all of them to the categories that suffer most heavily from our present economical position. If we want to keep the work going, we must pay the workers at least for the 5 or 6 chief individual places. It would be a [sad?] pity indeed if it could not be kept going for these sad times in our country are [saddest] for women; it is hard to know whether of these it [illegible] the women, who must work and want to work suffer most, or those who ought to work but are for some reason unable to. We can in our Hilfostellen only care for the first class. They need more assistance than in former period of special economic distress. [German services] at present are to [illegible] the women workers. [page 6] All the men who [illegible] used to find work in the colonies, in the provinces were taken from us, in [illegible] and so forth, some pressing into our smaller and poorer country, asking for work to maintain their families. That makes the competition in the [labor] market, which is bad enough owing to our lack of coal and [illegible], very bitter indeed, and it is chiefly the women who have to suffer the consequences. On the other hand it will take years before [illegible] men have found their equilibrium again after the war and its consequences. Our Hilfostellen have very much to do with assisting women who must do paid work because their husbands simply will not sufficiently provide for the family. It is one of the symptoms of a great [illegible], but one falling very hard on many very valuable women and workers.

I hope I have given you something of an adequate idea of these purposes for which I need funds (and need them soon!). It may seem curious that I address myself to the women of a country quite lately still formally at war with us. But -- apart from the fact that there are very many Americans of [illegible] origin who will perhaps be glad to help their old country -- I feel sure that the spirit of our work, the effort to help those who try hard to help themselves, must appeal especially to American women. The value of American money is high at present, and it goes very far in our Country. I cannot see any other hope to keep up the work I have spoken of beyond the end of the autumn, or [illegible] winter at the very utmost. That is why I appeal to you to help me. My letter has lain unfinished for almost a month. You know -- though nobody outside our Country can really and fully know -- how dark and sad these last weeks have been for us. It seemed impossible in those days to reach out one's hand for help. All strength was needed to bear up inwardly against the dark forces bearing down upon us. But time presses. I have waited too long already. I cannot tell you in words how thankful I shall be if you can be of help to me in the matter I have laid before you.