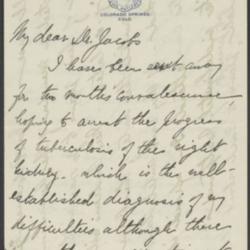 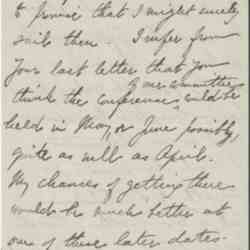 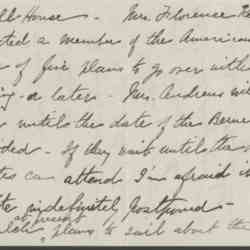 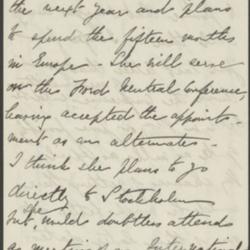 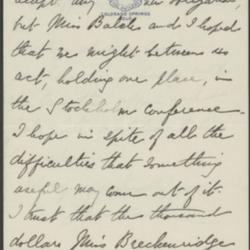 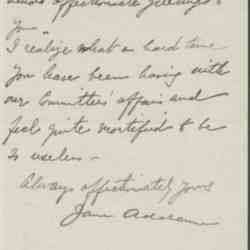 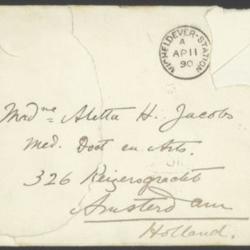 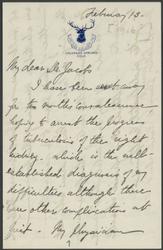 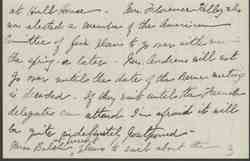 I have been sent away for two months' convalescence, hoping to arrest the progress of tuberculosis of the right kidney, which is the well-established diagnosis of my difficulties although there were other complications at first. My physician [page 2] absolutely forbade my going to Europe before April and refused to promise that I might sail then. I infer from your last letter that you think the conference <of our committee> could be held in May, or June possibly, quite as well as April. My chances of getting there would be much better at one of these later dates. As soon as the date is settled will you kindly cable me [page 3] at Hull-House. Mrs. Florence Kelley who was elected a member of the American Committee of five plans to go over with me in the spring -- or later -- Mrs. Andrews will not go over until the date of the Berne meeting is decided. If they wait until the French delegates can attend I'm afraid it will be quite indefinitely postponed.

Miss Balch <at present> plans to sail about the [page 4] 20th of June. She is free from Wellesley College for the next year and plans to spend the fifteen months in Europe. She will serve on the Ford Neutral Conference, having accepted the appointment as an alternate. I think she plans to go directly to Stockholm but <she> would doubtless attend a meeting of our International Committee first if it were late enough. [page 5]

My health has been, of course, too uncertain for me to accept any new obligation, but Miss Balch and I hoped that we might between us act, holding one place, in the Stockholm conference. I hope in spite of all the difficulties that something useful may come out of it. I trust that the thousand dollars Miss [Breckinridge] sent has reached you safely. I plan to send another [page 6] thousand very soon.

Miss Smith is with me and sends affectionate greetings to you.

I realize what a hard time you have been having with our Committee's affairs and feel quite mortified to be so useless. Addams relays her reason for being away from Hull House to Jacobs, and discusses plans for the Europe conference should she not be able to attend.

New scans provided by Atria.
This letter was scribed by Mary Rozet Smith.