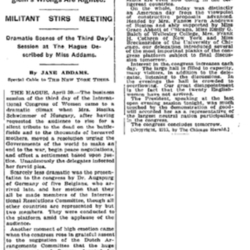 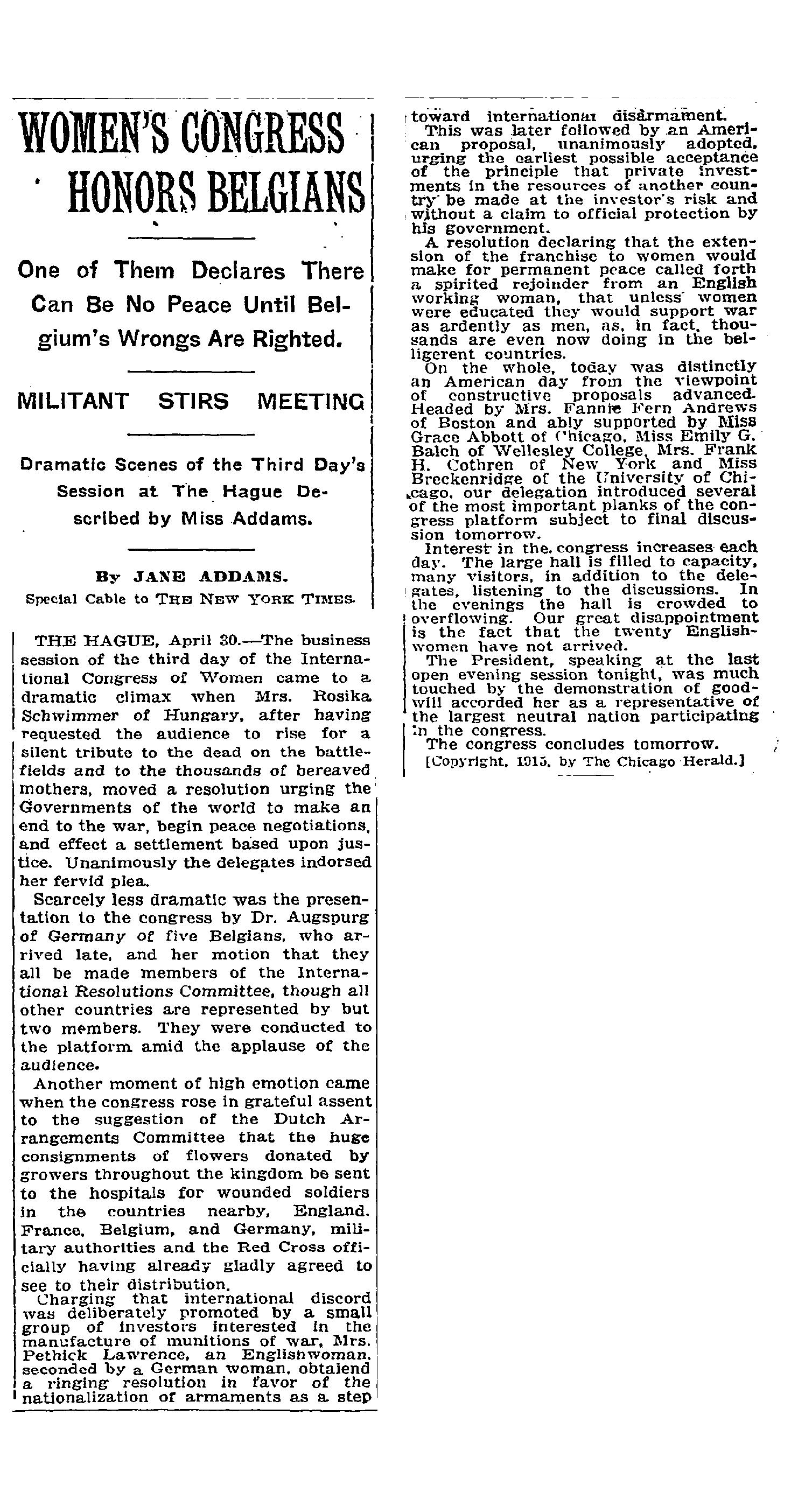 One of Them Declares There Can Be No Peace Until Belgium's Wrongs are Righted.

Dramatic Scenes of the Third Day's Session at The Hague Described by Miss Addams.

THE HAGUE, April 30. -- The business session of the third day of the International Congress of Women came to a dramatic climax when Mrs. Rosika Schwimmer of Hungary, after having requested the audience to rise for a silent tribute to the dead on the battlefields and to the thousands of bereaved mothers, moved a resolution urging the Governments of the world to make an end to the war, begin peace negotiations, and effect a settlement based upon justice. Unanimously the delegates endorsed her fervid plea.

Scarcely less dramatic was the presentation to the congress by Dr. Augspurg of Germany of five Belgians, who arrived late, and her motion that they all be made members of the International Resolutions Committee, though all other countries are represented by but two members. They were conducted to the platform amid the applause of the audience.

Another moment of high emotion came when the congress rose in grateful assent to the suggestion of the Dutch Arrangements Committee that the huge consignments of flowers donated by growers throughout the kingdom be sent to the hospitals for wounded soldiers in the countries nearby, England, France, Belgium, and Germany, military authorities and the Red Cross officially having already gladly agreed to see to their distribution.

Charging that international discord was deliberately promoted by a small group of investors interested in the manufacture of munitions of war, Mrs. Pethick Lawrence, an Englishwoman, seconded by a German woman, obtained a ringing resolution in favor of the nationalization of armaments as a step toward international disarmament.

This was later followed by an American proposal, unanimously adopted, urging the earliest possible acceptance of the principle that private investments in the resources of another country be made at the investor's risk and without a claim to official protection by his government.

A resolution declaring that the extension of the franchise to women would make for permanent peace called forth a spirited rejoinder from an English working woman, that unless women were educated they would support war as ardently as men, as, in fact, thousands are even now doing in the belligerent countries.

On the whole, today was distinctly an American day from the viewpoint of constructive proposals advanced. Headed by Mrs. Fannie Fern Andrews of Boston and ably supported by Miss Grace Abbott of Chicago, Miss Emily G. Balch of Wellesley College, Mrs. Frank H. Cothren of New York and Miss [Breckinridge] of the University of Chicago, our delegation introduced several of the most important planks of the congress platform subject to final discussion tomorrow.

Interest in the congress increases each day. The large hall is filled to capacity, many visitors, in addition to the delegates, listening to the discussions. In the evenings the hall is crowded to overflowing. Our great disappointment is the fact that the twenty Englishwomen have not arrived.

The President, speaking at the last open evening session tonight, was much touched by the demonstration of goodwill accorded her as a representative of the largest neutral nation participating in the congress.

Addams discusses the events of the International Congress of Women, including presentations by Schwimmer, Augsburg, and Pethick-Lawrence..

A new scan was made to replace a poor microfilm scan.
It is possible that Louis P. Lochner was a ghostwriter for this article.