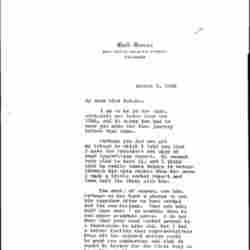 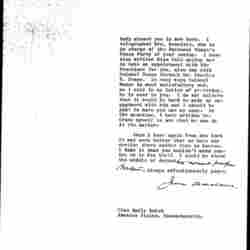 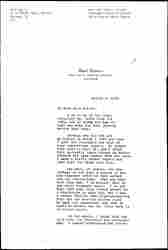 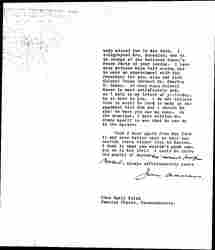 I am to be in the East, certainly not later than the 15th, and it seems too bad to have you make the long journey before that time.

Perhaps you did not get my letter in which I told you that I gave the President one copy of your typewritten report. He seemed very glad to have it, and I think that he really takes things in better through his eyes rather than his ears. I made a little verbal report and then left the thing with him.

You must, of course, see him. Perhaps we may have a chance to see him together after we have worked out the resolutions. They are only half done now; I am sending them to you under separate cover. I do not know that your mind worked around to a Commission as mine did, but I had a strong feeling that representatives from all the neutral [nations] would be much too cumbersome and that it would be better for the first body to be rather small.

On the whole, I think that the talk with the President was encouraging. I cannot understand how everybody [page 2] missed you in New York. I telegraphed Mrs. Benedict, who is in charge of the National Woman's Peace Party of your coming. I have also written Miss Wald urging her to make an appointment with the President for you, also one with Colonel House through Mr. Charles R. Crane. In many ways Colonel House is most satisfactory and, as I said in my letter of yesterday, he is near to you. I do not believe that it would be hard to make an engagement with him and I should be glad to have you use my name. In the meantime, I have written Mr. Crane myself to see what he can do in the matter.

When I hear again from New York it may seem better that we have our meeting there rather than in Boston. I take it that you wouldn't mind coming on to New York! I could be there the middle of August <but would prefer Boston--> Always affectionately yours, 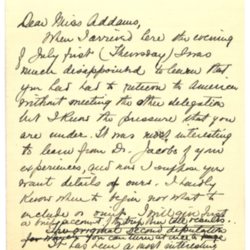 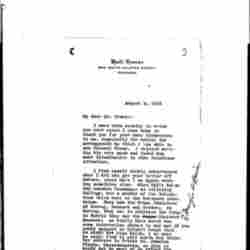 Addams discusses her meeting with President Wilson and suggests that Balch meet him as well.