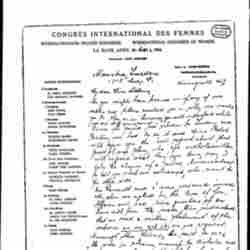 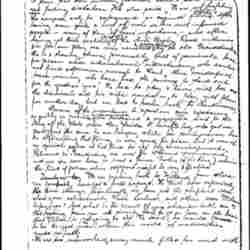 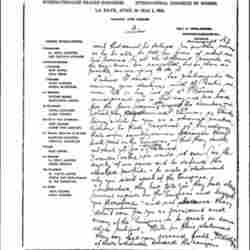 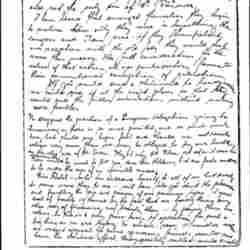 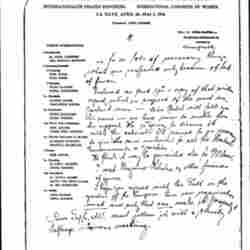 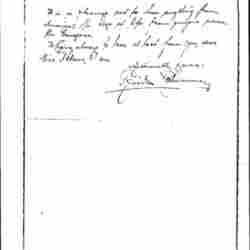 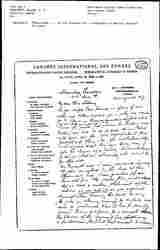 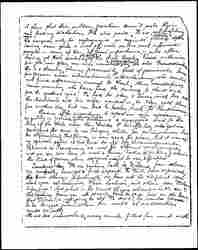 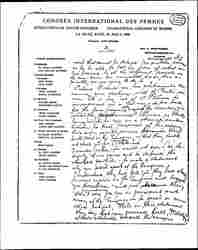 As you might have learned -- if any of our cables and letters reached you -- why we wanted you to stay on in Europe, you will understand while <we are still going round!>

Since you could not return to London and Berlin we had to do it. and Miss Balch will give you the full report about that part of our story. As she and Miss Macmillan will report what they have done, may I [take] the chance of a sailing America boat to tell you what we achieved, who went to the other side.

Mrs Ramondt and I were received immediately when we asked by the Min. of For. Affairs and had [five] quarters of an hour with him. We made him understand that we need a written statement of the nature as we got it on our request.

Amongst other things, he said to us: "No side is strong enough to dictate and none so weakened that it has to sue for peace." This in response to a remark [about] the fitness of the moment for [starting] a conference. We liked that remark because [page 2] it show that their military position doesn't make them yet feeling dictators. He also said: "We are not fighting to conquer, only to safeguard us against future <attacks>." After having seen quite a host of more or less well informed people -- many of them of great [importance?], -- and after having got their section <B. N. V.> of the Anti Oorlog Raad enthusiastic for our plan, we were [received] <privately> by the old [Grand Duchess]. She is a charming, [strong] personality, full of passionate love for peace and international understanding, who could not find expressions enough to thank "those [wonderful] brave women, who have had the courage to stand out for the greatest good." We had to stay 3 hours with her and the Admiral and his wife wanted us to stay with them for another day, but we had to hasten back to Scandinavia.

Because of the importance to report our new experiences as quickly as possible <in Scandinavia> we postponed a suggested visit to the King of the state where Mrs. [Frida] P. lives. (The lady who got no passport to come to our Congress, while her countrywomen had no difficulties). That King is very good for peace, but it was of no special value at that time to get his encouragements. Returned to Scandinavia we met the different governments and we are now here to meet a Prince (brother of the King) who is the kind of person whose support might be very effective.

[I enclose two] We are pushing back to Holland from where you probably have got a full report. We pull now especially the two strings. Unfortunately we have not the slightest idea about your achievements. Have Lochner, and others seen Wilson before you? And what is the result of your interview with him? Not hearing from you we simply have to go on here on the basis that Wilson is not going to act. We wish he would prove to be the great man whom this world of mediocrities needs so badly.

We are too overworked, every minute filled too much with [page 3] work that cannot be delayed for another moment as to be able to tell you more of what we had learned by all the different people in the countries we revisited, but as soon as possible, we are going to do it.

Enclosed I send you two statements concerning your dealings with the Berlin women. It is too bad of Dr Bäumer to misrepresent you in that way and too bad for the four women <who> signed the circular -- in which they mentioned Dr Bäumer [two illegible words] being civil to you as a strange contradiction to their proposal of boycotting their own countrywomen because they took part in the Congress, -- that they could not reach you for a <courtesy> statement.

I wonder [whether] you would not care for the dignity of our cause and to defend the attacked pacifists -- to make a statement why you didn't speak of the Congress.

I understood, they had told you they had already several reports on the Congress and begged you therefore -- and not because they didn't care for you as president and envoy of the Congress -- to speak on some other subject. While in their statement they say that you proved full "[illegible] of their attitude toward the congress [page 4] by avoiding to broach the subject. It is a shame, and not the only sin of Dr Bäumer.

I have heard that amongst themselves they begin to [realize] how silly they were in boycotting the congress and I am sure: if they [knew?] about our reception with the old lady they would feel more than uneasy. Her full consideration for the value of that action, etc. is so contradictory from to their conventional conception of patriotism.

If you would send a statement to headquarters we could use it at the right places so that [they] would end the bitter accusations without making more trouble.

We dropped the question of a European delegation going to America, as there is so much possibility and so much work here, but should our hopes fail and should we not reach action very soon, then we may be obliged to try our luck on the other side of the ocean. Why, oh why did Wilson not act, as it was his <opportunity?> There would be much to tell you, dear Miss Addams, but one feels under to be under the eyes of an invisible censor.

Miss Balch -- who has endeared herself to all of us, but surely to none more than to me -- will have told you about the pleasures and troubles, the joys and sorrows of our common [trips?]. A great deal of trouble is caused by the fact, that we hardly know any other way of financing our travels, than -- by paying them ourselves. As this is a very poor basis of operating for such a big thing as we are trying to achieve now, I wonder [whether] an urgent appeal to some generous friends would not have the desired effect. Money quickly cabled would enable [page 5] us to do lots of necessary things which are neglected only because of lack of funds.

Enclosed we send you a copy of that written report, which on request of the most important man -- Miss Balch will tell you his name -- we had now to make for his support. He is going to discuss it with the cabinet. It seemed to us necessary to give the sums material to all the Neutral Governments in question.

We think it may be presented also to Wilson. I met [Siegmund-Schultze] & other friends of yours.

I hope you agreed with Mrs Catt in the question of the Congress. Our new [organization] must and only that can make it properly. Our Suffr. All. must follow it with a strictly Suffrage business meeting. [page 6] It is so strange not to hear anything from America. No sign of life from anyone since the Congress.

Hoping always to hear at last from you, dear Miss Addams, I am Proposal for a Conference of the Neutral Nations, August 2, 1915

Schwimmer is concerned that she hasn't heard from Addams and gives her an account of their activities in Scandinavia and Germany.

The Admiral, his wife, and the Swedish Prince have not been identified.