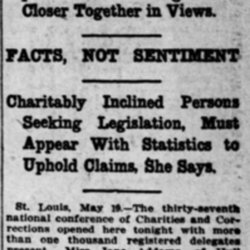 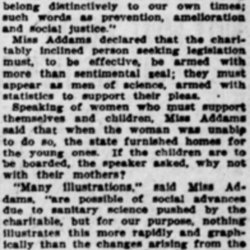 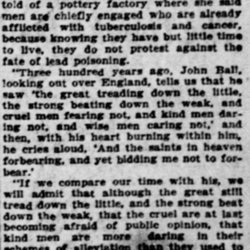 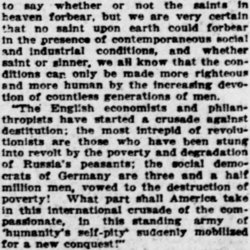 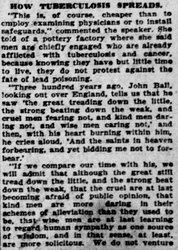 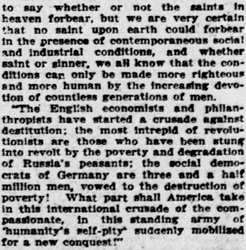 Jane Addams, the Hull House Worker, Says Philanthropists Are Coming Ever Closer Together in Views.

St. Louis, May 19. -- The thirty-seventh national conference of Charities and Corrections opened here tonight with more than one thousand registered delegates present. Miss Jane Addams, of Hull House, Chicago, and president of the conference, presided and delivered her annual address. Governor Hadley welcomed the delegates.

The conference will continue its session daily, concluding on the night of May 26. Sectional meetings will be held during the week at ten different places in the city.

Dividing the great body of philanthropists into two groups, the Charitable, actuated by "pity for the poor," and the [page 2] Radicals, "fired by hatred of injustices," Miss Addams declared that both are coming to realize that the world needs a certain power of compassion in our social atmosphere.

"Sheer experience in the complexity of life has at last united both groups in sentiment as well as in conviction," said Miss Addams. "The negative policy of relieving destitution, or even the more generous one of preventing it, is giving way to the positive idea of raising life to its highest value.

"If at times, the moral fire seems to be dying out of the good old words, relief and charity, it has undoubtedly filled with a new warmth certain words which belong distinctively to our own times; such words as prevention, amelioration and social justice."

Miss Addams declared that the charitably inclined person seeking legislation must, to be effective, be armed with more than sentimental zeal; they must appear as men of science, armed with statistics to support their pleas.

Speaking of women who must support themselves and children, Miss Addams said that when the woman was unable to do so, the state furnished homes for the young ones. If the children are to be boarded, the speaker asked, why not with their mothers?

"Many illustrations," said Miss Addams, "are possible of social advances due to sanitary science pushed by the charitable, but for our purpose, nothing illustrates this more rapidly and graphically than the changes arising from the movement to control and eradicate tuberculosis. We can quite honestly instance the demand for a more generous feeding of the healthful members of the family which is arising from the proper feeding of the tuberculosis patient."

Miss Addams asserted that an obligation rests upon the charity and correction people to discover how many of their burdens come to them as the result of social neglect, remedial incapacity, and a lack of industrial safeguards. She instanced an American white lead factory where she said every workman is discharged at the end of three months, not for faulty work, but to prevent the men from developing lead poisoning. [page 3]

"This is, of course, cheaper than to employ examining physicians or to install safeguards," commented the speaker. She told of a pottery factory where she said men are chiefly engaged who are already afflicted with tuberculosis and cancer, because knowing they have but little time to live, they do not protest against the fate of lead poisoning.

"Three hundred years ago, John Ball, looking out over England, tells us that he saw 'the great treading down the little, the strong beating down the weak, and cruel men fearing not, and kind men daring not, and wise men caring not,' and then, with his heart burning within him, he cries aloud, "And the saints in heaven forbearing, and yet bidding me not to forbear.'

"If we compare our time with his, we will admit that although the great still tread down the little, and the strong beat down the weak, that the cruel are at last becoming afraid of public opinion, that knd men are more daring in their schemes of alleviation than they used to be, that wise men are at last learning to regard human sympathy as one source of wisdom, and in that sense, at least, are more solicitous. We do not venture [page 4] to say whether or not the saints in heaven forbear, but we are very certain that no saint upon earth could forbear in the presence of contemporaneous social and industrial conditions, and whether saint or sinner, we all know that the conditions can only be made more righteous and more human by the increasing devotion of countless generations of men.

"The English economists and philanthropists have started a crusade against destitution; the most intrepid of revolutionists are those who have been stung into revolt by the poverty and degradation of Russia's peasants; the social democrats of Germany are three and a half million men, vowed to the destruction of poverty! What part shall America take in this international crusade of the compassionate, in this standing army of 'humanity's self-pity' suddenly mobilized for a new conquest!" 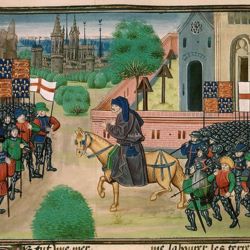 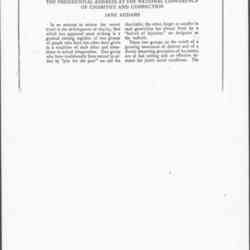 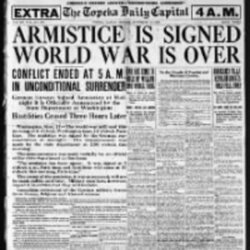 Newspaper report of Addams' speech at the conference of Charities and Correction in St. Louis discussing state of charitable work.