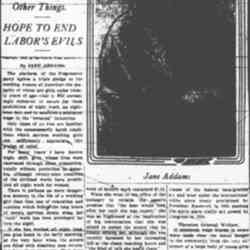 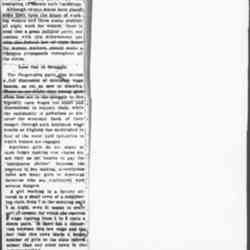 Copyright. 1912. By the Central Press Association

The platform of the Progressive party makes a triple pledge to the working women of America -- the majority of whom are girls under twenty years of age -- that it will unceasingly endeavor to secure for them prohibition of night work, an eight-hour day, and to establish a minimum wage in the "sweated" industries.

Only those of us who are familiar with the unnecessarily harsh conditions which environ working girls can sufficiently appreciate this pledge of relief.

For many years I have known night shift girls whose lives were shortened through sheer exhaustion, totally without protection in America, although twenty-nine countries of the civilized world have prohibited all night work for women.

There is perhaps no more dangerous moment in the life of a working girl than that one of relaxation and reaction which follow the long hours of severe nervous strain when her "rush" work has been prolonged far into the night.

If she has worked all night long, she goes home in the early morning, at the very hour when the streets are filled with dissolute men returning from their pleasures. That more girls, sore pressed in this moment of overfatigue, do not yield to the invitation "to brace up with a drink" always offered with the basest designs, is due to their inherent sturdiness of character.

Much of that ill health and discouragement which sometimes makes such a sudden onset upon a bright, promising girl is due without doubt to her long hours of work, often at a machine whose set speed determines the quantity of her output.

A girl who pushes down a lever with her right foot 8,000 or 9,000 times a day is making but a poor preparation for motherhood, and will later corroborate the grave medical statement that "the industrial overstrain of women constantly reacts in three ways: in a heightened infant mortality, a lowered birthrate, and an impaired second generation."

Certainly "an impaired second generation" is the business of government in a republic whose very existence depends upon the intelligence and virtue of its future citizens.

The hours of working women were made a federal concern when the United States Supreme Court rendered its decision in the Oregon ten-hour case and gave a new impulse to the judges in many states who were hesitating to sustain such legislation.

Although twenty states have placed some limit upon the hours of working women and three states prohibit all night work for women, there is need that a great political party, not content with this achievement nor with the federal law of eight hours for women workers, should make a vigorous propaganda throughout all the states.

Lose Out in Struggle.

The Progressive party also invites a full discussion of minimum wage boards, as yet so new to America. There is no doubt that young girls often lose out in the struggle to live honestly upon wages too small and intermittent to support them, while the community is powerless to discover the economic basis of their danger, through such minimum wage boards as England has established in four of the worst paid industries in which women are engaged.

American girls do not stand at open forges making iron chains nor are they as yet unable to pay for "continuous shelter" between the sessions in box making, nevertheless there are many girls in American factories who are confronted with serious dangers.

A girl working in a factory situated in a small town of a neighboring state, from 7 in the morning until 6 at night, sews 21 seams in every pair of corsets, for which she receives a wage varying from 3 to 9 cents a dozen pairs. Is there not a connection between this low wage and the fact that this town sends a larger number of girls to the state reform school than any other town in the commonwealth?

A girl recently left her village home at the solicitation of an agent representing this same factory who had promised her that she would make "good money." She found her pay envelope at the end of her [first] week of factory work contained $1.13.

When she went to the office of the manager to reclaim the agent's promise that "the boss would look after her until she was expert," she was so frightened at the implication of his conversation that she was afraid to accept the money that he finally offered her, although she was terribly harassed by her increasing bill at the cheap boarding house and "the kind of talk she heard there."

The relation of low wages to despair and wrongdoing can, from the nature of the case, never be determined, but the bare fact that one-fifth of the working women of the United States earn less than $200 a year and three-fifths less than $325 a year is fraught with significance and gives the public a stake in this most human side of industry.

It is, after all, "the daughters of the poor" who are most persistently pursued by those wretched men who make it a business to discover discouraged girls.

The local community must look to federal government itself for help in the suppression of this nefarious trade, for a well known trader in young girls cannot be brought back from a neighboring state even upon the order of a county judge, save under a federal law.

The first prosecution of the traffic in foreign girls was made under a clause of the federal immigration act and later under the international white slave treaty proclaimed by President Roosevelt in 1908 pending the white slave traffic act passed by Congress in 1910.

If minimum wage boards in every state made clear the moral danger to the community from the very existence of a large body of young girls underpaid in the best months of their trade and totally without resource during the months of the dull season, the nation would realize that standards of wages should come within the sphere of governmental control quite as subnormal sanitary conditions do, because they threaten the general welfare.

A woman who has lived for many years in the stockyards district of Chicago was the first to insist upon our need of a comprehensive investigation into the condition of "the woman and child wage earners of the United States," and she went to Washington more than once on behalf of the special appropriation.

Now that our nation has before it the results of this illuminating study it can no longer unwittingly place the profits of industry above the health and virtue of its future mothers nor fail to see the moral implications of exhausting hours and starvation wages. 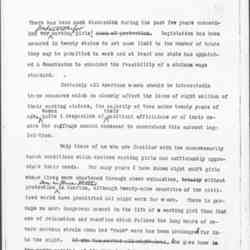 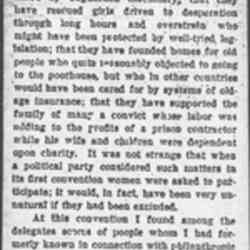 Addams discusses working conditions for women and advocates for a minimum wage for female workers.