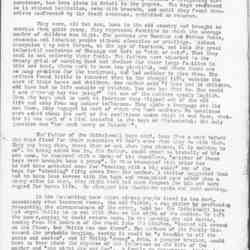 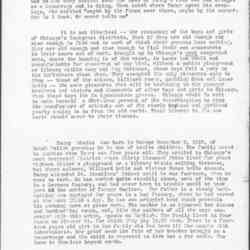 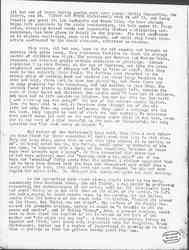 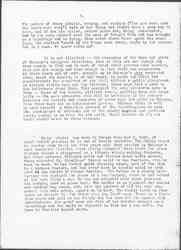 All but one of these Polish youths were very young. Philip Sommerling, the oldest, was 34. Walter and Frank Shibalowski were 24 and 21, and Tommy Schultz not quite 19. Leo Suchowski and Frank Kito, who have already begun life sentences in the state penitentiary, are both under 17. Their crime, revolting beyond words and apparently without mitigating circumstance, has been given in detail in the papers. The boys confessed to it without hesitation, even with bravado, and until they found themselves confronted by the death sentence, exhibited no remorse.

They were, all but one, born in the old country and brought to America when quite young. They represent families in which the average number of children was eight. The parents are Russian and German Poles, peasants and laboring people without education or privilege. Without exception they were thrown, at the age of fourteen, out into the great industrial maelstrom of Chicago and left to "sink or swim." That they sank is not entirely their fault. The fathers were absorbed in the dreary grind of earning food and shelter for their large families in this new land, where work is none too plentiful, and where there are so many problems for the immigrant, and had nothing to give them. The mothers found little to interest them in the changed life, outside the care of their homes and children. One mother said "I have had 14 children, and have had no life outside my kitchen. You see how that is. How could I see where my boy was going?" Not one of the mothers speaks English. When the boys went to work at fourteen they slipped out of the old life and away from any mother influence. They spoke a language she did not know, they engaged in work of which she knew nothing. No questions were asked about the work or the conditions under which she knew nothing. No questions were asked about the work or the conditions under which it was done, whether it was work of a kind tasteful to the boys or distasteful: the only question was "how much money on Saturday."

The father of the Shibalowski boys said, less than a week before the date fixed for their execution "I don't care what they do with them. They may hand them, shoot them or cut them into pieces; it is nothing to me." On being asked how he, the father, could speak so brutally of his own sons, he answered with a shrug of his shoulders, "neither of those boys ever brought home a penny." He then recounted with price how he had been arrested once for "beating with big stick" one of the boys for "stealing" fifty cents from his mother. A visitor suggested that had he been less severe with the boys and recognized some other than a money value in them, they might have had more respect for him and more regard for human life. He shrugged his shoulders again and said nothing.

In the Sommerling home where eleven people lived in two dark, unsanitary rear basement rooms, the old father, a rag picker by profession recounting the circumstances of the crime, told how the Shibalowski boys had urged Philip to go out with them on the night of the murder. He left the house, saying he would return soon. In the morning the old [father], coming from the bedroom of the shack into the kitchen, "looked all around on the floor, but Philip was not there." The members of the family discussed the probable hanging, saying it would be "a trouble to all the aunts and uncles," and if Philip "swung," John, a younger brother, would have to bear alone the expense of the insurance on the life of the mother and "she might die any day." A family so degenerate, living in squalor and filth, must [develop?] only degenerate sons and daughters. Frank Shibalowski, infant son (a nephew of Sommerling) is growing up in that home -- perhaps to feed the gallows twenty years from now. [page 2]

The mother of Tommy Schutlz, weeping and washing ("for men must work and women must weep") told of how Tommy had always been a good boy at home, and of how his sister, twelve years old, being tubercular, had become very excited over the news of Tommy's fate and has brought on a hemorrhage and is dying. When asked where Tommy spent his evenings, she replied "maybe by the fence over there, maybe by the corner. How do I know. He never tells me."

It is not illogical -- the reasoning of the boys and girls of Chicago's immigrant districts, that if they are old enough and wise enough to find and do work of which their parents know nothing, they are old enough and wise enough to find their own amusements in their hours out of work. Brought up in Chicago's most congested area, where the housing is of the worst, in homes too small and uncomfortable for amusement of any kind, without a public playground or library within easy walking distance, these boys fell a prey to the influences about them. They accepted the only pleasures open to them -- those of the saloon, billiard rooms, gambling dens and dance halls -- the same pleasures that will be beckoning to the younger brothers and sisters and thousands of other boys and girls in Chicago, when these boys lie in ignominious graves. Chicago would do well to make herself a Christmas present of the determination to stop the manufacture of criminals out of the sturdy boyhood and girlhood yearly coming to us from the old world. Their liberty in the new world should never be their license.

Tommy Schultz was born in Europe December 2, 1892, of Dutch Polish parents; he is one of twelve children. The family moved to America when Tommy was five years old. They settled in Chicago's most congested district where thirty thousand Poles lived for years without either a playground or a library within walking distance, but where saloons, billiard halls and vicious dance halls abound. Tommy attended St. Stanislaus' School until he was fourteen, when he went to work. He has worked quite steadily since, most of the time in a harness factory, and had never been in trouble until he took part in the murder of farmer Guelzow. The father is a steady hardworking man employed for years in a box factory, where he had earned at the most $2.65 a day. He has one crippled hand which prevents his earning more at piece work. The mother is an ignorant but decent and hardworking woman, and, like the mothers of all the [boys?] connected with this crime, speaks no English. The family lives in four rooms on Cleaver St. for which they pay $6.00 rent. There is a fourteen years old girl in the family who has been ill for months with tuberculosis. Her grief over the fate of her brother brought on a hemorrhage and the child is expected to live but a few weeks. The home is desolate beyond words. 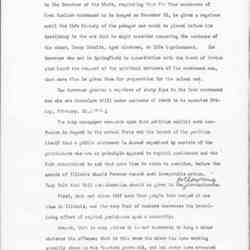 A narrative describing the social and economic background of four men convicted of murdering Frank Guelzow.

Unnamed relatives discussed in the report have not been indexed.