The "Piece-Work" System as a Factor in the Tuberculosis of Wage-Workers, 1908 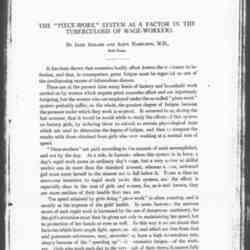 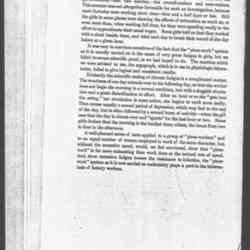 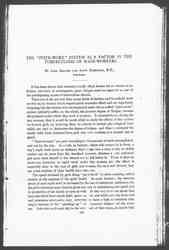 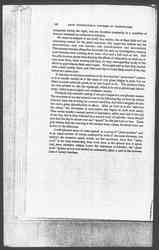 THE "PIECE-WORK" SYSTEM AS A FACTOR IN THE TUBERCULOSIS OF WAGE-WORKERS.

It has been shown that excessive bodily effort lowers the resistance to infection, and that, in consequence, great fatigue must be regarded as one of the predisposing causes of tuberculous disease.

There are at present time many kinds of factory and household work carried on by women which require great muscular effort and are injuriously fatiguing, but the women who are employed under the so-called "piece-work" system probably suffer, on the whole, the greatest degree of fatigue, because the pressure under which they work is so great. It occurred to us, during the last summer, that it would be worth while to study the effects of this system on factory girls, by inducing them to submit to certain physiological tests which are used to determine the rate of fatigue and then to compare the results with those obtained from girls who were working at a normal rate of speed.

"Piece-workers" are paid according to the amount of work accomplished, and not by the day. As a rule, in factories where this system is in force, a day's rapid work earns an ordinary day's wage, but a very active or skillful worker can do more than the standard amount, whereas a slow, awkward girl must exert herself to the utmost not to fall below it. There is thus an enormous incentive to rapid work under this system, and the effect is especially clear in the case of girls and women, for, as is well known, they are more reckless of their health than men are.

The speed attained by girls doing "piece-work" is often amazing, and is usually at the expense of the girl's health. In some factories the nervous strain of such rapid work is increased by the use of dangerous machinery, for the girl's attention must then be given not only to maintaining her speed, but to protection of her hands or eyes as well. In this way it comes about that factories which have ample light, space, and air, and which are free from dust and poisonous substances, may, nevertheless, have a high tuberculosis rate, simply because of the "speeding up" -- the excessive fatigue -- of the workers. Girls who work each day to the very limit of their strength cannot fully [page 2] recuperate during the night, and are therefore constantly in a condition of lowered resistance to tuberculous infection.

We choose as subjects for our study four trades, two of them light and not exhausting except for the speed required, -- the paper-box makers and the glove-makers, -- and two heavier, -- the overall-makers and core-makers. This summer was not altogether favorable for such an investigation, because most factories were working short-time -- four and a half days or less. Still the girls in some places were showing the effects of exhaustion as much as, or even more than, when working full time, for they were speeding madly in the effort to approximate their usual wages. Some girls told us that they worked with a clock beside them, and tried each day to break their record of the day before at a given hour.

It was easy to convince ourselves of the fact that the "piece-work" system as it is usually carried on is the cause of very great fatigue in girls, but we failed to secure scientific proof, as we had hoped to do. The machine which we were advised to use, the ergograph, which is in use in physiologic laboratories, failed to give logical and consistent results.

Evidently the scientific testing of chronic fatigue is a complicated matter. The weariness of one day extends over to the following day, so that the worker does not begin the morning in a normal condition, but with a sluggish circulation and a great disinclination to effort. After an hour or so she "gets into the swing," her circulation is more active, she begins to work more easily. Then comes usually a second period of depression, which may last until the end of the day, but is often followed by second burst of activity -- when the girl sees that the day is almost over and "spurts" for the last hour or two. Some girls declare that the morning is the hardest time; others, the hours from two to four in the afternoon.

A well-planned series of tests applied to a group of "piece-workers" and to an equal number of women employed in work of the same character, but without the excessive speed, would, we feel convinced, show that "piece-work" is far more exhausting than work done at a natural rate of speed. And, since excessive fatigue lowers the resistance to infection, the "piece-work" system as it is now carried on undeniably plays a part in the tuberculosis of factory workers.

At the Sixth International Congress on Tuberculosis in Washington, D.C., Addams and Hamilton discuss "Economic Aspects of Tuberculosis" and why people living in poverty are more susceptible to the disease.

Addams, Jane, and Alice Hamilton, MD. "The 'Piece-Work' System as a Factor in the Tuberculosis of Wage-Workers" Transactions of the Sixth International Congress on Tuberculosis, 6 vols. (1908): 3:139-40.

B-TSICT - Transactions of the Sixth International Congress on Tuberculosis, Volume 4 (1908)

Addams, Jane and Hamilton, Alice, “The "Piece-Work" System as a Factor in the Tuberculosis of Wage-Workers, 1908,” Jane Addams Digital Edition, accessed October 25, 2020, https://digital.janeaddams.ramapo.edu/items/show/6944.