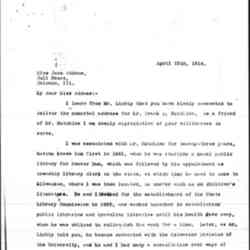 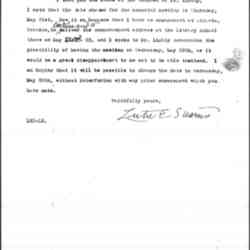 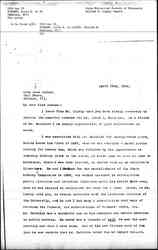 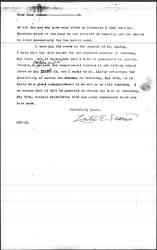 I learn from Mr. Lighty that you have kindly consented to deliver the memorial address for Mr. Frank A. Hutchins. As a friend of Mr. Hutchins I am deeply appreciative of your willingness to serve.

I was associated with Mr. Hutchins for twenty-three years, having known him first in 1891, when he was starting a model public library for Beaver Dam, which was followed by his appointment as township library clerk to the state, at which time he used to come to Milwaukee, where I was then located, to confer with me on children's literature. He and I [worked] for the establishment of the State Library Commission in 1895, and worked together in establishing public libraries and traveling libraries until his health gave away, when he was obliged to relinquish the work for a time. Later, as Mr. Lighty told you, he became connected with the Extension Division of the University, and he and I had many a consultation over ways of reaching the farmers, the organizations of farmers' clubs, etc. Mr. Hutchins was a wonderful man in his absolute and heroic devotion to public service. He never had a thought of self. He was the most [unworldly] man that I ever knew. One of his men friends said of him that he was certain that Mr. Hutchins never had an impure thought. [page 2] Of all the men who have ever lived in Wisconsin I feel that Mr. Hutchins stood at the head in his interest in humanity and his desire to labor unceasingly for the public good.

I send you the above at the request of Mr. Lighty. I note that the date chosen for the memorial meeting is Thursday, May 21st. Now it so happens that I have an engagement at Atlanta, Georgia, to <lecture and to> deliver the commencement address at the Library School there on May 22nd-23, and I spoke to Mr. Lighty concerning the possibility of having the meeting on Wednesday, May 20th, as it would be a great disappointment to me not to be able to attend. I am hoping that it will be possible to change the date to Wednesday, May 20th, without interfering with any prior engagement which you have made. 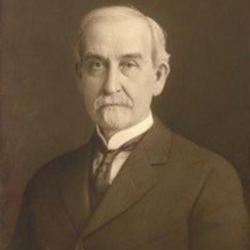 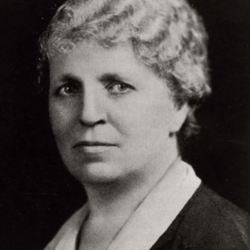 Sterns writes to Addams about Frank A. Hutchins and the memorial meeting that is being held in his honor and requests that the date be changed.