Comments about a League for the Protection of Children, June 29, 1908 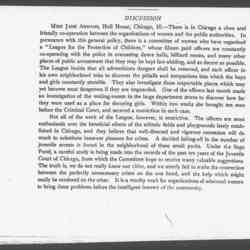 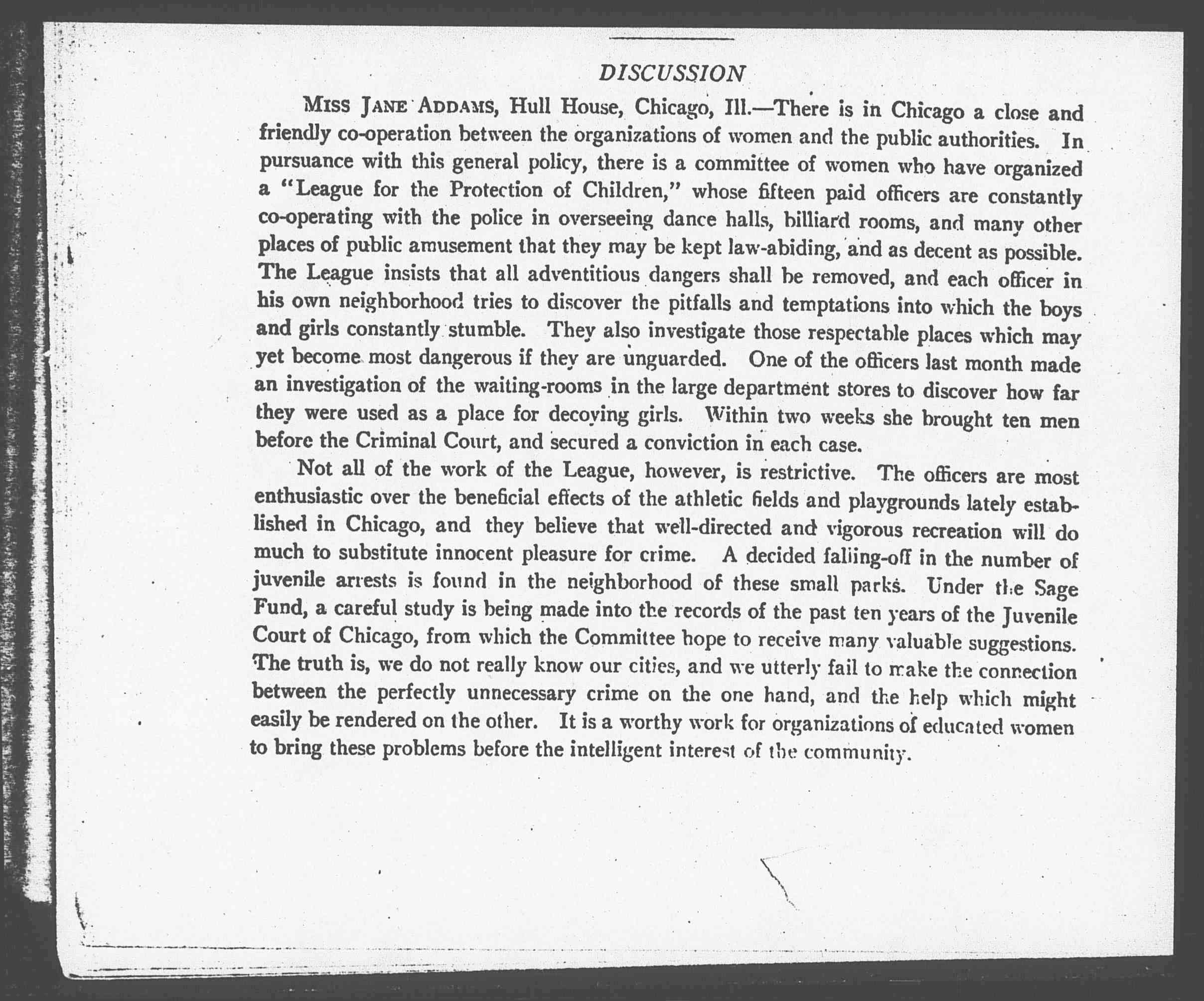 MISS JANE ADDAMS, Hull House, Chicago, Ill. -- There is in Chicago a close and friendly [cooperation] between the organizations of women and the public authorities. In pursuance with this general policy, there is a committee of women who have organized a "League for the Protection of Children," whose fifteen paid officers are constantly [cooperating] with the police in overseeing dance halls, billiard rooms, and many other places of public amusement that they may be kept law-abiding, and as decent as possible. The League insists that all adventitious dangers shall be removed, and each officer in his own neighborhood tries to discover the pitfalls and temptations into which the boys and girls constantly stumble. They also investigate those respectable places which may yet become most dangerous if they are unguarded. One of the officers last month made an investigation of the waiting rooms in the large department stores to discover how far they were used as a place for decoying girls. Within two weeks she brought ten men before the Criminal Court, and secured a conviction in each case.

Not all of the work of the League, however, is restrictive. The officers are most enthusiastic over the beneficial effects of the athletic fields and playgrounds lately established in Chicago, and they believe that well-directed and vigorous recreation will do much to substitute innocent pleasure for crime. A decided falling-off in the number of juvenile arrests is found in the neighborhood of these small parks. Under the Sage Fund, a careful study is being made into the records of the past ten years of the Juvenile Court of Chicago, from which the Committee hope to receive many valuable suggestions. The truth is, we do not really know our cities, and we utterly fail to make the connection between the perfectly unnecessary crime on the one hand, and the help which might easily be rendered on the other. It is worthy work for organizations of educated women to bring these problems before the intelligent interest of the community.

Addams discusses the work of the League for the Protection of Children, formed to advocate for the well being of children in Chicago. The comments were made during the National Education Association meeting.

Addams, Jane. "Discussion [of a 'League for the Protection of Children']." National Education Association, Journal of Proceedings and Addresses 46 (1908): 1228.