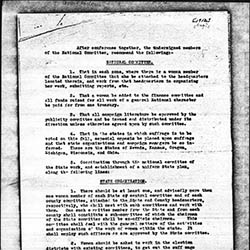 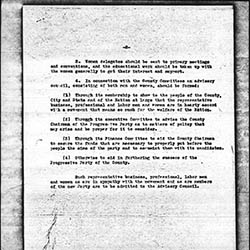 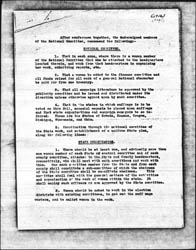 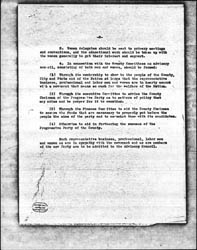 After conference together, the undersigned members of the National Committee, recommend the following:-

1. That in each zone, where there is a women member of the National Committee that she be attached to the headquarters located therein, and work from that headquarters in [organizing] her work, submitting reports, etc.

2. That a woman be added to the finance committee and all funds raised for all work of a general National character be paid for from one treasury.

3. That all campaign literature be approved by the publicity committee and be issued and distributed under its direction unless otherwise agreed upon by such committee.

4. That in the states in which suffrage is to be voted on this fall, especial emphasis be placed upon suffrage and that state organizations and campaign managers be so informed. These are the States of Nevada, Kansas, Oregon, Michigan, Wisconsin, and Ohio.

5. Coordination through the national committee of the State work, and establishment of a uniform State plan, along the following lines:

1. There should be at least one, and advisedly more than one woman member of each State or central committee and of each county committee, attached to the State and County headquarters, respectively, who shall meet with such committees and work with them. One such committee member from the State and from each county shall constitute a sub-committee of which the chairman of the State committee shall be ex-officio chairman. This committee shall deal with the general matters of the activities and organization of the work of women within the state. It shall employ such officers as are approved by the State committee.

2. Women should be asked to work in the election districts with existing committees, to get out the suffrage workers, and to enlist women in the work. [page 2]

3. Women delegates should be sent to primary meetings and conventions, and the educational work should be taken up with the women generally to get their interest and support.

4. In connection with the County Committees an advisory council, consisting of both men and women, should be formed:

(1) Through its membership to show to the people of the County, City and State and of the Nation at large that the representative business, professional and labor men and women are in hearty accord with a movement that means so much for the welfare of the Nation.

(2) Through its executive Committee to advise the County Chairman of the Progressive Party  as to matters of policy that may arise and be proper for it to consider.

(3) Through its Finance Committee to aid the County Chairman to secure the funds that are necessary to properly put before the people the aims of the party and to acquaint them with the candidates.

(4) Otherwise to aid in furthering the success of the Progressive Party of the County.

Such representative business, professional, labor men and women as are in sympathy with the movement and as are members of the new Party are to be admitted to Advisory Council.

The National Progressive Party plans for the involvement of women after a conference.