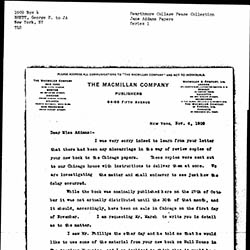 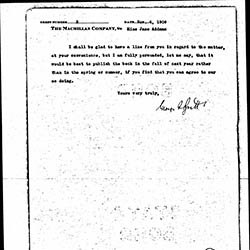 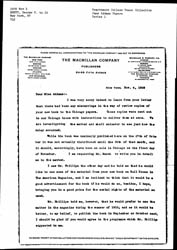 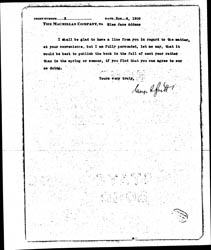 I was very sorry indeed to learn from your letter that there had been any miscarriage in the way of review copies of your new book to the Chicago papers. These copies were sent out to our Chicago house with instructions to deliver them at once. We are investigating the matter and shall endeavor to see just how the delay occurred.

While the book was nominally published here on the 27th of October it was not actually distributed until the 30th of that month, and it should, accordingly, have been on sale in Chicago on the first day of November. I am requesting Mr. Marsh to write you in detail as to the matter.

I saw Mr. Phillips the other day and he told me that he would like to use some of the material from your new book on Hull House in The American Magazine, and I am inclined to think that it would be a good advertisement for the book if he would do so, besides, I hope, bringing you in a good price for the serial rights of the material so used.

Mr. Phillips told me, however, that he would prefer to use the matter in the magazine during the summer of 1910, and as it would be better, to my belief, to publish the book in September or October next, I should be glad if you would agree to the [program] which Mr. Phillips suggested to me. [page 2]

I shall be glad to have a line from you in regard to the matter, at your convenience, but I am fully persuaded, let me say, that it would be best to publish the book in the fall of next year rather than in the spring or summer, if you find that you can agree to our so doing. 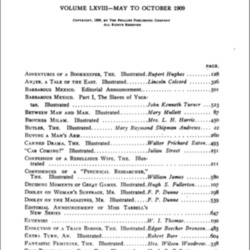 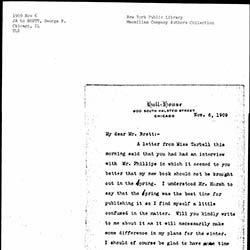 Brett apologizes on some late delivery of Addams' new book, The Spirit of Youth and the City Streets and discusses a plan for publication of her new book and the printing of some of that book's material in The American Magazine.