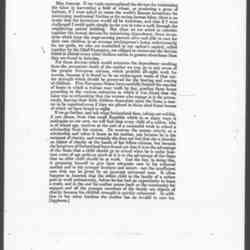 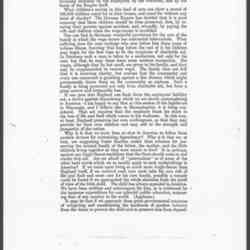 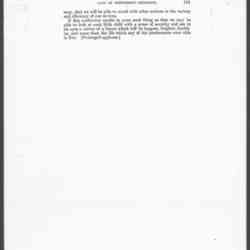 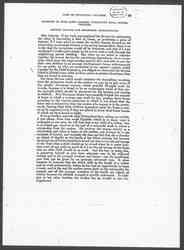 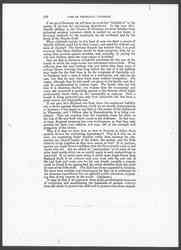 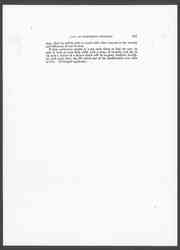 Miss ADDAMS. If my topic contemplated the devices for minimizing the labor in harvesting a field of wheat, or producing a gross of buttons, if I were asked to name the world's famous inventions for minimizing mechanical friction or for saving human labor, there is no doubt that the inventions would all be American, and that if I were challenged I could quite simply invite you to take a walk through the neighboring patent building. But when we are asked to consider together the newest devices for minimizing dependency, those inventions which keep the wage-earning parents alive and able to care for their own children in an average workingman's home, unfortunately for our pride, we who are assembled in our nation's capitol, called together by the Chief Executive, are obliged to enumerate the devices found in almost every other modern nation in greater abundance than they are found in America.

For those devices which would minimize the dependency resulting from the premature death of the mother we may go to any seven of the greater European nations, which prohibit all-night work for women, because it is found to be an extravagant waste of that tender strength which should be preserved for the bearing and rearing of children. Five European States have carefully limited the number of hours in which a woman may work by day, grading those hours according to the various industries in which it was found that the labor was so exhausting that the women who engage in it die prematurely, leaving their little children dependent upon the State, a matter to be regretted even if they are placed in those ideal foster homes of which we have heard [tonight].

If we go further, and ask what Switzerland does, taking our exhibit, if you please, from that small Republic which in so many ways is analogous to our own, we will find that every child of a widow, who is of school age, receives at the end of a successful week in school a scholarship from his canton. He receives the money strictly as a scholarship and takes it home to his mother, not because he is the recipient of charity, and certainly she does not feel that she is thereby an object of charity at the hands of her fellow-citizens, but because the lawgivers of Switzerland have found out that it is to the advantage of the State that a child should go to school when he is under fourteen years of age quite as much as it is to the advantage of the State that an older child should be at work. And the boy, in doing this, is preparing himself to give later adequate care to his widowed mother and to his younger brothers and sisters -- not the insufficient care that can be given by an ignorant untrained man. It often happens in America that the eldest child in the family of a widow goes to work prematurely, before he has had an opportunity to learn a trade, and in the end his mother comes back on the community for support and all the younger members of the family are objects of charity because his childish strength is quickly exhausted. In addition to her other burdens the mother has an invalid to care for. [Applause.] [page 2]

If we go to Germany we will gave to mark her "Exhibit A" in the matter of devices for minimizing dependency. In the year 1904, 100,000 children in the Empire of Germany received benefits from industrial accident insurance which is carried on, as you know, in Germany mutually by the employers, by the workman, and by the funds of the Empire itself.

What children's society in this land of ours can show a record of 100,000 children cared for in their homes, and cared for without any taint of charity? The German Empire has decided that it is good economy that these children should be thus preserved, first, by insuring their parents against accident, and, secondly, by paying the wife and children when the wage-earner in invalided.

One can find in Germany wonderful provisions for the care of the family in which the wage-earner has contracted tuberculosis. What suffering does the man undergo who sees before him three years of tedious illness, knowing that long before the end of it his children may begin for the first time to be the recipients of charitable aid. In Germany such a man is taken to a sanitarium, not only for his care, but that he may there learn some outdoor occupation. His wages, although they be but small, are given to his family, and they may be supplemented in various ways. The family does not feel that it is receiving charity, but realizes that the community and every one concerned is guarding against a dire disaster which might permanently throw them on the community as orphans. Such a family is being protected not only from charitable aid, but from a great sorrow and irreparable loss.

If one goes into England one finds there the employers' liability act, a device against dependency which we are slowly contemplating in America -- I am happy to say that at this session of the legislature in Wisconsin, and I believe also in Massachusetts, it is being considered. That act requires that the employer bears his share in the loss of life and limb which comes to his workmen. In this way, at least, England preserves her own workingmen, so that they may provide for their own children and may add to the strength and prosperity of the nation.

Why is it that we have been so slow in America to follow these modern devices for minimizing dependency? Why is that we, at best, are suggesting foster families rather than schemes for preserving the natural family of the father, the mother, and the little children living together as they were meant to live? It is, perhaps, against our Anglo-Saxon traditions that the State should come in and render this aid. Are we afraid of "paternalism" or of some of the other hard words which we so readily apply to such undertakings in America? If we insist upon being so much more Anglo-Saxon than England itself, if we contend each man must take his own risk of life and limb and must care for his own family, possible a remedy could be found if we approached the whole situation from the point of view of the little child. The child has always appealed to America. We have been reckless and extravagant for him, as is evidenced by the immense expenditure for our splendid public education, surpassing that of any country in the world. [Applause.]

It may be that if we approach these great governmental measures of mitigating and ameliorating the harshness of modern industry from the desire to protect the child and to preserve him from dependency [page 3], that we will be able to stand with other nations in the variety and efficiency of our devices.

If this conference results in some such thing as that we may be able to look at each little child with a sense of security and see in his eyes a mirror of a future which will be happier, brighter, healthier, and saner than the life which any of his predecessors were able to live. [Prolonged applause.]

Addams compares the United States' treatment of women and children in labor to the ways of European countries. This speech was given at public meeting associated with the Conference on the Care of Dependent Children, in Washington, D.C. on January 25, 1909.