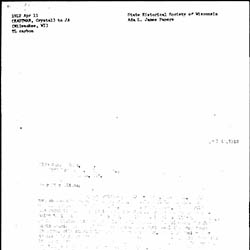 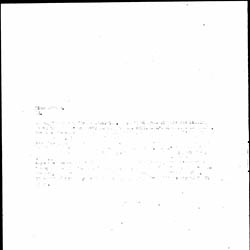 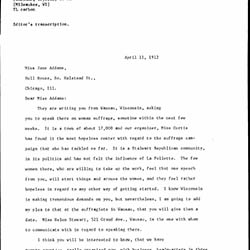 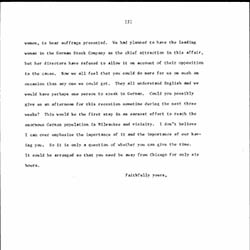 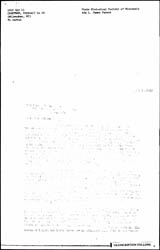 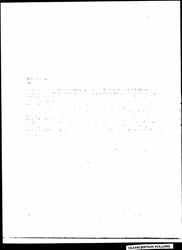 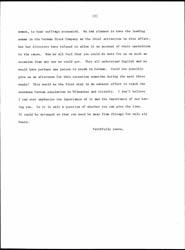 They are writing you from Wausau, Wisconsin, asking you to speak there on woman suffrage, sometime within the next few weeks. It is a town of about 17,000 and our organizer, Miss Curtis has found it the most hopeless center with regard to the suffrage campaign that she has tackled so far. It is a Stalwart Republican community, in its politics and has not felt the influence of La Follette. The few women there, who are willing to take up the work, feel that one speech from you, will start things and arouse the women, and they feel rather hopeless in regard to any other way of getting started. I know Wisconsin is making tremendous demands on you, but nevertheless, I am going to add my plea to that [of] the suffragists in Wausau, that you will give them a date. Miss Helen Stewart, 521 Grand Ave., Wausau, is the one with whom to communicate with in regard to speaking there.

I think you will be interested to know, that we have twenty counties really organized now, with business headquarters in three, and special letter heads in five or six. We have five organizers at work now, and expect to complete the state by the first of July. Then we can plunge into our summer campaign and be in communication with a responsible [group] of suffragists in every locality. I am convinced that this is the only way we can win in Wisconsin, because it is now a well known fact, that the German American Alliance is quietly organizing all over the state with the money of the brewers' back of it. The only way to meet an organized opposition like that, is with a better organized opposition and that is what we are aiming for.

Sometime ago, Miss Baer wrote you, in regard to publishing the whole or part of the addresses you gave in Wisconsin. How soon can we have these. We are particularly eager to get it, because we plan to make a translation into German, and use it as our chief weapon among the German women. That brings me to one final request. We have every reason to hope that Miss Emily Nunnemacher, a wealthy German woman in Milwaukee will open her large house for an afternoon reception to the German [page 2] women, to hear suffrage presented. We had planned to have the leading woman in the German Stock Company as the chief attraction in this affair, but her directors have refused to allow it on account of their opposition to the cause. Now we all feel that you could do more for us on such an occasion than any one we could get. They all understand English and we would have perhaps one person to speak in German. Could you possibly give us an afternoon for this reception sometime during the next three weeks? This would be the first step in an earnest effort to reach the enormous German population in Milwaukee and vicinity. I don't believe I can over emphasize the importance of it and the importance of our having you. So it is only a question of whether you can give the time. It could be arranged so that you need be away from Chicago for only six hours. 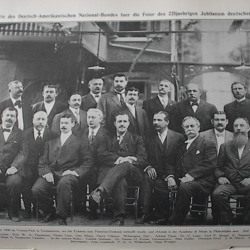 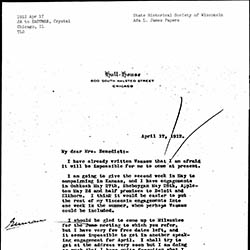 Eastman asks Addams to speak in Wausau, Wisconsin, where her voice might be the suffrage movement's best hope in the conservative Republican town.

The text is from an editor's transcription, because the original image is significantly faded.