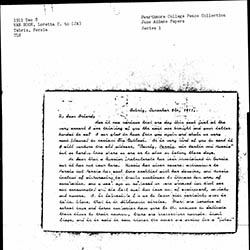 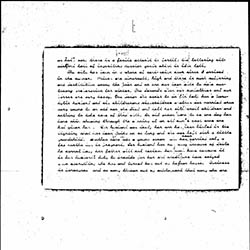 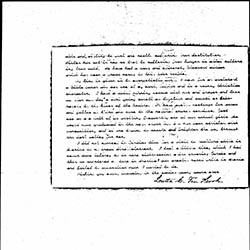 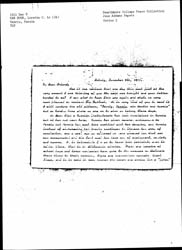 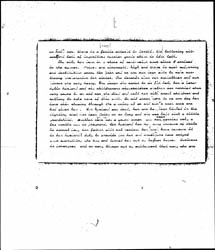 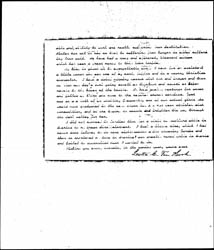 Was it not curious that one day this [week] just at the very moment I was thinking of you the mail was brought and your letter handed to me? I was glad to hear from you again and shall be very much pleased to [receive] The Outlook. It is very kind of you to send it. I will venture the old address, "Tabriz, Persia. via Berlin and Russia" but we hardly know where we are or to whom we belong these days.

We hear that a Russian protectorate has been proclaimed in Europe but it has not been here. Russia has given several ultimatums to Persia but Persia has each time complied with her demands, and Russia instead of [illegible] her troops continues to increase her area of occupation and a week ago we supposed we were annexed but that was not consummated and the last week has been one of excitement, anxiety and rumors. It is impossible for us to learn with certainty what is taking place, that is in diplomatic circles. There are parades of school boys and large companies have gone to the [mosques to] dedicate their lives to their country, there are processions carrying black flags, and it is said in some places the women are arming for a "[jihad]" [page 2] or holy war. There is a feeble attempt to fortify the tottering [citizens'?] talk of boycotting Russian goods which is idle talk.

The city has been in a state of semi-siege ever since I arrived in the summer. Prices are abnormally high and there is much suffering and destitution among the poor and no one has been able to make customary preparation for winter. The demands upon our sympathies and our purses are very heavy. One woman who comes to us for help has a paralytic husband and six children another was married when very young to an old man who died and left her with small children and nothing to take care of them with. An old woman came to me one day her bare skin showing through the opening of an old man's coat some one had given her. Her husband was dead, her son had been killed in the fighting that has been going on so long and she was left with a little grandchild. Another case was a young woman who has <been> married only a few months [and] is pregnant. Her husband has run away because of debts he cannot pay, her father will not receive her back home because it is her husband's duty to provide for her and creditors have seized upon everything she has and turned her out of [her own?] house. Business is paralyzed and so many thrown out of employment that many who are [page 3] able and willing to work are really suffering from destitution. Winter has set in now so that to suffering from hunger is added suffering from cold. We have had a long and extremely pleasant autumn which has been a great mercy to this poor people.

My time is given in to evangelistic work. I have for an assistant a Bible woman who was one of my early pupils and is a lovely Christian character. I have a daily morning lesson with her and prayer and then we plan our day's work going sometimes together and sometimes separately to the homes of the people. We have weekly meetings for women and follow up those who come to the regular church services. Just now we are both of us visiting frequently one of our school girls who would have graduated in the [illegible] class but she has been stricken with consumption, and we are trying to smooth and brighten the way through the dark valley for her.

I did not succeed in finding time for a visit to Rockford while in America to my great disappointment. I took a little time, which I had never done before, to do some sight-seeing while crossing Europe and that so shortened my time in America. I was greatly [tired?] while in America and failed to accomplish much I wanted to do.

Wishing you every blessing in the coming year, yours ever 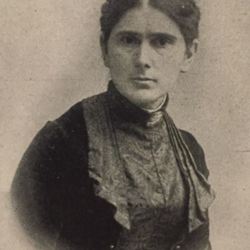 Van Hook writes Addams about her missionary work in Persia and the suffering of the people there.