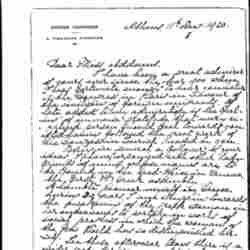 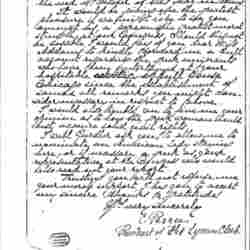 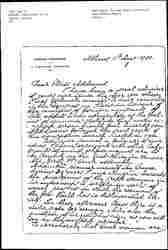 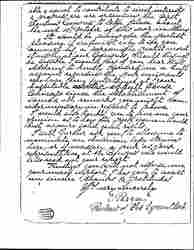 I have been a great admirer of yours ever since the year 1900 when I was fortunate enough to hear you lecture at the Congress in Paris in [favor] of the civilizing of foreign emigrants. Of late, added to my admiration is the feeling of immense gratitude that every civilized person should feel towards you after having followed the great work of the Congress in Zurich headed by you.

Being in general a follower of your ideas, I have organized with other lady-friends of mine whose names are to be found in the Head-Office in Geneva, the First (1st) Greek assembly.

A humble pioneer myself in Greece during 30 years, I am struggling towards the awakening of the Greek woman in her [endeavors] to partake in works of social progress in which the woman of the New World has so distinguished herself.

In these after-war days, there is a wider scope for woman, & here also the question of her rights has risen, as you will see by the enclosed circular.

To corroborate that Greek women are [page 2] able & equal to contribute to civil interests & progress we are organizing the first Women's Congress to take place about the end of October of this year in Athens.

It would be giving me the greatest pleasure if we might hope to see you amongst us, a paragon of the greatest moral strength, at our Congress. Should this not be possible, I would beg of you, dear [Miss] Addams, to kindly forward me a full account regarding the Greek emigrants who have been entertained at your hospitable [illegible] of Hull House Chicago since the establishment of same & all remarks you might consider necessary in respect to above.

I would also trouble you to give me your opinion as to how the Greek woman should best acquire solid, civil rights.

I will further ask you to allow me to nominate an American lady staying here, or if necessary, a Greek as your representative at the Congress who would also read out your report.

Trusting you will not refuse me your moral support, I beg you to accept my sincere thanks & gratitude!

Parren invites Addams to attend or send a representative to the first Women's Congress to be held in Greece.