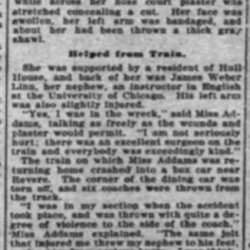 Miss Jane Addams of Hull House arrived in Chicago from Los Angeles last night with her cheeks bruised and swollen, her nose cut, and her left arm bandaged. Her injuries were sustained in a wreck on the Santa Fe road at Revere, Mo., at 10 o'clock yesterday morning.

Miss Addams was the first club woman to arrive from the biennial meeting of the General Federation of Women's Clubs, but the casual observer would scarcely have recognized the leader of Hull House in the figure that alighted from a coach at the Dearborn Street station last night.

There were two severe scratches on her left cheek, and an ugly bruise on her right, while across her nose court plaster was stretched concealing a cut. Her face was swollen, her left arm was bandaged, and about her had been thrown a thick gray shawl.

She was supported by a resident of Hull House, and back of her was James Weber Linn, her nephew, an instructor in English at the University of Chicago. His left arm was also slightly injured.

"Yes, I was in the wreck," said Miss Addams, talking as freely as the wounds and plaster would permit. "I am not seriously hurt; there was an excellent surgeon on the train and everybody was exceedingly kind."

The train on which Miss Addams was returning home crashed into a box car near Revere. The corner of the dining car was torn off, and six coaches were thrown from the track.

"I was in my section when the accident took place, and was thrown with quite a degree of violence to the side of the coach," Miss Addams explained. "The same jolt that injured me threw my nephew to his feet, saving him from serious hurts. I was thinking of something else at the time and didn't have time to make any effort to save myself. The crash came without warning."

Miss Addams telegraphed Hull House at noon yesterday: "Do not worry; I will arrive tonight."

And the residents asked, "Why worry? What's wrong?" Then, after a series of telegraphing the accident was discovered, and her [coworkers] were at the station to meet her.

"It was an interesting meeting," said Miss Addams, referring to the biennial. "One of the best I ever attended. America and the world should be proud of it."

At the train were Mrs. Charles Gunther and H. N. Higinbotham of this city, and it was widely whispered at the depot that Mr. Higinbotham came through the wreck safely, but was bitten by his dog at the close of the journey. Not a serious matter, it was announced. 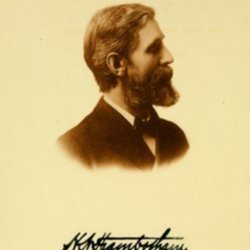 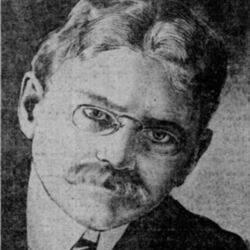 Addams reflects on the railroad crash she endured and gives her impressions of the General Federation of Women's Clubs meeting.