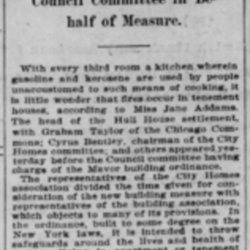 With every third room a kitchen wherein gasoline and kerosene are used by people unaccustomed to such means of cooking, it is little wonder that fires occur in tenement houses, according to Miss Jane Addams. The head of the Hull House settlement, with Graham Taylor of the Chicago Commons; Cyrus Bentley, chairman of the City Homes committee; and others appeared yesterday before the Council committee having charge of the Mavor building ordinance.

The representatives of the City Homes Association divided the time given for consideration of the new building measure with representatives of the building association, which objects to many of its provisions. In the ordinance, built to some degree on the New York laws, it is intended to throw safeguards around the lives and health of persons living in apartment or tenement houses.

Tenants Should Be Protected.

"What is of most vital importance," said Miss Addams, "is the protection of the tenants from fire and from the dangers of unsanitary conditions. One particular house across from where I live has been on fire four times within my recollection. These houses are occupied by different nationalities. Every third room is used for cooking, and gasoline and kerosene are coming into more frequent use. The people are careless in the use of this fuel.

"There is another vital point in the subject which concerns the health of the tenants. Many of the people who occupy these apartment houses come from the villages and farms of Italy and Russia. They are not accustomed to the cramped condition of city life, and it is important that they should have light and air in their homes.

"We have not in Chicago the conditions which exist in New York, and there is no reason why we should have. Every time I see the tenement houses of New York I thank Providence that we have not got them in Chicago."