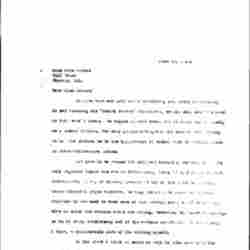 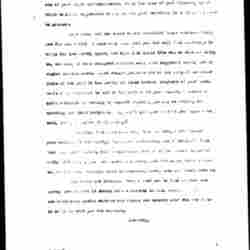 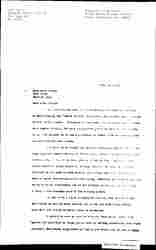 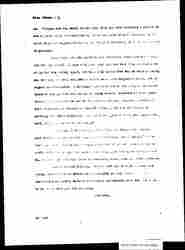 In line with our Long Beach breakfast, Mr. Devine is buckling in and resuming his "Social Forces" department, as you will see announced in this week's issue. He begins it next week; and we shall run it weekly as a summer feature, for many people throughout the country are seeking to [hire?] for counsel as to the application of [social] work to wartime needs in these affirmative months.

Our plan is to resume the unsigned editorial department [in] the July magazine number and run it fortnightly, three or four pages in each instalment. [I] am, of course, drawing on all of the staff in getting these editorial pages together, as they should have [quite an] organic relation to the week to week work of the Survey; and I am of course the wire on which the various beads are strung, recasting and blue-penciling, so as to bring consistency out of the various contributions; and doing, I hope, a considerable part of the writing myself.

At the start I think it would be well to make sure that the war topics do not too much engross the space, and also begin pretty much with the things in which there is consensus.

I should be ever so glad to have you help me in giving real spirit and substance to these pages, both by writing occasional paragraphs yourself, and making suggestions of topics you would like to see me [write] [page 2] on. Perhaps one way would be for you, when you have dictated a letter to one of your eager correspondents, which has some of your thinking in it which would be suggestive to me, to ask your secretary to send me a [carbon] to plunder.

Here then, are two seats at our breakfast table accounted for; now for the third! I hope very much that you too will feel stirrings to write for the Survey again, and will feel quite free and at home in doing so, not only in such unsigned material as I have suggested above, but in signed contributions. Last summer you [made] one of the largest contributions of the year to the Survey in those advance chapters of your book. While I am reluctant to add to the burden of your summer, I would be quite ruthless in wanting to exploit anything you may be writing or speaking for other purposes. Why can't you give us what you [might] have said, had you spoken at Pittsburgh!

[I scarcely] feel like [pilfering] from the Long Beach volume your address at the Foreign Relations conference, but I shouldn't feel that [way about] [editing?] some single point out of it for inclusion in an early editorial page. You spoke of [leaving?] your notes, as first drafted, in Chicago. Perhaps there is something among them you could send on.

But these are details. What I want you to feel is that the Survey can be what it should be -- a natural channel through [which we?] can reach many social workers and others the country over who are eager to share in what you are thinking.