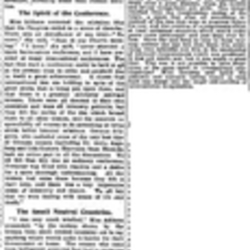 MISS JANE ADDAMS.
HER IMPRESSIONS OF THE CONGRESS OF WOMEN.

Before the meeting [tonight] at which Miss Jane Addams, who was president of the International Congress of Women at The Hague, described its work, she gave to a London representative of the “Manchester Guardian” some of her impressions. Miss Addams was reluctant to express any opinions on the crisis between America and Germany. It was obvious, however, from the conversation that the idea of America going to war with Germany is altogether abhorrent to her. She holds very strongly that the interests of America are in peace. America would have nothing to gain from going to war with Germany or with any other country. She felt certain that the situation, difficult and critical as it was, would be capable of some peaceful adjustment. Referring to the huge foreign populations in America, she remarked that for America to go to war with any European nation would inevitably bring about a most serious upheaval. She did not for a moment believe, of course, that any German-American who called himself American would take up arms against American citizens.

The situation of difficulty and strain brought about by the sinking of the Lusitania was one that would have to be adjusted by peaceful means. “What else,” she asked, “are Governments and reasonable people for!” She pointed out how many of the leading American statesmen are strong pacifists, and in this connection quoted the recent speech of Mr. Taft to the effect that before America went to war the American people would have to be consulted as to whether they wanted to go to war or not -- a sentiment, of course, very much on the lines of some of the arguments at the Women’s International Congress.

The members who attended the Congress, Miss Addams said, were from many countries, including 28 German and Austrian delegates. With regard to the absence of women from France, which has been so much commented upon, Miss Addams said that it was partly explained by the difficulty of their getting to Holland in time. It was true that a protest was sent by the French National Society for Women’s Suffrage and the National Council of Women protesting against French women meeting German women who had not protested in their own country against the conduct of the Germans in Belgium. This protest did not reach The Hague until the Congress was over, and was not intentionally suppressed, as some French newspapers appear to have suggested. Protests were received from other countries against the holding of the Congress, but none of them were read, nor, on the other hand, were the enormous number of congratulatory messages, including many from French societies.

The Spirit of the Conference.

Miss Addams corrected the mistaken idea that the Congress ended in a scene of disorder. There was no disturbance of any kind -- "No more,” she said, “than at any Church meeting.” “I have,” she said, “never attended a more harmonious conference, and I have presided at many international conferences. The fact that such a conference could be held at all at the present time in order and goodwill was in itself a great achievement. It shows that international ties are holding in spite of the great strain that is being put upon them, and that there is a genuine solidarity amongst women. These were all devoted to their own countries and were all intensely patriotic, but they felt the reality of the ties which bound them to all other women, and the common responsibility of women to do something to bring about better internal relations. German delegates, who included some of the very best type of German women (including Dr. Anita [Augspurg] and Lida Gustava Heymann from Munich), took an active part in all the discussions. We all felt that this was no ordinary conference. Everyone was filled with emotion and a desire for a more thorough understanding. All the women had come there because they felt it their duty, and there was a very impressive sense of solemnity and sorrow. We all felt that we were dealing with issues of life and death.”

“I was very much touched,” Miss Addams proceeded, “by the anxiety shown by the women from small neutral countries not to say anything which would make it harder for their Government at home. The women who came from belligerent countries had had to overcome great popular opposition to the Congress. One of the most touching speeches was made by an Austrian woman who had been in charge of a military hospital in Vienna.

Referring to the resolution which was passed in [favor] of the creation of a permanent international conference, in which women should take part, to make practical proposals for international [cooperation] among States, Miss Addams pointed out that the Congress of Vienna, which closed the Napoleonic wars, passed resolutions against the slave trade, because it was felt that slave-holding was a fruitful cause of war.

Effect of the War on Women’s Position.

“We felt,” said Miss Addams, “that if it was possible to convince the various Governments that the participation of women in government would make against war it might be feasible to bring about the incorporation of women in the work of government as a means of avoiding war. As one result of the great wars a century ago was to give Frenchwomen much larger scope in industrial life than they had had before, so after this war larger opportunities in social and political life might be opened for women. No one yet knows what the effect upon women’s position of this war will be. We hope that when the peace terms are being discussed an international congress of women will be held at the same time for the purpose of making practical proposals for permanent peace in the same way that voluntary conferences are held simultaneously with the Hague Conferences in the hope of influencing their decisions.

“The Conference took up a strong attitude in demanding democratic control of foreign policy, meaning by democratic equal representation among men and women. Many wars have been brought about more or less by a secret diplomacy which the people do not understand. In America we are urging that all treaties should be confirmed by both Houses and not the Senate only, as at present, before they become operative. In England, I believe, treaties may be made by the Ministers without the knowledge of the people. We think that in every case the representatives of the people should vote upon the terms of the treaty. I would go further, and say that no country should go to war unless the consent of the people had been obtained. This, of course, is where the demand of women for political enfranchisement comes in. The women, who suffer from war just as much as men, have an equal right to be consulted.”

Miss Addams added that a delegation was appointed at the Congress to visit the various capitals, and to bring the decisions of the Congress to the responsible Ministers. The women are at present visiting the Scandinavian countries, and will in due course come to London for this purpose.

LESSONS OF THE WOMEN’S CONGRESS.

Miss Jane Addams received a cordial public welcome [tonight] when she was the chief speaker at a women’s meeting in the Kingsway Hall, called to hear a report of the Hague Congress from delegates who were present. Miss K. [D.] Courtney, one of the three British delegates who succeeded in reaching The Hague, was one of the speakers. Lord and Lady Courtney of Penwith and Mr. Philip Snowden, M.P., were among those present, and messages were read from Miss Margaret Ashton, Mrs. Sidney Webb, Mr. Charles Trevelyan, M.P., Mr. Keir Hardie, M.P., and other well-known people, who all spoke of the Women’s Congress as giving a hope in dark times of better international relations in the future. A resolution was carried expressing fellowship and sympathy with the sufferers in the war and pledging women “with a deep sense” of our common responsibility for the failure to prevent wars in the past, to strive for understanding and reconciliation between the peoples and for the establishment of a just and lasting peace.”

Mr. F. T. Swanwick, from the chair, said that it was a dreadful thought that they should leave those who made the war to make the peace. In that case the end would only come with the exhaustion of one or more of the combatants, with the prospect after there had been time for a revival of forces of [a renewal] of the “mindless and kindless contest.” The women met at The Hague in the belief that very many people were hungering for constructive ideas to be put forward. To stop the work of reconciliation and reconstruction because the Germans had torpedoed the Lusitania and were poisoning our soldiers with gas, was like saying to a temperance worker, when a man in a drunken frenzy had murdered a child, “surely now you will abandon your efforts to remove the curse of drunkenness.” If every one of the rules of the devil’s game called war had been scrupulously observed by all the belligerents that would not have concealed the fact that it was the devil’s game. But if women wanted peace they must do more than make incantations for peace.

Miss Addams said that the prominent fact of the Congress was that it proved the reality of international ties, even in the midst of the overwhelming strain of war. “I have had a long training in internationalism,” she said, “in the immigrant quarter of Chicago, into which pour constantly people from all the [countries] of Europe. They begin by not understanding each other in the least, but in the end there comes to be a curious fusing and understanding, and in assertion of important things which bind together and in that work of fusion the women take a leading part.” The same feeling of unity was expressed at the Congress, to which came women from the belligerent as well as from the neutral countries. Women came who had lost relatives at the front, anxious to confer for a time on the wider issues of life and death, and to look forward to a time when war should be no more. They talked as people talked in the chamber of death after a great disaster, when the foolish and trivial things were put aside. Two things resulted from the Congress: an easing of the heart, a sense that after all something remained of the ties that were so precious before the war, and the creation of a [program] which at least contained elements which would make peace more permanent and just than ever before. Since she had been so near to these warring nations she had felt that there was something very splendid and fine in the awakening of national consciousness which was produced. It was not worth war, but it was worth a great deal. Why was it not possible to have something of the same spirit in international relationships? With devotion and belief the patriotic and national feeling would in time melt and merge into the larger self-sacrifice of international [cooperation]. 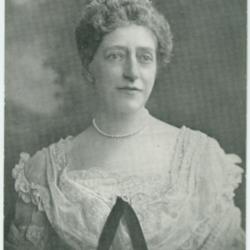 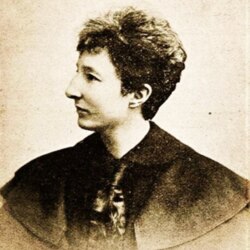 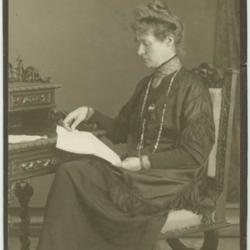 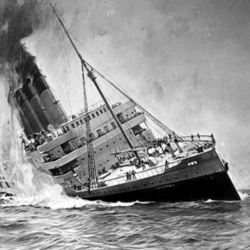 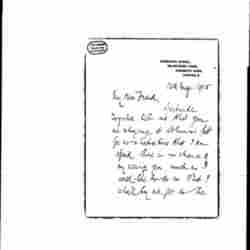 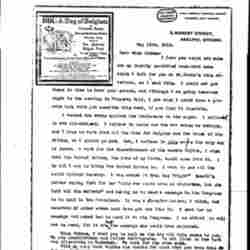 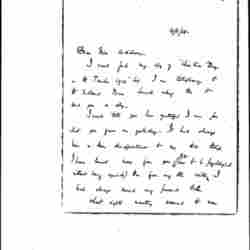 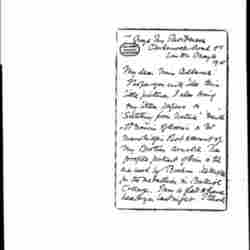 Addams tells a reporter from the Manchester Guardian her impressions of the International Congress of Women. A short summary of her remarks at Kingsway hall is also included.