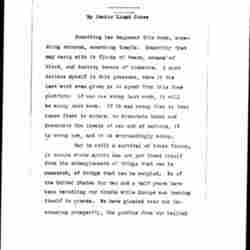 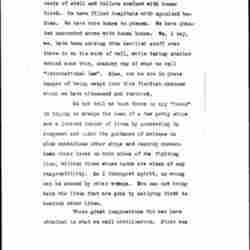 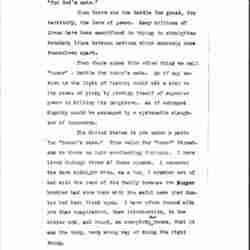 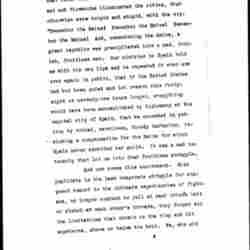 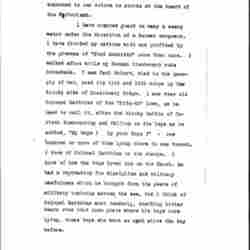 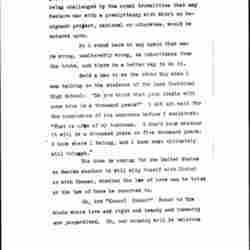 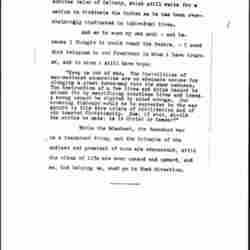 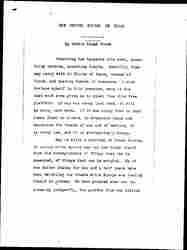 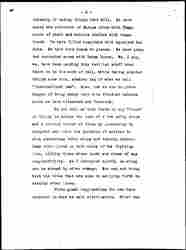 THE UNITED STATES ON TRIAL

Something has happened this week, something ominous, something tragic. Something that may carry with it floods of tears, oceans' of blood, and destroy towers of treasure. I must declare myself in this presence, were it the last word even given me to speak from this free platform: if war was wrong last week, it will be wrong next week. If it was wrong then to tear human flesh to shreds, to devastate homes and desecrate the ideals of men and of nations, it is wrong now, and it is everlastingly wrong.

War is still a survival of brute forces. It occurs where spirit has not yet freed itself from the entanglements of things that can be measured, of things that can be weighed. We of the United States for two and a half years have been twiddling our thumbs while Europe was tearing itself to pieces. We have gloated over our increasing prosperity, the profits from our hellish [page 2] industry of making things that kill. We have sowed the continent of Europe thick with fragments of shell and bullets stained with human blood. We have filled hospitals with agonized bodies. We have torn homes to pieces. We have planted uncounted acres with human bones. We, I say, we, have been sending this devilish stuff over there to do the work of hell, while taking shelter behind some thin, shadowy rag of what we call "international law". Alas, now we are in grave danger of being swept into this fiendish madness which we have witnessed and fostered.

Do not tell me that there is any "honor" in trying to avenge the loss of a few petty ships and a limited number of lives by proceeding by conquest and under the guidance of science to sink numberless other ships and destroy numberless other lives on both sides of the fighting line, killing those whose hands are clean of any responsibility. As I interpret spirit, no wrong can be atoned by other wrongs. You can not bring back the lives that are gone by sallying forth to destroy other lives.

Three great inspirations for war have obtained in what we call civilization. First was [page 3] the battle for God. Some of the hardest battles of history were devoted to religion; they were "for God's sake."

Then there was the battle for greed, for territory, the love of power. Many millions of lives have been sacrificed in trying to straighten boundary lines between nations which scarcely knew themselves apart.

Then there comes this other thing we call "honor" -- battle for honor's sake. As if any nation in the light of history could add a star to its crown of glory by proving itself of superior power in killing its neighbors. As if outraged dignity could be assuaged by a systematic slaughter of innocents.

The United States is now under a panic for "honor's sake." This valor for "honor" threatens to throw us into everlasting dishonor. I have lived through three of these spasms. I remember the dark midnight when, as a boy, I crawled out of bed with the rest of the family because the bigger brother had come home with the awful news that Sumter had been fired upon. I have often traced with you that inspiration, that intoxication, to the bitter end, and found, as everybody <now> knows, that it was the very, very wrong way of doing the right thing. [page 4]

I remember, as most of you remember, that other time when the flags climbed to the highest and fireworks illuminated the cities, that otherwise were torpid and stupid, with the cry: "Remember the Maine! Remember the Maine! Remember the Maine!" And, remembering the Maine, a great republic was precipitated into a mad, foolish, fruitless war. Our minister to Spain told me with his own lips and he repeated it over and over again in public, that if the United States had but been quiet and let reason rule forty-eight or seventy-two hours longer, everything would have been accomplished by diplomacy at the capital city of Spain, that we [succeeded] in getting by brutal, merciless, bloody barbarism, including a compensation for the Maine for which Spain never admitted her guilt. It was a mad intensity that let us into that fruitless struggle.

And now comes this excitement. When pugilists in the last desperate struggle for conquest resort to the ultimate expediencies of fighters, no longer content to pull at each other's hair or clutch at each other's throats, they forget all the limitations that obtain in the ring and hit anywheres, above or below the belt. We, who sit [page 5] by, witnessing all these things, seeing this desperate struggle, because our own supposed "rights" are now invaded a little bit, and our commerce is endangered, become enraged. Will we dare jump into this ring at this time to add wickedness to wickedness, and murder to murder?

May God help us to [reenforce] the spirit, that we may carry this diplomatic perplexity to the court of reason, listen to the impulses of love and take a "quarter of an hour", nationally speaking, to commune with God and with the voice within. We should go behind that ragged page, born out of expediency and cruelty, the selfishness of formality and precedent, which we call "international law", a thing of shreds and tatters, at best, born out of a false assumption that the normal relations between nations are those of rivalry and antagonism and not of a community interest.

Steps may be taken down there at Washington this week, which will strike a bloody sword deep into the flesh of this nation where a million quivering nerves, deeper than consciousness, bind us to the fatherland over there. It is international vivisection, without cause and without [page 6] profit, if we look at it even on the external side of things alone. Here our New Germany is summoned to our colors to strike at the heart of the Fatherland.

I have mounted guard on many a weary watch under the direction of a German [sergeant]. I have divided my rations with and profited by the prowess of "Fred [Schmidt]" more than once. I walked afoot while my German lieutenant rode horseback. I saw Carl Schurz, clad in the panoply of war, lead his 11th and 12th Corps up the bloody side of Missionary Ridge. I saw dear old Colonel [Matthies] of the "Fife-th" Iowa, as he used to call it, after the bloody Battle of Corinth dismounting and falling on the logs as he sobbed, "My Boys! My poor Boys!" -- one hundred or more of them lying there in one trench. I know of Colonel [Matthies] on the charge. I know of how the boys loved him on the March. He had a reputation for discipline and military usefulness which he brought from his years of military training across the sea, but I think of Colonel [Matthies] most tenderly, shedding bitter tears over that open grave where his boys were lying, those boys who were so much alive the day before. [page 7]

All the United States is quivering with gentle emotions [today] where divided loyalties are being challenged by the cruel brutalities that may declare war with a precipitancy with which no benignant project, national or otherwise, would be entered upon.

So I stand here to say again that war is wrong, unalterably wrong, an inheritance from the brute, and there is a better way to do it.

Said a man to me the other day when I was talking to the students of the Lane Technical High School: "Do you think that your ideals will come true in a thousand years?" I did not wait for the conclusion of his sentence before I exclaimed: "That is none of my business. I don't know whether it will be a thousand years or five thousand years. I know where I belong, and I know what ultimately will triumph."

The time is coming for the United States to decide whether it will ally itself with Christ or with Caesar, whether the law of love can be tried or the law of hate be resorted to.

Oh, but "Honor! Honor!" Honor to the winds where love and right and beauty and humanity are jeopardized. Oh, our country will be valorous [page 8] on sea or land, if it sallies forth, but it will be a valor allied to cowardice compared to the sublime valor of Calvary, which still waits for a nation to vindicate the Christ as he has been overwhelmingly vindicated in individual lives.

And so to ease my own soul -- not because I thought it could reach the [Center], -- I sent this telegram to our President in whom I have trusted, and in whom I still have hope:

"Keep us out of war. The incivilities of war-maddened monarchies are no adequate excuse for plunging a great democracy into the same madness. The destruction of a few lives and ships cannot be atoned for by sacrificing countless lives and homes. A wrong cannot be righted by added wrongs. Our crowning dishonor would be to surrender to the war spirit in this dire crisis of civilization and of our boasted Christianity. Now, if ever, should the choice be made: is it Christ or Caesar?"

While the blackest, the damndest war is a transient thing, and the triumphs of the noblest and greatest of wars are evanescent, still the tides of life are ever onward and upward, and we, God helping us, must go in that direction. Jenkin Lloyd Jones sermonizes against the war, asking people if they would choose Caesar over Christ.