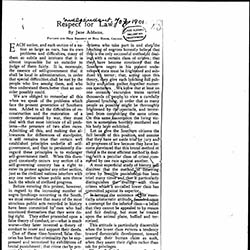 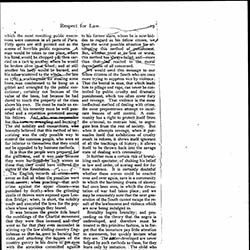 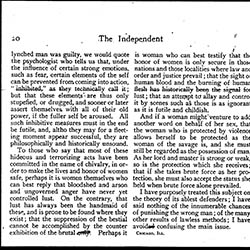 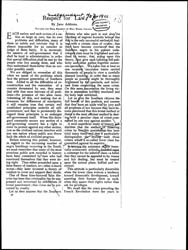 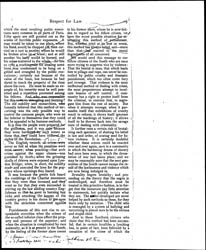 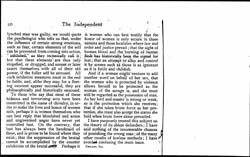 Each nation, and each section of a nation so large as ours, has its own problems and difficulties, many of them so subtle and intricate that it is almost impossible for an outsider to judge of them fairly. It is, moreover, the essence of self-government that it shall be local in administration, in order that special difficulties shall be met by the people who live among them, and who thus understand them better than an outsider possibly could.

We are obliged to remember all this when we speak of the problems which face the present generation of Southern men. Added to all the difficulties of reconstruction and the restoration of a country devastated by war, they must deal with that most intricate of all problems – the presence of two alien races. Admitting all this, and making due allowances for differences of standpoint, it still remains true that certain well established principles underlie all self-government, and that to persistently disregard these principles is to endanger self-government itself. When this disregard constantly occurs any section of a self-governing country has a right to enter its protest against any other section, just as the civilized nations interfere with any one nation whose public acts throw back the whole of civilized progress.

Before entering this protest, however, in regard to the increasing number of negro lynchings occurring in the South, we must remember that many of the most atrocious public acts recorded in history have been committed by men who had convinced themselves that they were doing right. They either proceeded upon a false theory of conduct, or -- what is much worse -- they later invented a theory of conduct to cover and support their deeds.

One of these time-honored false theories has been that criminality can be suppressed and terrorized by exhibitions of brutal punishment; that crime can be prevented by cruelty.

Let us then assume that the Southern citizens who take part in and abet the lynching of negroes honestly believe that that is the only successful method of dealing with a certain class of crimes; that they have become convinced that the Southern negro in his present undeveloped state must be frightened and subdued by terror; that, acting upon this theory, they give each lynching full publicity and often gather together numerous spectators. We know that at least on one occasion excursion trains carried thousands of people to view a carefully planned lynching, in order that as many people as possible might be thoroughly frightened by the spectacle, and terrorized from committing the same crime. On this same assumption the living victim is sometimes horribly mutilated and his body is later exhibited.

Let us give the Southern citizens the full benefit of this position, and assume that they have set aside trial by jury and all processes of law because they have become convinced that this brutal method of theirs is the most efficient method in dealing with a peculiar class of crime committed by one race against another.

A most superficial study of history will discover that the method of deterring crime by horrible punishment has been tried many times and that it particularly distinguishes the dealing with those crimes which a so-called lower class has committed against its superior.

It betrays the existence of the essentially aristocratic attitude founded upon a contempt for the inferior class -- a belief that they cannot be appealed to by reason and fair dealing, but must be treated upon the animal plane, bullied and terrorized.

This attitude is particularly discernible when the lower class evinces a tendency toward democratic development, toward asserting their human claim as such, when they assert their rights rather than ask for privileges.

We recall that the years preceding the French Revolution were the years in [page 2] which the most revolting public executions were common in all parts of Paris. Fifty spots are still pointed out as the scenes of horrible public exposures. A man would be taken to one place, where his hand would be chopped off, then carried on a card to another where he would be broken alive on a wheel; and at still another his body would be burned, and his ashes scattered to the winds. So late as 1780 a workingman for stealing some linen was condemned to be hung on a gibbet and strangled by the public executioner; certainly not because of the value of the linen, but because he had dared to touch the property of the class above his own. He must be made an example of, his temerity must be well punished and a repetition prevented among his fellows. And who was responsible for this torture, strangling and burning? The old nobility and monarchists, who honestly believed that this method of terrorizing was the only possible way to control the common people, who were so far inferior to themselves that they could not be appealed to by humane methods.

It is thus the people were prepared for the guillotine, and it was only because they were hardened by such scenes as these that they could have endured the sights of the Revolution.

The English records of crime were never so full as when the penalties were most severe; when poaching -- that arch crime against the upper classes -- was punished by death; when the grinning skulls of thieves were exposed upon London Bridge; when, in short, the nobility made and executed the laws for the populace whose uprisings they feared.

It was because the gentle folk heard the rumblings of the Chartist movement that they were thus incensed and they went so far that they even succeeded in stirring up the law abiding country Englishman so that he went to burning hay ricks and attacking the houses of the country gentry in his desire to get even with the atrocities committed against him.

Punishments of this sort rise to unspeakable atrocities when the crimes of the so-called inferior class affect the property and persons of the superior; and when the situation is complicated by race animosity, as it is at present in the South, by the feeling of the former slave owner to his former slave, whom he is now bidden to regard as his fellow citizen, we have the worst possible situation for attempting this method of punishment. But, whether tried at its best or worst, this method has always failed, and -- more than that -- has reacted to the moral degradation of all concerned.

We would send this message to our fellow citizens of the South who are once more trying to suppress vice by violence: That the bestial in man, that which leads him to pillage and rape, can never be controlled by public cruelty and dramatic punishment, which too often cover fury and revenge. That violence is the most ineffectual method of dealing with crime, the most preposterous attempt to inculcate lessons of self control. A community has a right to protect itself from the criminal, to restrain him, to segregate him from the rest of society. But when it attempts revenge, when it persuades itself that exhibitions of cruelty result in reform, it shows itself ignorant of all the teachings of history; it allows itself to be thrown back into the savage state of dealing with criminality.

It further runs a certain risk of brutalizing each spectator, of shaking his belief in law and order, of sowing seed for future violence. It is certainly doubtful whether these scenes could be enacted over and over again, save in a community in which the hardening drama of slavery had once been seen, in which the devastation of war had taken place; and we may be reasonably sure that the next generation of the South cannot escape the result of the lawlessness and violence which are now being indulged in.

Brutality begets brutality; and proceeding on the theory that the negro is undeveloped, and therefore must be treated in this primitive fashion, is to forget that the immature pay little attention to statements, but quickly imitate what they see. The [under]-developed are never helped by such methods as these, for they learn only by imitation. The child who is managed by a system of bullying and terrorizing is almost sure to be the vicious and stupid child.

And to those Southern citizens who claim that this method has been successful, that in certain localities a lynching has, in point of fact, been followed by a cessation of the crime of which the [page 3] lynched man was guilty, we would quote the psychologist who tells us that, under the influence of certain strong emotions, such as fear, certain elements of the self can be prevented from coming into action, "inhibited," as they technically call it; but that these elements are thus only stupefied, or drugged, and sooner or later assert themselves with all of their old power, if the fuller self be aroused. All such inhibitive measures must in the end be futile, and, [although] they may for a fleeting moment appear successful, they are philosophically and historically unsound.

To those who say that most of these hideous and terrorizing acts have been committed in the name of chivalry, or in order to make the lives and honor of women safe, perhaps it is women themselves who can best reply that bloodshed and arson and ungoverned anger have never yet controlled lust. On the contrary, that lust has always been the handmaid of these, and is prone to be found where they exist; that the suppression of the bestial cannot be accomplished by the counter exhibition of the brutal only. Perhaps it is woman who can best testify that the honor of women is only secure in those nations and those localities where law and order and justice prevail; that the sight of human blood and the burning of human flesh has historically been the signal for lust; that an attempt to allay and control it by scenes such as those is as ignorant as it is futile and childish.

And if a woman might venture to add another word on behalf of her sex, that the woman who is protected by violence allows herself to be protected as the woman of the savage is, and she must still be regarded as the possession of man. As her lord and master is strong or weak, so is the protection which she receives; that if she takes brute force as her protection, she must also accept the status she held when brute force alone prevailed.

I have purposely treated this subject on the theory of its ablest defenders; I have said nothing of the innumerable chances of punishing the wrong man; of the many other results of lawless methods; I have avoided confusing the main issue.

Addams' argues that mob violence, and particularly lynching against African Americans in the South, erodes respect for the all among all groups and accomplishes nothing positive for any community that condones it.

This transcription includes only the final published version of the document. Any handwritten notes and strikethroughs have not been included in the transcription.