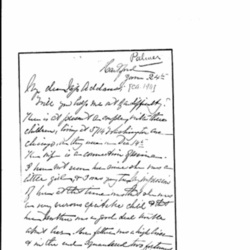 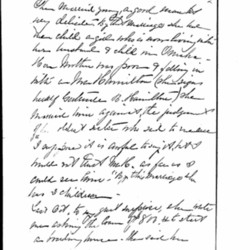 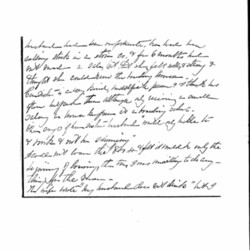 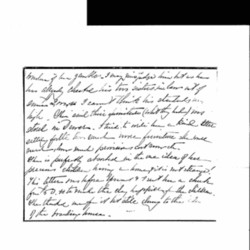 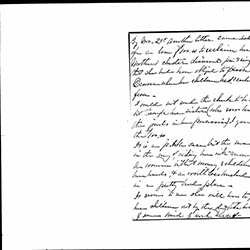 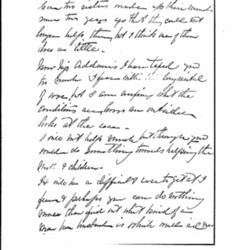 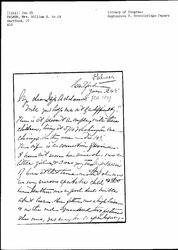 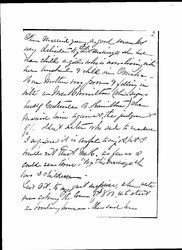 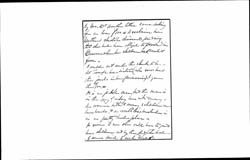 Will you help me out of a difficulty? There is at present a couple, with three children, living at 3714 Washington ave Chicago, or they were on Dec. 14th. The wife is a connection of mine. I have not seen her since she was a little girl, & I was young too. My impression of her at that time was that she was a very nervous excitable child & that her mother was a good deal trouble about her. Her father was a high liver & in the end squandered two fortunes. She was, you see, brought up in luxury. [page 2] She married young, a good man but very delicate. By that marriage she had [one] child a girl who is now living with her husband & child in Omaha. Her mother was poor & falling in with a Mr. Hamilton (she signs herself Gertrude B. Hamilton) she married him against the judgement of her oldest sister who said to me once "I suppose it is awful to say it, but I would not trust Mr H. as far as I could see him." By this marriage she has 3 children.

Last Oct. to my great surprise, she wrote me asking the loan of $800.xx to start a boarding house. She said her [page 3] husband had been unfortunate, he had been selling stock in a store co. & for 6 months had not made a sale, but that she fell well, & strong & thought she could run the boarding house.

Her sister is a very kind, unselfish person & I think has often helped them [although] only receiving a small salary as housekeeper at a boarding school.

She says if her sister's husband "would only buckle to & work & not be scheming."

I could not loan the $800.xx & felt it would be only the beginning of loaning, then [though] I was willing to do anything for the man.

The wife wrote "My husband does not drink" but I [page 4] wonder if [he] gambles. I may misjudge him but as he has already cheated his two sisters in law out of some $2,000.xx I cannot think his standards very high. [Ellen?] said their furniture (what they had) was stored in Denver. I tried to write her a kind letter setting forth how much more furniture she would need, how much provisions cost now etc.

She is perfectly absorbed in the one idea of her precious children having a home, & it is not strange! This letter was before Xmas & I sent her a check for $50.# to make the day happier for the children. She thanked me for it but still clung to the idea of the boarding house. [page 5]


By Nov. 29th another letter came asking for a loan of $100.# to reclaim her mother's cluster diamond pin & ring that she had been obliged to pawn in Denver when her children had scarlet fever.

I would not send the check to her but through her sister (who now has the jewels in her possession) I gave the $100.#.

It is a pitiable case but the man is in the way of aiding her with money. A woman without money, 3 children on her hands, & a worthless husband is in a pretty hard place.

It seems to me she will have to put her children [out] by the day & take hold of some kind of work herself. [page 6]

[Her] two sisters made up their minds some two years ago that they could not longer help them, but I think one of them does a little.

Now [Miss] Addams I have taxed you too much I fear with this long recital of woe, but I am anxious what the conditions are, how an outsider looks at the case.

I will not help much but through you would do something towards helping the mother & children.

It will be a difficult case to get at I fear & perhaps you can do nothing more than find out what kind of a man her husband is which would aid me. [page 7]

If you can look up the case it will greatly oblige

P.S. I was suffering greatly from pains in my right arm today & hope you will excuse my poor penmanship. I agree, and will edit that transcription, thanks David!

Palmer asks Addams to help her discover the true circumstances of an impoverished family member living in Chicago.

Pages were microfilmed out of order.