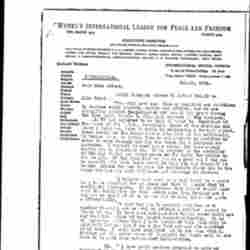 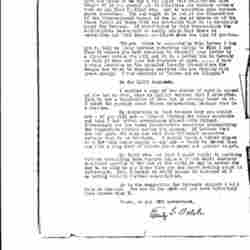 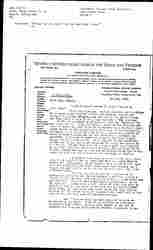 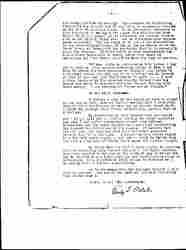 "You will have seen from my pamphlet and doubtless by various other reports, public and private, how we are struggling against [pan-Germanism] and how it has grown during the last year, thanks to financial support by big business."

"I. It has occurred to me that it would be important if the women of the W.I.L., especially those of the American and Neutral Sections, were to unite in addressing a fervent appeal, based solely on the humanitarian idea (not on the political), to German women to invite them to collaborate in pacifism in order to save Germany and lay the basis for a European renascence. I venture to send you a sketch for this appeal asking you to translate it. It is adapted to the mentality of Germany [today] and might serve as the basis for action by the League. If the idea strikes you as a good one I beg you to consult with Miss Balch about it that she may transmit it to Miss Addams for her to take the initiative since she is the woman who has the most influence and prestige in America.

"I believe that such an appeal would be a great help to us pacifist German women and that we should find it useful for propaganda. It is obvious that nobody should know that the initiation for this action came from Germany and I beg you to speak of it to no one but Miss Balch and quite confidentially.

"I also beg you to consult with her as to whether it might not be well to address a similar appeal to French women. In that case non-pacifist German women could not say that the action of the League lacks impartiality. It is to guarantee privacy that I have spoken of this plan only to Elizabeth Rotten whom I saw a few days ago and who approved of my idea. I would have consulted as to the plan with L. Heymann and the other women of (Munich?) but their mail is not sure to be safe from nationalist indiscretion.

"II. I have still another proposal to make as important as the last. Would it be possible to address a request to Miss Adams, through Miss Balch, to beg her to interest the Carnegie Institute to devote a large sum to [reinforcing] [page 2] pacifism in Germany? Our movement is [developing] throughout the country but its expansion is constantly blocked by the lack of material means. It is absolutely necessary to have the means to [illegible] buy a big paper (the militarists have bought 67 in two years) and to subsidize the various reviews such as DIE FRAU IM STAAT etc. and to subsidize also various peace societies. The sum ought to be put at the disposition of the international bureau of the League at Geneva or of the Peace Bureau at Berne with the provision that it is especially meant for Germany. If distributed by this intermediary the Nationalists here cannot so easily claim that there is corruption and that German pacifists are the dupe of America.

"If you write to acknowledge this letter I beg you to tell me your opinion referring simply to Plan I and Plan II unless you have occasion to transmit your letter by a discreet person who will put it in a letter box in Germany so that it does not pass the frontier by post. ... I have various lectures in the occupied Zone (in places) where the League has women to [organize] sections who are working with great energy. I was recently at Trèves and at Cologne."

I enclose a copy of her sketch of such an appeal as she has in mind, also an English version that I attempted. This is not a translation of hers but is closely based on it. I added the passage about French devastation; perhaps that is a mistake.

My impression is that to save time you should act -- if you will act -- without waiting for other countries and that I had better communicate direct with Holland, Switzerland and the three Scandinavian countries transmitting the suggestion without naming its source. If letters that are not quite the same are sent from different countries perhaps that is no drawback. I should think a letter signed by a few well known people -- say six -- would be better than one with a long list of little known names and quicker to get.

My first idea was that I could hardly do anything without consulting Lida Gustava Heymann (which Lilli Jannasch considers unsafe to do) but on the whole it may be better for her to be able to say later that she has heard nothing about it beforehand. Mrs. Swanwick is still immune to business so I am acting without further consultation.

As to the suggestion for Carnegie support I will make no comment. You are on the spot and you have infinitely more wisdom than I.

Yours, as you well understand, 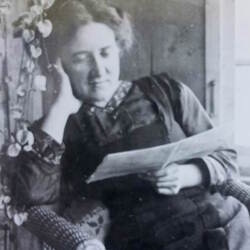 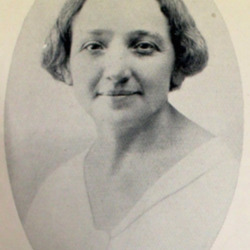 Balch sends Addams the text of Lili Jannasch's letter that describes the German women's struggle against Pan-Germanism and seeks help from WILPF.

Balch included the text of a February 10 letter from Lili Jannasch to Marguerite Gobat.