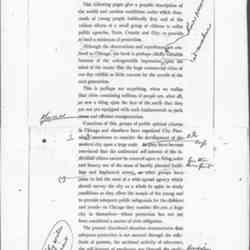 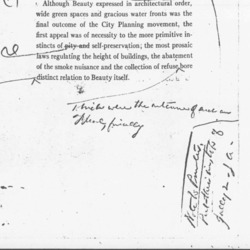 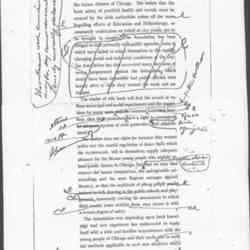 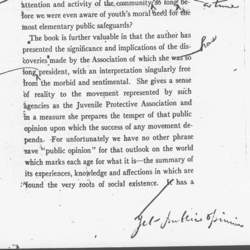 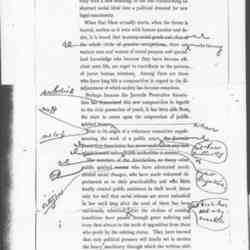 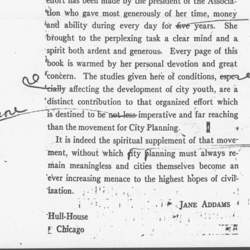 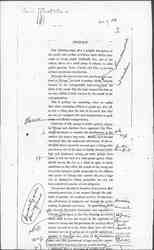 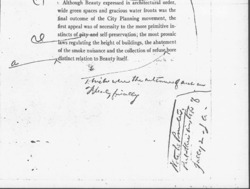 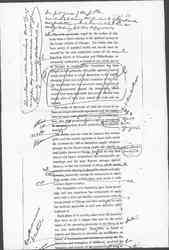 THE following pages give a graphic description of the sordid and careless conditions under which thousands of young people habitually live, and of the valiant efforts of a small group of citizens to enlist public agencies, State, County and City, to provide at least a minimum of protection.

Although the observations and experiences <here recorded> are confined to Chicago. The book is perhaps chiefly valuable because of the unforgettable impressions <it makes> upon the mind of the reader that the huge commercial cities of our day exhibit so little concern for the morale of the next generation.

This is perhaps not surprising, when we realize that cities containing millions of people are, after all, so new a thing upon the face of the earth that they are not yet equipped with such fundamentals as park zones <spaces> and efficient transportation.

Conscious of this, groups of public spirited citizens in Chicago and elsewhere have organized City Planning Committees to consider the development of the modern city upon a large scale. As <They> have become convinced that the undirected self-interest of the individual citizen cannot be counted upon to bring order and beauty out of the mass of hastily planned buildings and haphazard streets. <In the same spirit> so other groups have come to feel the need of a wide-spread agency which should survey the city as a whole in order to study conditions as they affect the morals of the young and to provide adequate public safeguards for the children and youth -- in Chicago they number 882,000, a huge city in themselves -- whose protection has not yet been considered a matter of civic obligation.

The present disordered situation demonstrates that adequate protection is not secured through the solicitude of parents, the sectional activity of educators, the self-interest of employers nor through the profit-seeking of pleasure purveyors. To meet these <consider moral> needs <from a city wide point of view> the Juvenile Protective Association was organized in Chicago. <Its prosaic beginnings are somewhat> analogous to the City Planning movement which while it does not consist in the regulation of tenement houses and the provisions for sanitary alleys cannot succeed in a city where these have not been obtained nor can it spring out of a public opinion unmindful of them. The first years of the <Juvenile Protective> Association dealt with that groundwork of legal and civic protection in which American cities are so sadly lacking.

Although Beauty expressed in architectural order, [page 2] wide green spaces and gracious water fronts was the final outcome of the City Planning movement, the first appeal was of necessity to the more primitive instincts of pity and self-preservation; the most prosaic laws regulating the height of buildings, the abatement of the smoke nuisance and the collection of refuse <which were the outcome of such an appeal, finally> bore <a> distinct relation to Beauty itself. [page 3]

<The first years of the J. P. A. were devoted to securing that groundwork of legal and civic protection in which American cities are so sadly lacking, but the safeguards> The civic protection urged by the author of this book bears a direct relation to the spiritual powers of the future citizens of Chicago. She insists that the basic safety of youthful health and morals must be secured by the civic authorities unless all the more beguiling efforts of Education and Philanthropy, so constantly undertaken on behalf of city youth, are to be brought to naught. <That however well-considered these efforts may be, they cannot succeed with young people already morally debauched.> The Association has been obliged to deal primarily with public agencies, some of which have failed to adapt themselves to the rapidly changing social and industrial conditions of the city; the Association has also uncovered many instances of wrong perpetrated against the [defenseless], which would have been impossible had public officials been keenly alive to their duty toward the weak and untrained.

The reader of this book will find the record of various municipal and social experiments and the suggestions for many more <others> <but the author> with the <by constantly insists> however, that <there> promoters <of all> have a right to presuppose an adequate system of civic protection, <such organizations> well administered.

The author <She> does not claim for instance that women police and the careful regulation of dance halls which she recommends will in themselves supply adequate pleasure for the 86,000 young people who nightly attend public dances in Chicago, but <she does contend> that we may thus remove the basest temptations, the unforgivable surroundings and the most flagrant outrages against decency, so that the multitudes of young people yearly trained to folk dancing in the public schools and playgrounds innocently craving the amusement to which their scanty years entitles them, may secure it with a certain degree of safety.

The Association ever depending upon fresh knowledge and new experience has endeavored to equip itself with a wide and familiar acquaintance with the young people of Chicago and their needs, and to work out methods applicable to each new situation which confronts it.

Each phase of its activity raises anew the question: How have we let it happen that care for the moral safety of the oncoming generation is the latest of all our civic undertakings? That <public> effort on behalf of schools and libraries to stimulate the intelligence, on behalf of vaccination and isolation to stamp out <health measures to control> the <diseases>infections and contagions of childhood, absorbed the attention and activity of the community <for> so long <a time> [page 4] before we were even aware of youth's moral need for the most elementary public safeguards?

The book is further valuable in that the author has presented the significance and implications of the discoveries made by the Association of which she was <has> so long <been> president, with an interpretation singularly free from the morbid and sentimental. She gives a sense of reality to the movement represented by such agencies as the Juvenile Protection Association and in a measure she prepares the temper of that public opinion upon which the success of any movement depends. For unfortunately we have no other phrase save "public opinion" for that outlook on the world which marks each age for what it is -- the summary of its experiences, knowledge and affections in which are found the very roots of social existence. It <Yet public opinion> has a [page 5] curious trick of suddenly regarding as a living moral issue, vital and unappeasable, some old situation concerning which society has been indifferent for many years. The newly moralized issue almost as if by accident, suddenly takes fire and sets whole communities in a blaze, lighting up human relationships and public duty with a new meaning, in the end transforming an abstract social ideal into a political demand for new legal enactments.

When that blaze actually starts, when the theme is heated, molten as it were with human passion and desire, it is found that in every social grade and class of the whole circle of genuine occupations, there are <many> mature men and women of moral purpose and specialized knowledge who because they have become efficient unto life, are eager to contribute to the pattern of juster human relations. Among them are those who have long felt a compunction in regard to the ill-adjustment of which society has become conscious.

Perhaps because the Juvenile Protection Association has dramatized <embodied> this new compunction in regard to the civic protection of youth, it has been able from the start to count upon the cooperation of public spirited women, <when,> true to its origin of a voluntary committee supplementing the work of a public court, the Juvenile Protective Association has never undertaken any task which it could <it has continually induced> public authorities to assume <new obligations.>

The members of the Association, as many other Public spirited women <citizens> who have advocated sorely needed social changes, who have made volunteer experiments as to their practicability and who have finally created public sentiment in their favor, know only too well that social reforms are never embodied in law until long after the need of them has been universally admitted; <that such laws are only enacted>; after the victims of existing conditions have passed through great suffering and even then always in the teeth of opposition from those who profit by the existing status. They have learned that only political pressure will finally set in motion the heavy machinery through which the written statute may be changed.

The Association therefore welcomed as a reinforcement to all of its aims the vote of a quarter million women, so newly enfranchised <granted> in Chicago, confident that the women's vote would hasten the day when just dealing and "the issue of things" should go together.

The following record of a finely sustained social effort has been made by the president of the Association who gave most generously of her time, money [page 6] and ability during every day for five <seven> years. She brought to the perplexing task a clear mind and a spirit both ardent and generous. Every page of this book is warmed by her personal devotion and great concern. The studies given here of conditions, especially affecting the development of city youth, are a distinct contribution to that organized effort which is destined to be not less <more> imperative and far reaching than the movement for City Planning. Addams's galley proof for the preface to Safeguards for City Youth at Work and at Play, praising the book and explaining why it should be consulted concerning matters of child welfare.

A note on the bottom of page 2 by Addams reads: Note to Printer put this in top of galley 2. J A.
Addams' markup, correcting capitalization, adding punctuation, and joining sentences has been silently inserted.