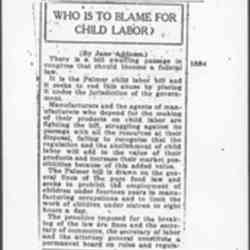 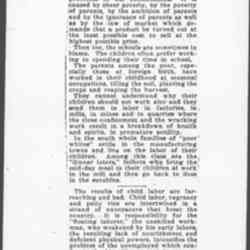 WHO IS TO BLAME FOR CHILD LABOR?
(By Jane Addams.)

There is a bill awaiting passage in congress that should become a federal law.

It is the Palmer child labor bill and it seeks to end this abuse by placing it under the jurisdiction of the government.

Manufacturers and the agents of manufacturers who depend for the making of their products on child labor are fighting the bill, struggling against its passage with all the resources at their disposal, failing to recognize that the regulation and the abolishment of child labor will add to the value of their products and increase their market possibilities because of this added value.

The Palmer bill is drawn on the general lines of the pure food law and seeks to prohibit the employment of children under fourteen years in manufacturing occupations and to limit the work of children under sixteen to eight hours a day.

The penalties imposed for the breaking of the law are fines and the secretary of commerce, the secretary of labor and the attorney general constitute a permanent board on rules and regulations [image Jane Addams.] and the secretary of labor is authorized to inspect and prosecute for violations. The law also provides that state factory inspectors, truant officers "or any other person" may bring complaints before the United States district attorneys and every separate shipment is made to constitute a separate offense.

There is nothing new in the body of the proposed law except that is puts child labor under the jurisdiction of the federal government.

Child labor presents an economic problem that is intertwined with the other problems of our communities. It is caused by sheer poverty, by the poverty of parents, by the ambition of parents and by the ignorance of parents as well as by the law of market which demands that a product be turned out at the least possible cost to sell at the highest possible price.

Then too, the schools are sometimes to blame. The children often prefer working to spending their time in school.

The parents among the poor, especially those of foreign birth, have worked in their childhood at seasonal occupations, tilling the soil, planting the crops and reaping the harvest.

They cannot understand why their children should not work also and they send them to labor in factories, in mills, in mines and in quarries where the close confinement and the wracking work result in a breakdown of health and spirits, in premature senility.

In the south whole families of "poor whites" settle in the manufacturing towns and live on the labor of their children. Among this class are the "dinner toters," fathers who bring the mid-day meal to their children at work in the mill and then go back to doze in the sunshine.

The results of child labor are far-reaching and bad. Child labor, vagrancy and petty vice are intertwined in a strand of annoyances that beset the country. It is responsibility for the "floating laborer," the unskilled workman, who weakened by his early labors, the resulting lack of nourishment and deficient physical powers, intensifies the problem of the unemployed which confronts the big cities at certain seasons.

It is bad for parents to live on the earnings of their children. It produces an unnatural relation. It makes the child independent of parental authority and liable to acts of lawlessness and ignorance that only parental authority can prevent.

The industrial wealth of a country, its human timber, is lessened in quality by the laboring of children who should be building up their bodies and minds in schools, in playgrounds and in the home. It is bad for the manufacturers who exploit children and child labor. The products of these factories are the poorest in quality and only by the abolishment of child labor will they be rendered better and more salable in the market.

And child labor weakens the citizen. It robs him of his vitality, it weakens his children, it increases the population of public institutions and it puts this added weight and expense on the community to bear. 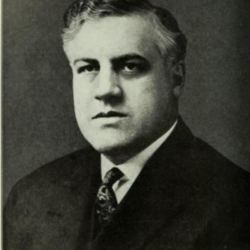 Addams, discussing the main reasons for why child labor is wrong, how it came to be, and who can be blamed for it.