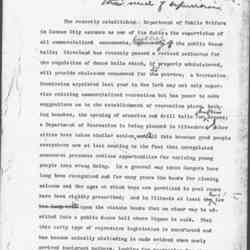 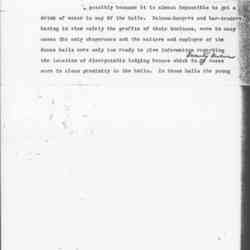 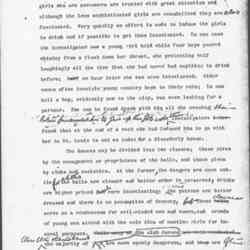 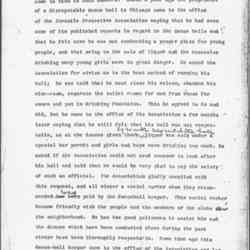 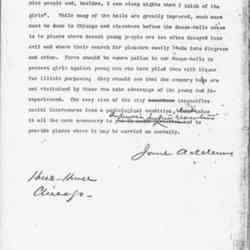 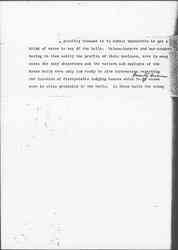 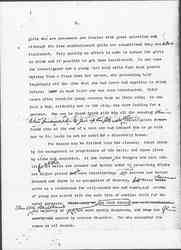 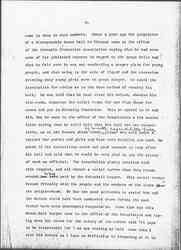 The recently established Department of Public Welfare in Kansas City assumes as one of its duties the supervision of all commercialized amusements, especially <including> of the public dance halls; Cleveland has recently passed a revised ordinance for the regulation of dance halls which, if properly administered, will provide wholesome amusement for the <its> patrons; a Recreation Commission appointed last year in New York may not only supervise existing commercialized recreation but has power to make suggestions as to the establishment of recreation piers, bathing beaches, the opening of armories and drill halls for <public> dances; a Department of Recreation is being planned in Milwaukee <and> other cities have taken similar action. and All this because good people everywhere are at last awaking to the fact that unregulated amusement presents endless opportunities for enticing young people into wrong doing. In a general way these dangers have long been recognized and for many years the hours for closing saloons and the ages at which boys are permitted in pool rooms have been rigidly prescribed; and in Illinois at least the <a state> law has long been <is> upon the statue books that no minor may be admitted into a public dance hall where liquor is sold. That this early type of repressive legislation is unenforced and has become actually misleading is made evident when newly arrived immigrant mothers, looking for recreation for their children, assume that licensed dance halls, opened under city regulation and protected by city policemen, are safe places. Many of these mothers find to their sorrow that the majority [page 2 may be missing]

[torn page] possibly because it is almost impossible to get a drink of water in any of the halls. Saloon-keepers and bar-tenders, having in view solely the profits of their business, were in many cases the only chaperones and the waiters and [employees] of the dance halls were only too ready to give information regarding the location of disreputable lodging houses which in 77 <seventy seven] cases were in close proximity to the halls. In these halls the young [Page 3] girls who are newcomers are treated with great attention and although the less sophisticated girls are scandalized they are <also> fascinated. Very quickly an effort is made to induce the girls to drink and if possible toget them intoxicated. In one case the investigator saw a young girl held while four boys poured whiskey from a flask down her throat, she protesting half laughingly all the time that she had never had anything to drink before; half an hour later she was seen intoxicated. Older women often inveigle young country boys to their ruin; in one hall a boy, evidently new to the city, was seen looking for a partner. The one he found drank with him all the evening, <she later persuaded him to give up his [illegible words].> The  investigators found that at the end of a week she had induced him to go with her to St. Louis to act as cadet for a disorderly house.

The dances may be divided by two classes; those given by the management or proprietors of the halls, and those given by clubs and societies. At the former, the dangers are more subtle <for [although]> the halls are cleaner and better order is preserved; drinks are higher priced but <and> more intoxicated; <[although]> the patrons are better dressed and there is an assumption of decency, but these halls <dances> serve as a rendezvous for evil-minded men and women, and crowds of young men attend with the sole idea of meeting girls for immoral purposes. While many of the club dances are well-conducted <On the other hand> the majority of <the club dances> are more openly dangerous, and they are <often> nearly all marked by extreme disorder. The men outnumber the women at all dances. [pages 4-5 missing]

[page 6] come to them in such numbers. About a year ago the proprietor of a disreputable dance hall in Chicago came to the office of the Juvenile Protective Association saying that he had seen some of its published reports in regard to the dance halls and that he felt sure he was not conducting a proper place for young people, and that owing to the sale of liquor and the excessive drinking many young girls were in great danger. He asked the Association for advice as to the best method of running his hall; he was told that he must close his saloon, abandon his wine-room, separate the toilet rooms for men from those for women and put in drinking fountains. This he agreed to do and did, but he came to the office of the Association a few months later saying that he still felt that his hall was not respectable, as at the dances given there, <by workers who rented the hall> liquor was sold under a special bar permit and girls and boys were drinking too much. He asked if the Association could not send someone to look after his hall and said that he would be very glad to pay the salary of such an official. The Association gladly complied with this request, and all winter a social worker whom they recommended has been <was> paid by the dancehall keeper. This social worker became friendly with the people and the members of the clubs of <in> the neighborhood. He has two good policemen to assist him and the dances which have been conducted there during the past winter have been thoroughly respectable. Some time ago this dance-hall keeper came to the office of the Association and laying down his check for the salary of the worker said "It pays to be respectable for I am now renting my hall more than I ever did before as I have no difficulty in disposing of it to [page 7] nice people and, besides, I can sleep nights when I think of the girls". While many of the halls are greatly improved, much more must be done in Chicago and elsewhere before the dance-halls cease to be places where decent young people are too often decoyed into evil and when their search for pleasure easily leads into disgrace and crime. There should be women police in our dance-halls to protect girls against young men who have plied them with liquor for illicit purposes; they should see that the country boys are not victimized by those who take advantage of the young and inexperienced. The very size of the city sometimes intensifies social intercourse into a pathological condition, <which> makes it all the more necessary to put it under direction <supervise public recreation> and to provide places where it may be carried on normally. 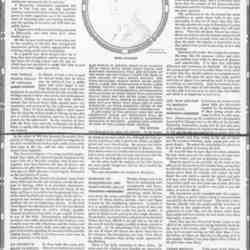 Addams argues for the regulation of public recreation to provide safe venues for women, youth, and communities.