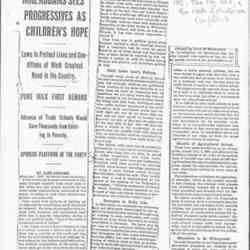 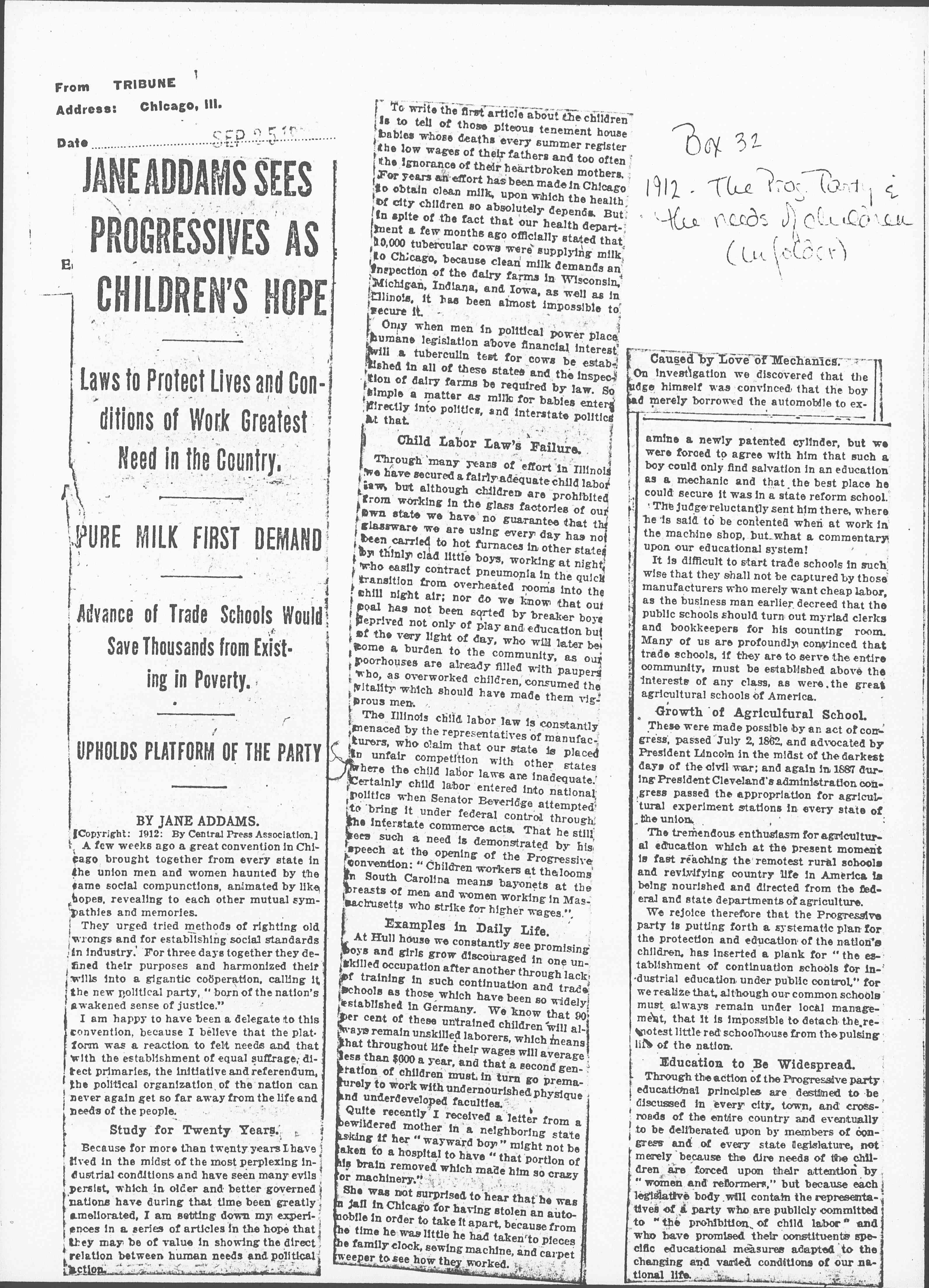 Laws to Protect Lives and Conditions
of Work Greatest Need in the Country.

Advance of Trade Schools Would
Save Thousands from Existing
in Poverty.

UPHOLDS PLATFORM OF THE PARTY

A few weeks ago a great convention in Chicago brought together from every state in the union men and women haunted by the same social compunctions, animated by like hopes, revealing to each other mutual sympathies and memories.

They urged tried methods of righting old wrongs and for establishing social standards in industry. For three days together they defined their purposes and harmonized their wills into a gigantic [cooperation], calling it the new political party, "born of the nation's awakened sense of justice."

I am happy to have been a delegate to this convention, because I believe that the platform was a reaction to felt needs and that with the establishment of equal suffrage, direct primaries, the initiative and referendum, the political organization of the nation can never again get so far away from the life and needs of the people.

Because for more than twenty years I have lived in the midst of the most perplexing industrial conditions and have seen many evils persist, which in older and better governed nations have during that time been greatly ameliorated, I am setting down my experiences in a series of articles in the hope that they may be of value in showing the direct relation between human needs and political action.

To write the first article about the children is to tell of those piteous tenement house babies whose deaths every summer register the low wages of their fathers and too often the ignorance of their heartbroken mothers. For years an effort has been made in Chicago to obtain clean milk, upon which the health of city children so absolutely depends. But in spite of the fact that our health department a few months ago officially stated that 10,000 tubercular cows were supplying milk to Chicago, because clean milk demands an inspection of the dairy farms in Wisconsin, Michigan, Indiana, and Iowa, as well as in Illinois, it has been almost impossible to secure it.

Only when men in political power place humane legislation above financial interest will a tuberculin test for cows be established in all of these states and the inspection of dairy farms be required by law. So simple matter as milk for babies enters directly into politics, and interstate politics at that.

Through many years of effort in Illinois we have secured a fairly adequate child labor law, but although children are prohibited from working in the glass factories of our own state we have no guarantee that the glassware we are using every day has not been carried to hot furnaces in other states by thinly clad little boys, working at night, who easily contract pneumonia in the quick transition from overheated rooms into the chill night air; nor do we known that our coal has not been sorted by breaker boys deprived not only of play and education but of the very light of day, who will later become a burden to the community, as our poorhouses are already filled with paupers who, as overworked children, consumed the vitality which should have made them vigorous men.

The Illinois child labor law is constantly menaced by the representatives of manufacturers, who claim that our state is placed in unfair competition with other states where the child labor laws are inadequate. Certainly child labor entered into national politics when Senator Beveridge attempted to bring it under federal court through the interstate commerce acts. That he still sees such a need is demonstrated by his speech at the opening of the Progressive convention: "Children workers at the looms in South Carolina means bayonets at the breasts of men and women working in Massachusetts who strike for higher wages."

At Hull houses we constantly see promising boys and girls grow discouraged in one unskilled occupation after another through lack of training in such continuation and trade schools as those which have been so widely established in Germany. We know that 90 per cent of these untrained children will always remain unskilled laborers, which means that throughout life their wages will average less than $600 a year, and that a second generation of children must in turn go prematurely to work with undernourished physique and underdeveloped faculties.

Quite recently I received a letter from a bewildered mother in a neighboring state asking if her "wayward boy" might not be taken to a hospital to have "that portion of his brain removed which made him so crazy for machinery."

She was not surprised to hear that he was in jail in Chicago for having stolen an autmobile in order to take it apart, because from the time he was little he had taken to pieces the family clock, sewing machine, and carpet sweeper to see how they worked.

Caused by Love of Mechanics.

On investigation we discovered that the judge himself was convinced that the boy had merely borrowed the automobile to examine a newly patented cylinder, but we were forced to agree with him that such a boy could only find salvation in an education as a mechanic and that the best place he could secure it was in a state reform school.

The judge reluctantly sent him there, where he is said to be contented when at work in the machine shop, but what a commentary upon our educational system!

It is difficult to start trade schools in such wise that they shall not be captured by those manufacturers who merely want cheap labor, as the business an earlier decreed that the public schools should turn out myriad clerks and bookkeepers for his counting room. Many of us are profoundly convinced that trade schools, if they are to serve the entire community, must be established above the interests of any class, as were the great agricultural schools of America.

These were made possible by an act of congress, passed July 2, 1862, and advocated by President Lincoln in the midst of the darkest days of the civil war; and again in 1887 during President Cleveland's administration congress passed the appropriation for agricultural experiment stations in every state of the union.

The tremendous enthusiasm for agrocultural education which at the present moment is fast reaching the remotest rural schools and revivifying country life in America is being nourished and directed from the federal and state departments of agriculture.

We rejoice therefore that the Progressive party is putting forth a systematic plan for the protection and education of the nation's children, has inserted a plank for "the establishment of continuation schools for industrial education under public control," for we realize that, although our common schools must always remain under local management, that it is impossible to detach the remotest little red schoolhouse from the pulsing life of the nation.

Education to Be Widespread.

Through the action of the Progressive party educational principles are destined to be discussed in every city, town, and crossroads of the entire country and eventually  to be deliberated upon by members of congress and of every state legislature, not merely because the dire needs of the children are forced upon their attention by "women and reformers," but because each legislative body will contain the representatives of a party who are publicly committed to "the prohibition of child labor" and who have promised their constituents specific educational measures adapted to the changing and varied conditions of our national life. 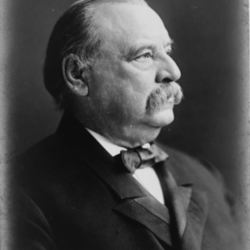 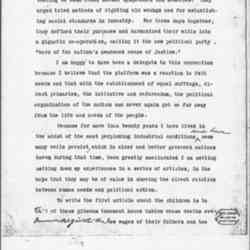