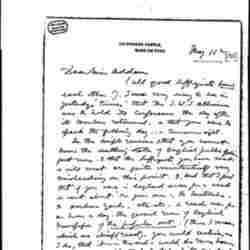 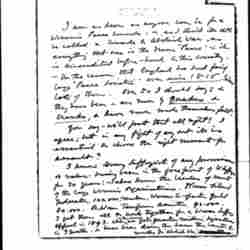 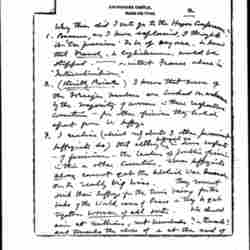 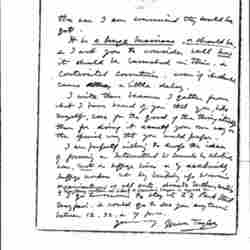 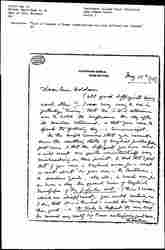 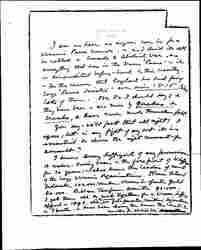 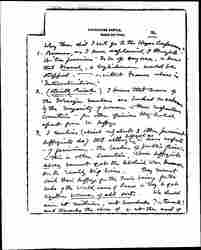 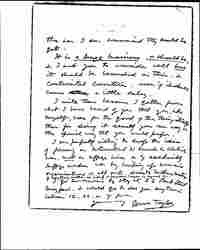 (all good suffragists know each other!). I was very sorry to see in yesterday's "Times" that the I.W.S. Alliance was to hold its conference the day after its members returned, & that you were to speak the following day, i.e. tomorrow night.

For the simple reasons, 1. that you cannot know the seething state of English public opinion just now, 2. that the suffragists you have met & will meet are quite unintentionally very misleading on this point, 3. and that I feel that if you were in England even for a week & went about "on your own", to factories, to dockers yards, etc. etc. & read over for an hour a day, the general run of English newspaper of the popular sort: (those I mean which are chiefly read), you would [realize], as I do, that it -- in the end -- would do more harm than good, i.e. it tends to defeat its own end, to launch any really big Peace [enterprise] just now, in Britain. [page 2]

I am as keen as anyone can be for a Woman's Peace Crusade, or as I think it shld be called a Crusade to Abolish War, as everything that has in the name "Peace" -- it is discredited before-hand in this country --for the reason that England has had fairly large "Peace Societies" ever since 1816! & has lots of them. Over 50 I should say; & they have been & are run by Quakers & cranks, & have never made themselves felt.

You say -- we'll put that all right! I agree; but in any fight of any sort it is essential to choose the right moment for assault.

I know every suffragist of any persuasion or value, having been in the fore front of W Suffrage for 30 years: -- I also know the leaders of most of the large women's [organizations]. Women's Liberal Federation 100,000. members, Women's Co-operative Guild 80,000. B. Women's Temperance Association 90,000. I got them all to work together for a Woman Suffrage appeal in 1893. When <by this means> we got <a> quarter million signatures in 3 months. I have been doing the same the last 2 months for "abolish war." [illegible] [page 3]

Why then did I not go to The Hague Conference?

1. Because, as I have explained, I thought it "too precious" to be of any use. I knew that French, & Englishmen, would be stopped. -- & without France where is "Internationalism."

2. (strictly Private) I knew that some of the Foreign members are looked on askance by the majority of women in their respective countries -- for other opinions they hold apart from W. Suffrage.

3. I [realize] (which only about 3 other prominent suffragists do) that although <suffragists are> in some respects -- of feminism -- the leaders of public opinion in this & other countries, Woman Suffragists alone cannot get the Abolish War Crusade on to really big lines. They must sink their suffrage for the time being for the sake of the world cause of Peace & try to get together women of all sorts. We should aim at millions, not hundreds (or thousands) and towards the close of & at the end of [page 4] the war I am convinced they could be got.

It is a huge business, or should be, & I ask you to consider well how it should be launched in this, & continental countries, even if it should cause [illegible] a little delay.

I write this because I gather from what I have heard of you that you, like myself, care for the good of the thing itself than for doing it exactly your own way or the special way that you would prefer.

I am perfectly willing to drop the idea of forming an International W Crusade to abolish war, not on suffrage lines or by exclusively suffrage workers but by linking up women's [organizations] of all sorts, down to Mothers meetings <if anything better or likely to become larger is agreed on.> 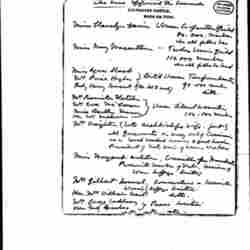 List of Leaders of Women Organizations who have affirmed the Crusade, May 11, 1915

Taylor explains the relationship among the British women's organizations and the reasons that she did not attend the conference at The Hague.