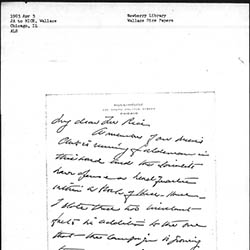 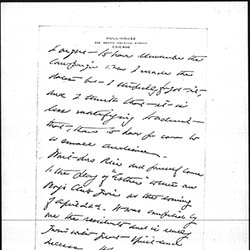 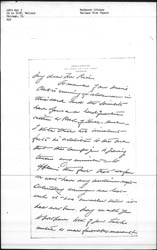 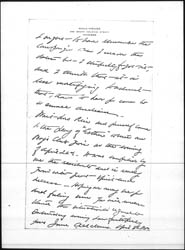 A member of our men's club is running for alderman in this ward and the Socialists have opened a headquarters within a block of Hull-House. I state these two irrelevant facts in addition to the one that the campaign is growing tenser every minute -- to explain the fact that we fear we won't have any audience next Saturday evening -- even last week it was smaller than it has ever been. May we ask you to postpone both of your talks until a more favorable moment? [page 2] I ought to have remembered the campaign when I made the dates but I stupidly forgot it, and I think that it is less mortifying to admit that, than to have you come to a small audience.

Won't Mrs Rice and yourself come to the play of "Esther" which an Boy's Club gives on the evening of April 22d. It was compiled by one the residents and is really given with great spirit and success. Hoping we may see you and feeling sure you will understand the situation in regard to Saturday evening I am faithfully yours Jane Addams.

Addams wants to reschedule Rice's talks at Hull-House because a Socialist candidate for alderman has opened a headquarters nearby and attendance has been poor.