Comments at the Roadside Settlement, February 28, 1905 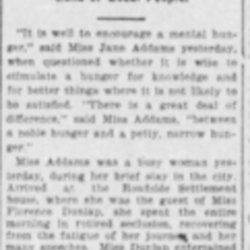 THINKS EACH CLUB WOMAN SHOULD AID ONE CHILD.

"It is well to encourage a mental hunger," said Miss Jane Addams yesterday, when questioned whether it is wise to stimulate a hunger for knowledge and for better things where it is not likely to be satisfied. "There is a great deal of difference, " said Miss Addams, "between a noble hunger and a petty, narrow hunger."

Miss Addams was a busy woman yesterday, during her brief stay in the city. Arrived at the Roadside Settlement house, where she was the guest of Miss Florence Dunlap, she spent the entire morning in retired seclusion, recovering from the fatigue of her journey and her many speeches. Miss Dunlap entertained for her at luncheon, and in the afternoon Miss Addams addressed a large assembly of club women of the city, who had been invited there by the ladies of the Roadside Settlement board to meet Miss Addams. Miss Addams gave a short address on social questions, and following this, any member of her audience was privileged to ask questions. Many and complex were the problems propounded to Miss Addams for solution.

"We have a woman's club at the settlement," said Miss Addams, "of 400 members. It was organized by a society woman of Chicago, who gave $25,000 for the purpose. This woman took up this work because she said she was tired of meeting the same women she met every day at her round of social pleasures. The women of the settlement did not know that she was a wealthy woman, as she came and went as one of them. She was twice chosen president of the club. Women's clubs are a great aid in the settlement work."

Miss Addams is a great believer in the juvenile courts, and suggested that much good might be accomplished by club women interesting themselves in the personal welfare of some particular child. Miss Addams was entertained at a 6 and Trade Unionism."

Addams made remarks during a visit to a Des Moines settlement about the role that women's clubs play in social work.