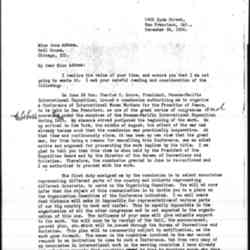 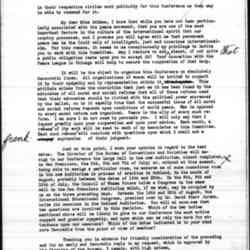 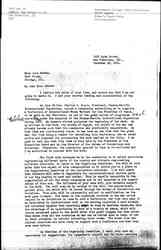 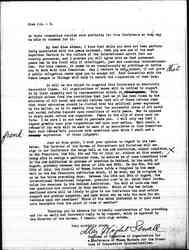 I realize the value of your time, and assure you that I am not going to waste it. I ask your careful reading and consideration of the following:

On June 24 Hon. Charles C. Moore, President, Panama-Pacific International Exposition, issued a commission authorizing me to organize a Conference of International Women Workers for the Promotion of Peace, to be held in San Francisco, as one of the great series of congresses <and to be held> [convening] under the auspices of the Panama-Pacific International Exposition during 1915. My absence abroad postponed the beginning of the work. On my arrival in New York, the middle of August, the effect of the war had already become such that the commission was practically inoperative. At that time and continuously since, it has been my own view that the great war, far from being a reason for cancelling this Conference, was an added motive and argument for prosecuting the work implied by its title. I am glad to tell you that this view is also held by the President of the Exposition Board and by the Director of the Bureau of Conventions and Societies. Therefore, the commission granted in June is re-confirmed and I am authorized to proceed with the work.

The first duty assigned me by the commission is to select associates representing different parts of the country and hitherto representing different interests, to serve on the Organizing Committee. You will at once infer that the object of this communication is to invite you to a place on the Organization Committee of the Conference indicated. I am well aware that distance will make it impossible for representatives of various parts of our big country to meet and confer. This is equally impossible in the organization of all the other congresses and is not expected in the organization of this one. The influence of your name will give valuable support to the work. You will soon be in receipt of the Call, the announcement, general plan, etc. which will be issued through the Bureau of Conventions and Societies. This plan will be necessarily subject to modification, as the work goes forward. The women in the countries involved in the war cannot respond to an invitation to come to such a Conference, but from very many of my associates in international work in the warring countries I have already had voluntary appeals that something might be done by American women, who have the advantage of an opportunity to work in a country at peace, which will insure permanent peace to the world after this great tragedy has been ended. Some women from all the countries at war can be relied upon to help, if not by their presence, by letters indicating their views. The women from the neutral countries are more ready to support such a Conference now than they ever were before.

As Chairman of the Organizing Committee, I shall rely upon my associates for suggestions, for sympathetic support and for their securing [page 2] in their respective circles such publicity for this Conference as they may be able to command for it.

My dear Miss Addams, I know that while you have not been particularly associated with the peace movement, that you are one of the most important factors in the culture of the international spirit that our country possesses, and I presume you will agree with me that permanent peace can be the fruit only of intelligent, just and conscious internationalism. For this reason, it seems to me conspicuously my privilege to invite you to work with this Committee. May I venture to add <that> almost, if not quite a public obligation rests upon you to accept it? Your connection with the Peace League in Chicago will help to secure the cooperation of that body.

It will be the object to organize this Conference on absolutely democratic lines. All organizations of women will be invited to support it by their sympathy and by representation within it. of delegates. This attitude arises from the conviction that just as it has been found by the advocates of all moral and social reforms that all of these reforms need that their advocates should be clothed with the political power expressed by the ballot, so is it equally true that the successful issue of all moral and social reforms depend upon conditions of world peace. War is opposed to every moral reform now organized. Peace is the ally of every such reform. I am sure I do not need to persuade you. I will only say that I depend greatly upon your cooperation and upon your advice. Each month, a résumé of its work will be [sent] to each of my associates on this Committee. Each such résumé will conclude with questions upon which I shall ask a strong <frank> expression of their judgment.

Just at this point, I wish your opinion in regard to the best dates. The Director of the Bureau of Conventions and Societies will assign to our Conference the large hall in the new Auditorium, almost completed, in San Francisco, the 5th, 6th and 7th of July; or, without at this moment, being able to assign a particular room, he assures me of some commodious room in the new Auditorium in process of erection in Oakland, in the month of August, probably between the dates of 16th and 28th. On the 8th, 9th and 10th of July, the Council of Women Voters holds a Congress in the same hall in the San Francisco Auditorium which, if we wish, may be occupied by us on the three preceding days. Between the 16th and 28th of August, the International Education Congress, presided over by Dr. David Starr Jordan, holds its sessions in the Oakland Auditorium. You will at once-see that two questions are involved in this decision. Which of the two bodies mentioned above will be likely to give to our Conference the most active support and greater sympathy, and upon which can we rely the more for attendance upon our sessions? Which of the dates indicated is to your mind more favorable from the point of view of weather?

Thanking you in advance for friendly consideration of the preceding and for an early and favorable reply to my request, which is approved by the Director of the Bureau, I remain, with high esteem,

Chairman of Committee of Organization for a Conference of Women Workers for the Promotion of Cooperative Internationalism. 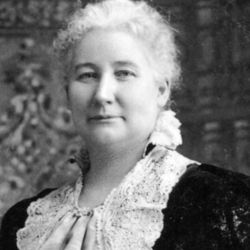 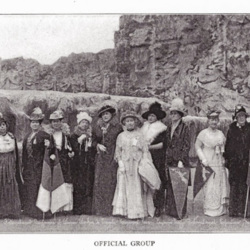 Sewall asks Addams to join the Conference of International Women Workers for the Promotion of Peace, providing details on the group's aims.