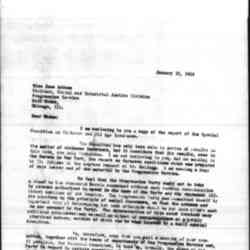 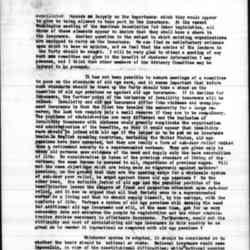 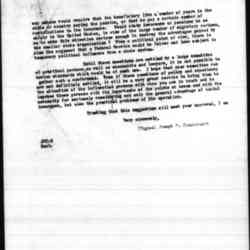 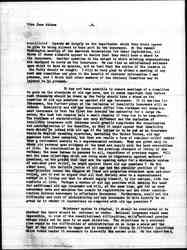 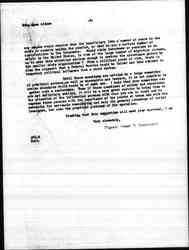 I am enclosing to you a copy of the report of the Special Committee on Sickness and Old Age Insurance.

The Committee has only been able to arrive at results in the matter of sickness insurance, but it considers that its results, even in this case, are only tentative. I am not enclosing to you, but am sending to the Bureau in New York, the report on European conditions which was prepared by Dr. Rubinow at the express request of Mr. Kellogg. I am sending a copy of this letter and of the material to the Progressive Service.

We feel that the Progressive Party ought not to take a stand on the standard herein contained without very careful consideration by persons authorized to speak in the name of the Party and who represent different sections of the country. The Progressive Party has committed itself by its platform to the principle of social insurance, so that the arduous and important duty of determining how that principle shall be put into effect must be now assumed by the Party. The determination of this point involves many political considerations as well as a host of considerations of a purely practical nature; neither of which can be even touched by a small special committee.

We, therefore, urge that you call a meeting of your committee, together with the heads of departments of the Progressive Service and, if possible, the National Committees, to take up, broadly, the stand of the Party in regard to certain questions of policy and practicability. One of these questions is whether the carrier of sickness insurance shall be the state or shall be local organizations modeled on the German plan with the state control, and if either system be adopted as the normal, whether and to what extent establishment funds shall be allowed to operate, and whether fraternities or labor unions, or small scattered funds, as now existing, shall be permitted to assume part of the insurance. Both the main question and the subsidiary point of the extent of free insurance require a knowledge of the probable line of least resistance, or, perhaps more properly, of the strength of the resistance to one plan or the other and the necessity for the conciliation of fraternities, insurance companies and unions. Whether they can be [page 2] conciliated depends [illegible] largely on the importance which they would appear to give to being allowed to take part in the insurance. At the recent Washington meeting of the American Association for Labor Legislation, all three of these elements appear to desire that they shall have a share in the insurance. Another question is the extent to which existing organizations are equipped to carry on the insurance. We can find no satisfactory evidence upon which to base an opinion, and we feel that the advice of the leaders in the Party should be sought. I will be very glad to attend a meeting of any such [illegible] committee and give it the benefit of whatever information I may possess, and I think that other members of the Advisory Committee may be induced to be present.

It has not been possible to secure meetings of a committee to pass on the standards of old age care, and it seems important that before such standards should be drawn up the Party should take a stand on the question of old age pensions as against old age insurance. If it decides for insurance, the further point of the inclusion of invalidity insurance will be raised. Invalidity and old age insurance differ from sickness and unemployment insurance in that the first two involve the necessity for a large reserve; the last two require only a small reserve if they are to be compulsory. The problems of administration are very different and the inclusion of invalidity insurance with sickness would greatly complicate the organization and administration of the benefits, so that it would appear that invalidity care should be joined with old age if the latter is to be put on an insurance basis. In English speaking countries, including the United States, old age pensions have been accepted, but they are really a form of out-door relief rather than a retirement annuity to a superannuated workman. They are given only to needy old persons upon evidence of the need and supply only the bare necessities of life. No consideration is taken of the previous standard of living of the workman; the same income is assured to all, regardless of previous wages. Will not the same objections which are being made so vigorously against mothers' pensions, on the ground that they are the opening wedge for a wholesale system of out-door poor relief, be urged against these old age pensions? On the other hand, the definite factor of old age and the peculiar position of the beneficiaries lessen the dangers of fraud and pauperism attendant upon out-door relief, and it can be argued that all that Society owes to a superannuated worker is a living and that he should supply himself, by his savings, with the comforts of life. Perhaps a system of old age pensions will develop the need for additional old age insurance and will, at the same time, get for us very necessary data and accustom the people to registration and the other administrative devices necessary to effectuate insurance. Furthermore, would not the difficulty and cost of administering old age insurance in this country be so great as to render it impractical as compared with old age pensions?

Whichever system is adopted, it should be considered as to whether the basis should be national or state. National insurance would seem impossible, in view of the constitutional difficulties; while <a> national pension scheme would not be open to as much objection. The objections to a national plan would be the difficulties of administration on so large a scale and the fact of the difference in wages and in standard of living in different localities which would render it necessary to diversify the amount paid. On the other hand, [page 3] any scheme would require that the beneficiary live a number of years in the state or country paying the pension, or that he pay a certain number of contributions to the insurance. Would state insurance or pensions be so unfair in the United States, in view of the large number of migratory workmen, as to make this objection serious enough to destroy the advantages gained by the smaller state organization? From a political point of view, there is also the argument that a Federal Service would be fairer and less subject to temporary political influence than a state system.

Until these questions are settled by a large committee of practical persons, as well as economists and lawyers, it is not possible to devise standards which would be of much use. I hope that your committee can gather such a conference. Even if these questions of policy and expediency are not definitely settled, it will be a very great service to bring them to the attention of the influential persons with whom you are in touch and to impress those persons with the importance of the points at issue and with the necessity for seriously considering not only the general advantage of social insurance, but also the practical problems of its operation.

Trusting that this suggestion will meet your approval, I am 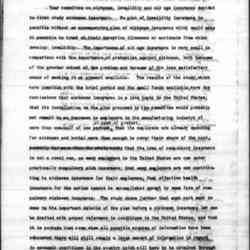 Chamberlain tells Addams he feels that the Progressive Party should not yet take a firm stance on sickness insurance.