Lecture to the University of Chicago, August 1, 1903 (excerpt) 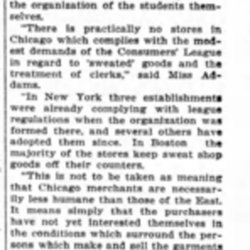 Campaign to Enforce Recognition of the Demands of the Consumers' League

Miss Jane Addams is pronounced in her condemnation of the economic conditions against which the consumers' League is battling. She is also averse to the Chicago or any other stores selling "sweated goods," and forcing clerks to work under harsh conditions. In her lecture to the students of the University of Chicago, she proposed greater activity on the part of the local Consumers' League and the organization of the students themselves.

"There is practically no stores in Chicago which complies with the modest demands of the Consumers' League in regard to 'sweated' goods and the treatment of clerks," said Miss Addams.

"In New York three establishments were already complying with league regulations when the organization was formed there, and several others have adopted them since. In Boston the majority of the stores keep sweat shop goods off their counters.

"This is not to be taken as meaning that Chicago merchants are necessarily less human than those of the East. It means simply that the purchasers have not yet interested themselves in the conditions which surround the persons which make and sell the garments which they wear.

"There is a good child-labor law in Illinois, but it is almost impossible to get good inspection of the sweatshops, and in these mushroom establishments [exists] the greatest danger of the development of the child labor system. Premature senility causes an alarmingly large number of deaths among the sweatshop workers.

"These things will go on however, unless we add to the force of factory inspectors and to the people who work personally among the people of the slums the force of a large public opinion among purchasers generally. Let a majority of the women of Chicago refuse to purchase garments made by children in sweatshops, let them say to the commercial world: 'We cannot and will not stand this. We refuse to purchase goods made under these terrible conditions,' and in a few months, sweatshops, in this city at least, will cease to exist."

Addams' speaks to the Consumer's League about the dangers of sweat shops and child labor.