Statement on Child Labor and the Plight of Orphans, June 4, 1903 (excerpt) 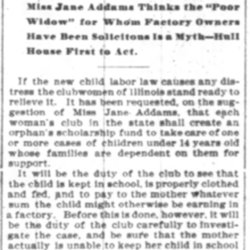 WOMEN TO RELIEVE DISTRESS DUE TO CHILD LABOR LAW.

Clubs of the State Asked to Care for Cases Where Suffering is Caused Through Operation of New Statute -- Miss Jane Addams Thinks the "Poor Widow" for Whom Factory Owners Have Been Solicitors Is a Myth -- Hull House First to Act.

If the new child labor law causes any distress the clubwomen of Illinois stand ready to relieve it. It has been requested, on the suggestion of Miss Jane Addams, that each woman's club in the state shall create an orphan's scholarship fund to take care of one or more cases of children under 14 years old whose families are dependent on them for support.

"I think," said Miss Addams, "that few such cases will be found. My idea in making the suggestion was, as much as anything else, to lay the ghost of that widowed mother about whom the manufacturers have always had so much to say. It is she who always has made any child labor legislation so difficult, and I believe she is a myth. I never have known any poor widowed mother dependent on a small boy for support. Children under 14 cannot make enough to keep a family, but if any such should be found the women's clubs ought to be ready to take care of them."