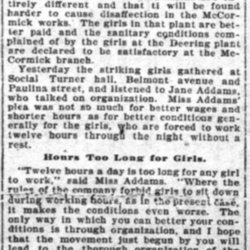 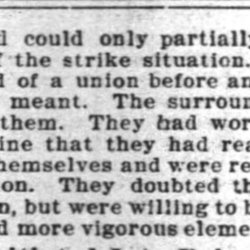 The Deering company yesterday made tempting offers to girls if they would leave the strikers and return to their posts, but they failed to heed the inducements, and instead they persuaded a number of those who had remained loyal to the company to quit.

Yesterday the striking girls gathered at Social Turner hall, Belmont avenue and Paulina street, and listened to Jane Addams, who talked on organization. Miss Addams' plea was not so much for better wages and shorter hours for the girls, who are forced to work twelve hours through the night without a rest.

Hours Too Long for Girls

"Twelve hours a day is too long for any girl to work," said Miss Addams. "Where the rules of the company forbid girls to sit down during working hours, as in the present case, it makes the conditions even worse. The only way in which you can better your conditions is through organization, and I hope that the movement just begun by you will lead to the thorough organization of the Deering works."

From a sociological standpoint it was an interesting crowd that listened to Miss Addams. Some were mere children, who did not seem to be over 14 years of age. Their stooping shoulders and pinched faces showed the effects of hard labor. Others were old women who had spent a life-time in the [page 2] factory and could only partially grasp the meaning of the strike situation. They had never heard of a union before and wondered what it all meant. The surroundings were strange to them. They had worked so long at a machine that they had really become machines themselves and were restless when not in action. They doubted the utility of organization, but were more willing to be led by the younger and more vigorous element.

Addams' comments to striking girls about working conditions and labor organization. The strike, against the International Harvester Company, Deering Division, resulting in the shut down of the plant, putting 6,000 out of work. This is a portion of a longer article on the strike.