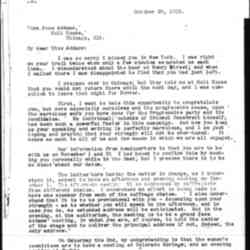 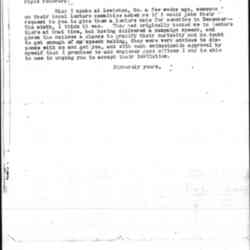 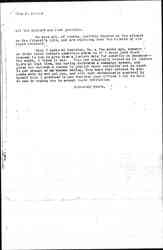 I was so sorry I missed you in New York. I was right on your trail twice when only a few minutes separated us each time. I misunderstood about the hour at Henry Street, and when I called there I was disappointed to find that you had just left.

I stopped over in Chicago, but they told me at Hull House that you would not return there until the next day, and I was compelled to leave that night for Denver.

First, I want to take this opportunity to congratulate you, but more especially ourselves and the progressive cause, upon the marvelous work you have done for the Progressive party and its candidates. No individual, outside of Colonel Roosevelt himself, has been such a powerful factor in this campaign. And how you keep up your speaking and writing is perfectly marvelous, and I am just hoping and praying that your strength will not be over-taxed. It means so much to all of us and the cause in which we are all engaged.

Our information from headquarters is that you are to be with us on November 1 and 2. I had hoped to confirm this by meeting you personally while in the East, but I presume there is to be no doubt about our dates.

The ladies here having the matter in charge, as I understand it, expect to have an afternoon and evening meeting on November 1. The afternoon meeting will be addressed by suffragists from different states. I understand an effort is being made to have one speaker from each of the suffrage states. I also understand that it is to be provisional with you -- depending upon your strength -- as to whether you will speak in the afternoon, and in case you do, no extended address will be anticipated. But in the evening, at the auditorium, the meeting is to be a grand Jane Addams' meeting, in which you are, of course, to hold the center of the stage and to deliver the principal address if not, indeed, the only address.

On Saturday the 2nd, my understanding is that the women's committees are to have a meeting at Colorado Springs, and an evening meeting at Pueblo.

Some of our active women progressives are, of course, keen for the honor of entertaining you while here, and I understand that is to be arranged among them so as to avoid what I feared was going to be a serious matter because of the desire of so many of our good women folk for this honor. If you should feel, however, that you would be more comfortable at a hotel I am sure that it would be perfectly understood, and such arrangements could be made giving you [page 2] all the comfort and rest possible.

We were all, of course, terribly shocked at the attempt on the Colonel's life, and are rejoicing over the reports of his rapid recovery.

When I spoke at Lewiston, Me. a few weeks ago, someone on their local lecture committee asked me if I would join their request to you to give them a lecture date for sometime in December -- the sixth, I think it was. They had originally booked me to lecture there at that time, but having delivered a campaign speech, and given the natives a chance to gratify their curiosity and no doubt to get enough of my speech making, they were very anxious to dispense with me and get you, and with such enthusiastic approval by myself that I promised to add whatever good offices I may be able to use in urging you to accept their invitation.

Lindsey congratulates Addams on her campaign work for the Progressive Party and expresses his disappointment for missing chances to see her.