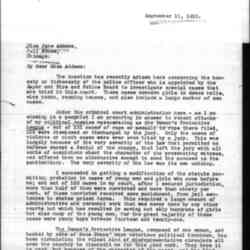 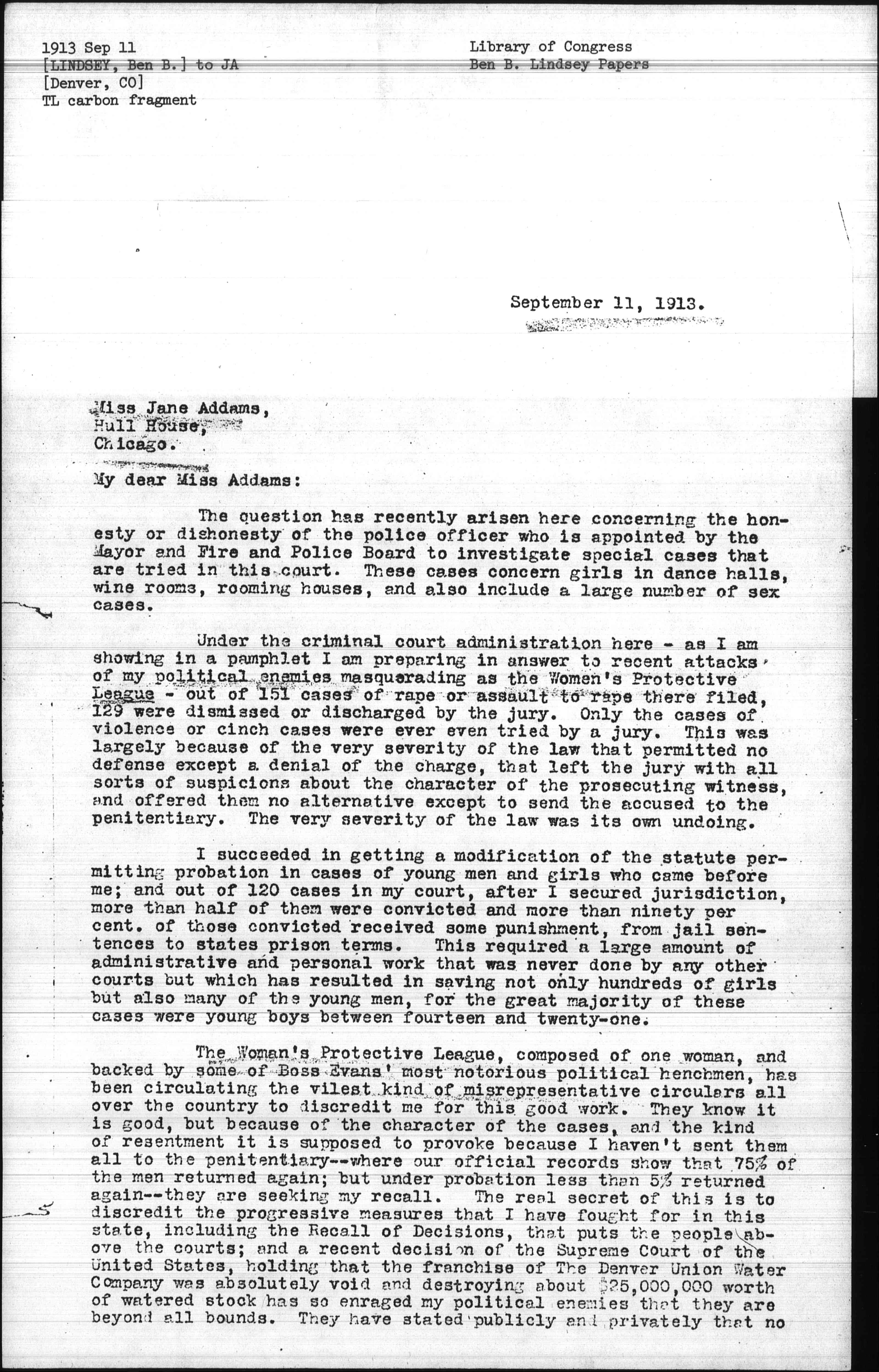 The question has recently arisen here concerning the honesty or dishonesty of the police officer who is appointed by the Mayor and Fire and Police Board to investigate special cases that are tried in this court. These cases concern girls in dance halls, wine rooms, rooming houses, and also include a large number of sex cases.

Under the criminal court administration here -- as I am showing in a pamphlet I am preparing in answer to recent attacks of my political enemies masquerading as the Women's Protective League -- out of 151 cases of rape or assault to rape there filed, 129 were dismissed or discharged by the jury. Only the cases of violence or cinch cases were ever even tried by a jury. This was largely because of the very severity of the law that permitted no defense except a denial of the charge, that left the jury with all sorts of suspicions about the character of the prosecuting witness, and offered them no alternative except to send the accused to the penitentiary. The very severity of the law was its own undoing.

I succeeded in getting a modification of the statute permitting probation in cases of young men and girls who came before me; and out of 120 cases in my court, after I secured jurisdiction, more than half of them were convicted and more than ninety [percent] of those convicted received some punishment, from jail sentences to [state] prison terms. This required a large amount of administrative and personal work that was never done by any other courts but which has resulted in saving not only hundreds of girls but also many of the young men, for the great majority of these cases were young boys between fourteen and twenty-one.

The Woman's Protective League, composed of one woman, and backed by some of Boss Evans' most notorious political henchman, has been circulating the vilest kind of misrepresentative circulars all over the country to discredit me for this good work. They know it is good, but because of the character of the cases, and the kind of resentment it is supposed to provoke because I haven't sent them all to the penitentiary -- where our official records show that 75% of the men returned again; but under probation less than 5% returned again -- they are seeking my recall. The real secret of this is to discredit the progressive measures that I have fought for in this state, including the Recall of Decisions, that puts the people above the courts; and a recent decision of the Supreme Court of the United States, holding that the franchise of The Denver Union Water Company was absolutely void and destroying about $25,000,000 worth of watered stock has so enraged my political enemies that they are beyond all bounds. They have stated publicly and privately that no [missing page(s)]

Lindsey writes Addams to explain a campaign to discredit his work to regulate crime against women.

The letter is a fragment.