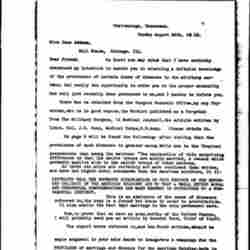 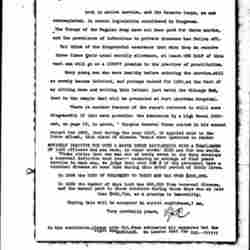 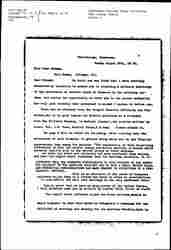 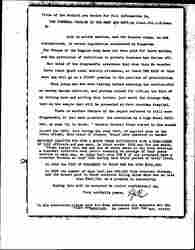 Dear friend; No doubt you may think that I have entirely abandoned my intention to assist you in obtaining a definite knowledge of the prevalence of certain class of diseases in the military service; but really the opportunity to refer you to the proper authority has only just recently been presented to me, and I hasten to inform you.

There can be obtained from the Surgeon General's Office, by any Physician, who is in good repute, the Booklet published as a [Reprint] from The Military Surgeon, (A Medical Journal), the article written by Lieut. Col. J. R. Kean, Medical Corps, U.S. Army. Please obtain it.

On page 9 will be found the following -- after stating that the prevalence of such diseases is greater among white men in the Tropical possessions than among the natives -- "The explanation of this surprising difference is that the native troops are mostly married, a reason which probably applies also to the native troops of other nations."

As these [Asians] are certainly not more continent than whites, and have not higher moral standards than the American soldiers, it [ILLUSTRATES] WELL THE ENORMOUS DISADVANTAGE IN THIS RESPECT OF THE ENFORCED CELIBACY OF THE AMERICAN SOLDIER? AND TO WHAT A SMALL EXTENT MORAL AND PRUDENTIAL CONSIDERATIONS CAN MAKE HEADWAY IN OPPOSITION TO A FUNDAMENTAL INSTINCT.

This is an admission of the cause of diseases referred to, the Army is a forced hot house to cater to prostitution. It also admits the fact that marriage is the only permanent cure.

Now, to prove that we have no army, worthy of the United States, I will probably send you an article by General Wood, Chief of Staff.

The report above referred to, and Gen. Wood's article, should be ample argument in your able hands to inaugurate a campaign for the PRIVILEGE of marriage and decency for the American Soldier, both in [page 2] active service, and the Reserve Corps, as now contemplated, in recent legislation considered by Congress.

The Troops of the Regular Army have not been paid for three months, and the prevalence of infections in private diseases has fallen off.

But think of the disgraceful assurance that when they do receive three times their usual monthly allowance, at least ONE HALF of this vast sum will go as a DIRECT premium to the practice of prostitution.

Many young men who were healthy before entering the service will surely become infected, and perhaps ruined for life, as the fact of my sitting here and writing this letter; just watch the Chicago End, that is the sample that will be presented at Fort Sheridan Hospital.

There is another feature of the report referred to still more disgraceful if that were possible -- the admission by a high Naval Officer, on page 10, to quote, "Surgeon General Rixey stated in his annual report for 1909, that during the year 1907, if applied sole to the force afloat, this class of disease 'would have operated to render ENTIRELY INACTIVE FOR OVER A MONTH THREE BATTLESHIPS WITH A COMPLIMENT OF 1000 officers and men each, in other words -- 3000 men for one month.'"

"Fiske states that one man out of every seven in the Navy develops a venereal infection each year" -- assuming an average of four years service to each man, we judge that over 50% of the personnel have a venereal disease at some time during this brief period of their lives.

In 1909 the number of days lost was 692,355 from venereal disease, and the amount paid to these soldiers during those days was no less than $448,716. as a premium to immorality.

Hoping this will be accepted in strict confidence, I am,

In his conclusion, please note Col. Kean advocates all measures but the right one MARRIAGE. He Leaves that for YOU -- ??????

L. J. R. writes Addams regarding venereal disease in the army and shares the title of a booklet that addresses the subject.

Typed at the top of page 2: "Title of the Booklet you desire for full information is, THE VENEREAL PROBLEM IN THE ARMY [AND] NAVY, by Lieut. Col. J. R. Kean."