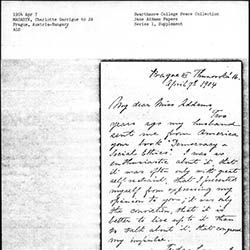 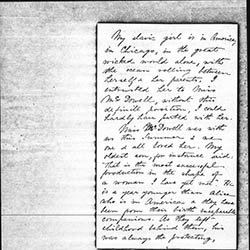 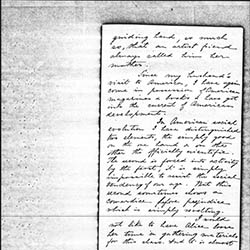 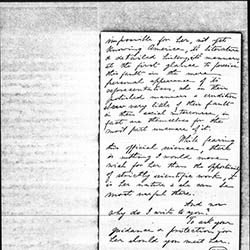 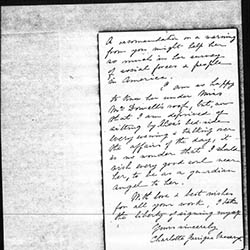 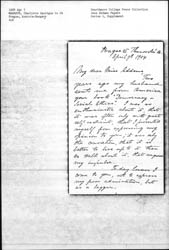 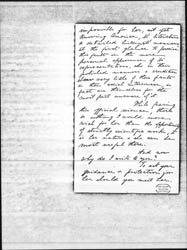 Two years ago my husband sent me from America your book "Democracy & Social Ethics."  I was so enthusiastic about it, that it was often only with great self-restraint, that I prevented myself from expressing my opinion to you; it was only the conviction, that it is better to live up to it than to talk about it, that conquered my impulse.

Today however I come to you, not to express my poor admiration but as a beggar. [page 2]  My slavic girl is in America, in Chicago, in the great wicked world alone, with the ocean rolling between herself & her parents.  I entrusted her to Miss McDowell, without this definite position, I could hardly have parted with her.

Miss McDowell was with me this summer & we one & all loved her.  My oldest son, for instance said: "That is the most successful production in the shape of a woman I have yet met."  He is a year younger than Alice who is in America & they have been from their birth inseparable companions.  As they left childhood behind them, his was always the protecting, [page 3] guiding hand, so much so, that an artist friend always called him her mother.

Since my husband's visit to America, I have again come in possession of American magazines & books & have got into the current of American development.

In American social evolution I have distinguished two elements, the simply good on the one hand & on the other the officially scientific.  The second is forced into activity by the first, it is simply impossible to resist the social tendency of our age.  But this second sometimes shows a cowardice before prejudice which is simply revolting.

I would not like to have Alice loose her time in gathering materials for this class.  And it is almost [page 4] impossible for her, not yet knowing America, it's literature & detailed history, it's manners at the first-glance to perceive this fault in the mere personal appearance of its representations, who in their polished manners & erudition show very little of their fault in their social intercourse, in fact are themselves for the most part unaware of it.

While fearing this official science, there is nothing I would more wish for her than the opportunity of strictly scientific work, it is her nature & she can be most useful there.

And now why do I write to you?

To ask your guidance & protection for her should you meet her. [page 5]  A recommendation or a warning from you might help her so much in her survey of social forces & people in America.

I am so happy to know her under Miss McDowell's roof, but, now that I am deprived of sitting by Alice's bed-side every evening & talking over the affairs of the day, it is no wonder that I should wish every good soul near her, to be as a guardian angel to her.

With love & best wishes for all your work, I take the liberty of signing myself 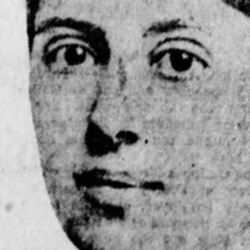 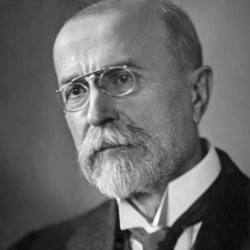 Masaryk writes enthusiastically about Democracy and Social Ethics, and asks Addams to assist her "Slavic girl" Alice who is in Chicago with Miss McDowell.