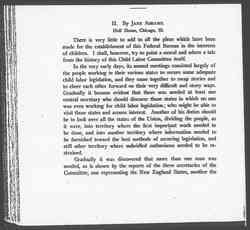 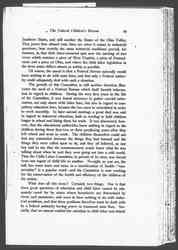 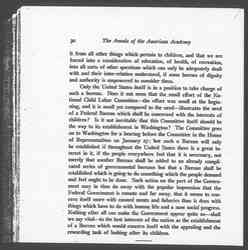 There is very little to add to all the pleas which have been made for the establishment of this Federal Bureau in the interests of children. I shall, however, try to point a moral and adorn a tale from the history of this Child Labor Committee itself.

In the very early days, its annual meetings consisted largely of the people working in their various states to secure some adequate child labor legislation, and they came together to swap stories and to cheer each other forward on their very difficult and stony ways. Gradually it became evident that there was needed at least one central secretary who should discover those states in which no one was even working for child labor legislation; who might be able to visit those states and arouse interest. Another of his duties should be to look over all the states of the Union, dividing the people, as it were, into territory where the first important work needed to be done, and into another territory where information needed to be furnished toward the best methods of securing legislation, and still other territory where unbridled enthusiasm needed to be restrained.

Gradually it was discovered that more than one man was needed, as is shown by the reports of the three secretaries of the Committee, one representing the New England States, another the [page 2] Southern States, and still another the States of the Ohio Valley. They prove how absurd state lines are when it comes to industrial questions; how exactly the same industrial conditions prevail, for instance, in that little three-cornered spot near the meeting of two rivers which contains a piece of West Virginia, a piece of Pennsylvania and a piece of Ohio, and where the child labor legislation in the three states differs almost as widely as possible.

Of course, the moral is that a Federal Bureau naturally would have nothing to do with state lines, and that only a Federal authority could adequately deal with such a situation.

The growth of this Committee in still another direction illustrates the need of a Federal Bureau which shall furnish information in regard to children. During the very first years in the life of the Committee, it was found necessary to gather careful information, not only about child labor laws, but also in regard to compulsory education laws, because the two must be articulated in order to work smoothly. In later annual meetings a great deal was said in regard to industrial education, both as tending to hold children longer in school and fitting them for work. It was discovered, however, that the educational authorities knew nothing in regard to the children during those first two or three perplexing years after they left school and went to work. The children themselves could not find any connection between the things they had learned and the things they were called upon to do, and they all believed, as one boy said to me, that the commencement orator knew what he was talking about when he said they were going out into a cold world. Thus the Child Labor Committee, in pursuit of its aims, was forced from one aspect of child life to another. [Tonight], as you see, the talk has come more and more to a consideration of health -- "conservation" is a popular world -- and the Committee is now working for the conservation of the health and efficiency of the children of the nation.

What does all this mean? Certainly two things. One is that these great questions of education and child labor cannot be adequately cared for by states whose boundaries are determined by rivers and mountains, and seem to have nothing to do with industrial problems, and that these problems therefore must be dealt with by a federal authority having power to transcend state lines. Secondly, that we cannot confine our attention to child labor and detach [page 3] it from all other things which pertain to children, and that we are forced into a consideration of education, of health, of recreation, into all sort of other questions which can only be adequately dealt with and their inter-relation understood, if some bureau of dignity and authority is empowered to consider them.

Only the United States itself is in a position to take charge of such a bureau. Does it not seem that the small effort of the National Child Labor Committee -- the effort was small at the beginning, and it is small yet compared to the need -- illustrates the need of a Federal Bureau which shall be concerned with the interests of children? Is it not inevitable that this Committee itself should be the way to its establishment in Washington? The Committee goes on to Washington for a hearing before the Committee in the House of Representatives on January 27; but such a Bureau will only be established if throughout the United States there is a great interest in it, if the people everywhere feel that it is necessary, not merely that another Bureau shall be added to an already complicated series of governmental bureaus but that a Bureau shall be established which is going to do something which the people demand and feel ought to be done. Such action of the part of the Government may in time do away with the popular impression that the Federal Government is remote and far away, that it seems to concern itself more with canned meats and fisheries than it does with things which have to do with human life and a sane social progress. Nothing after all can make the Government appear quite so -- shall we say vital -- to the best interests of the nation as the establishment of a Bureau which would concern itself with the appealing and the rewarding task of looking after its children. 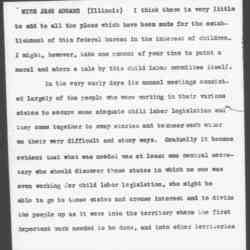 Addams argues for the establishment of a federal bureau for the protection of children, especially regarding the issues of child labor and education. This is a published version of Addams' speech to the National Child Labor Committee meeting in January 1909.