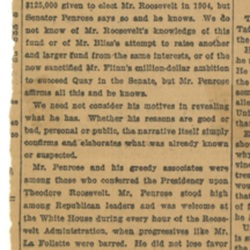 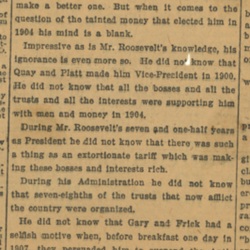 THE MAN WHO DOES NOT KNOW.

We do not know that the $25,000 sent to him by Mr. Archbold was part of a Standard Oil fund of $125,000 given to elect Mr. Roosevelt in 1904, but Senator Penrose says so and he knows. We do not know of Mr. Roosevelt's knowledge of this fund or of Mr. Bliss's attempt to raise another and larger fund from the same interests, or of the now sanctified Mr. Flinn's million-dollar ambition to succeed Quay in the Senate, but Mr. Penrose affirms all this and he knows.

We need not consider his motives in revealing what he has. Whether his reasons are good or bad, personal or public, the narrative itself simply confirms and elaborates what was already known or suspected.

Mr. Penrose and his greedy associates were among those who conferred the Presidency upon Theodore Roosevelt. Mr. Penrose stood high among Republican leaders and was welcome at the White House during every hour of the Roosevelt Administration, when progressives like Mr. La Follette were barred. He did not lose favor with Mr. Roosevelt until he declined to enlist for a third term. These are facts to be remembered no matter what we may think of Mr. Penrose.

In his new role of reformer and Progressive Mr. Roosevelt has made no important response to this confession of one of the men who made him President and who ruled his party, except the plea of ignorance. He profited by the Senator's activities. He and his whole political household were beneficiaries. But if we are to believe one who is often detected in misstatements, Mr. Roosevelt knew nothing of what was going on.

Corruption funds, then, are the only things in this world as to which the ex-President frankly admits ignorance. He can regulate everything, from the size of families to the contents of a spelling-book. He can rewrite all our Constitutions and laws single-handed. In one day he can upset the jurisprudence of a thousand years and make a better one. But when it comes to the question of the tainted money that elected him in 1904 his mind is a blank.

During Mr. Roosevelt's seven and one-half years as President he did not know that there was such a thing as an extortionate tariff which was making these bosses and interests rich.

During his Administration he did not know that seven-eighths of the trusts that now afflict the country were organized.

He did not know that Gary and Frick had a selfish motive when, before breakfast one day in 1907, they persuaded him to suspend the Anti-Trust law in behalf of the Steel Trust.

An ignorant man truly, and yet Mr. Roosevelt's political fortunes and official conduct harmonized wonderfully with the contributions and the purposes of Harriman, Standard Oil, Wool, Sugar and Steel! How can we account for it? 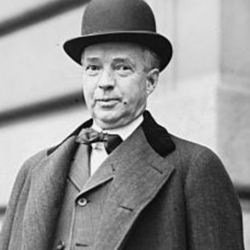 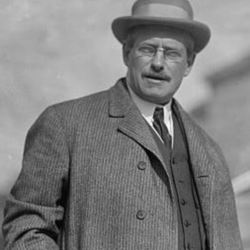 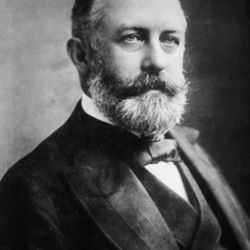 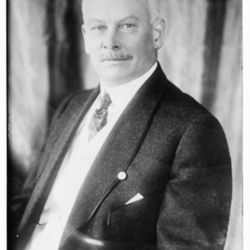 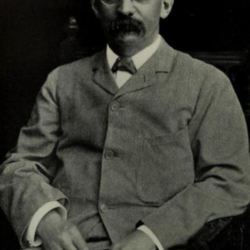 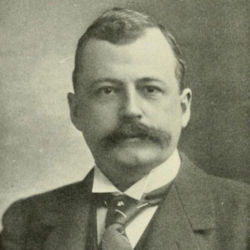 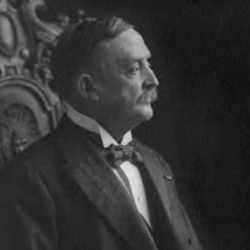