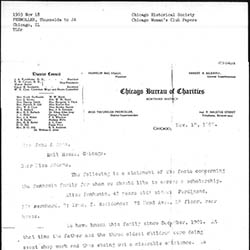 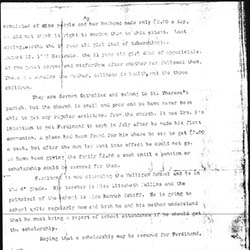 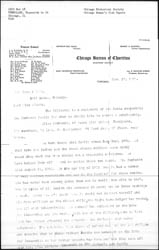 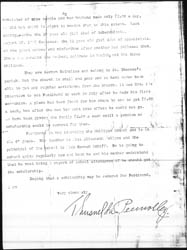 The following is a statement of the facts concerning the Pankonin family for whom we should like to secure a scholarship.

We have known this family since December, 1901.  At that time the father and the three oldest children were doing sweat shop work and thus ekeing out a miserable existence.  We have helped them off and on during those two years.  Mr. Pankonin died August 11, 1902.  In the spring of 1902 Mrs. P. had a number of very serious operations and was in the hospital for three months.  She has never been strong since then and is really not able to work, but in spite of ill health she succeeds in doing two or three washings a week.  After Mr. P's death Mrs. P. could not support herself and her five children as the oldest child, who might have helped her mother, was ill with tuberculosis.  We secured her admission to the Home for Incurables and the mother, with two of the children, went to live with her sister, placing the remaining two children with other relatives.  The relatives grew tired of taking care of the two children and brought them to their mother; Bertha was homesick in the Home for Incurables so her mother brought her home and now they were all with Mrs. P's. sister.  Inasmuch as the sister's own family [page 2] consisted of nine people and her husband made only $2.00 a day, we did not think it right to burden them to this extent.  Last spring, Bertha the 16 year old girl died of tuberculosis. August 15, 1903 Gertrude the 11 year old girl died of appendicitis. So one great sorrow and misfortune after another has followed them.  There now remains the mother, delicate in health, and the three children.

They are German Catholics and belong to St. Theresa's parish, but the church is small and poor and we have never been able to get any regular assistance from the church.  It was Mrs. P's intention to put Ferdinand to work in July after he made his first communion.  A place had been found for him where he was to get $3.00 a week, but after the new law went into effect he could not go.  We have been giving the family $2.00 a week until a pension or scholarship could be secured for them.

Ferdinand is now attending the Mulligan School and is in the 4" grade.  His teacher is Miss Elisabeth Mullins and the principal of the school is Miss Hannah Schiff.  He is going to school quite regularly now and both he and his mother understand that he must bring a report of school attendance if he should get the scholarship.

Hoping that a scholarship may be secured for Ferdinand, I am 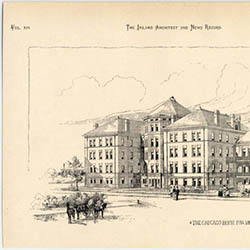 Chicago Home for the Incurables

Peemoller requests a scholarship for Ferdinand Pankonin and explains the family's poverty and need.