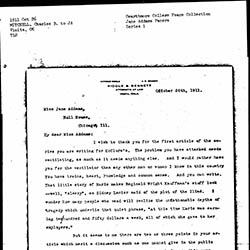 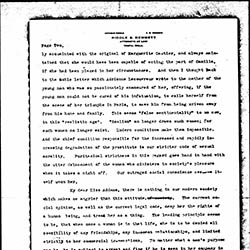 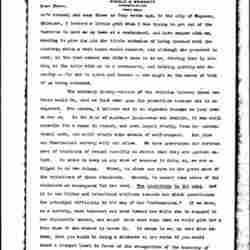 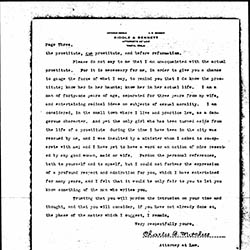 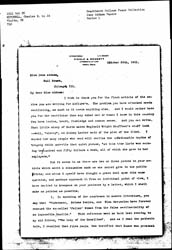 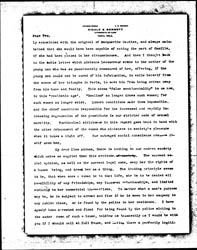 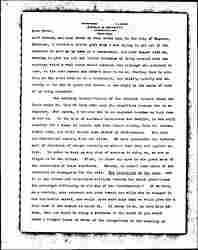 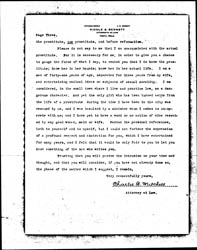 I wish to thank you for the first article of the series you are writing for McClure's. The problem you have attacked needs ventilating, as much as it needs anything else. And I would rather have you for the ventilator than any other man or woman I know in this country. You have brains, heart, knowledge and common sense. And you can write. That little story of Marie makes Reginald Wright Kauffman's stuff look -- well, "sleazy", as Sidney Lanier said of the plot of the Iliad. I wonder how many people who read will realize the unfathomable depths of tragedy which underlie that quiet phrase, "At this time Marie was earning two hundred and fifty dollars a week, all of which she gave to her employers."

But it seems to me there are two or three points in your article which merit a discussion such as one cannot give in the public prints; and since I myself have thought a great deal upon this same question, and perhaps approach it from an individual point of view, I have decided to trespass on your patience by a letter, which I shall make as pointed as possible.

1. In speaking of the courtesan in modern literature, you say that "Sudermann, Helene Bohlau, and Elsa Gerusalem have forever rescued the so-called 'fallen' woman from the false sentimentality of an impossible Camille." This reference sent me back last evening to my old friend, "The Lady of Camellias". And as I read the pathetic tale, I recalled that Jules Janin has testified that Dumas was personally [page 2] acquainted with the original of Marguerite Gautier, and always maintained that she would have been capable of acting the part of Camille, if she had been placed in her circumstances. And then I thought back to the noble letter which Adrienne Lecouvreur wrote to the mother of the young man who was so passionately enamoured of her, offering, if the young man could not be cured of his infatuation, to exile herself from the scene of her triumphs in Paris, to save him from being driven away from his home and family. This seems "false sentimentality" to us now, in this "realistic age". "Realism" no longer draws such women; for such women no longer exist. Modern conditions make them impossible. And the chief condition responsible for the increased and rapidly increasing degradation of the prostitute is our stricter code of sexual morality. Puritanical strictness in this regard goes hand in hand with the utter debasement of the woman who ministers to society's pleasure when it takes a night off. Our outraged social conscience [illegible] itself upon her.

My dear Miss Addams, there is nothing in our modern society which makes me angrier than this attitude of society. The current social opinion, as well as the current legal code, deny her the rights of a human being, and treat her as a thing. The leading principle seems to be, that when once a woman is in that life, she is to be denied all possibility of any friendships, any innocent relationships, and limited strictly to her commercial transactions. No matter what a man's purpose may be, he is subject to arrest and fine if he is seen in her occupancy in any public place, or is found by the police in her residence. I have myself been arrested and fined for being found by the police sitting in the outer room of such a house, talking as innocently as I would be with you if I should call at Hull House, and having there a perfectly legitimate [page 3] errand; and some three or four weeks ago, in the city of Wagoner, Oklahoma, I invited a little girl whom I was trying to get out of the business to meet me up town at a restaurant, and have supper with me, wanting to give the kid the little stimulus of being treated with the courtesy which a real woman would command, and although she promised to come, at the last moment she didn't dare to do so, fearing that by sitting at the table with me in a restaurant, and talking quietly and decently -- for she is quiet and decent -- she might be the means of both of us being arrested.

The ordinary interpretation of the relation between these two facts would be, that we look down upon the prostitute because she is so degraded. Per contra, I believe she is so degraded because we look down on her so. In the days of Adrienne Lecouvreur and Camille, it was still possible for a woman to depart, and even depart widely, from the conventional code, and still retain some shreds of self-respect. But this our Pharisaical society will not allow. We have undertaken the enforcement of standards of sexual morality so strict that they are against nature. In order to keep up any show of success in doing so, we are obliged to do two things. First, to close our eyes to the great mass of the violations of these standards. Second, to select some class of the violators as scapegoats for the rest. The prostitute is the goat. And it is our bitter and relentless attitude towards her which constitutes the principal difficulty in the way of her "reformation." If we were, as a society, more tolerant and kind toward her while she is engaged in her deplorable career, she would have more hope that we would give her a fair show if she wished to leave it. It seems to me, my dear Miss Addams, that you would be doing a kindness to the world if you would sound a trumpet blast in favor of the recognition of the humanity of [page 4] the prostitute, qua prostitute, and before reformation.

Please do not say to me that I am unacquainted with the actual prostitute. For it is necessary for me, in order to give you a chance to gauge the force of what I say, to remind you that I do know the prostitute; know her in her haunts; know her in her actual life. I am a man of forty-one years of age, separated for three years from my wife, and entertaining radical ideas on subjects of sexual morality. I am considered, in the small town where I live and practice law, as a dangerous character. And yet the only girl who has been turned aside from the life of a prostitute during the time I have been in the city was rescued by me, and I was insulted by a minister whom I asked to [cooperate] with me; and I have yet to have a word or an action of mine resented by any good woman, maid or wife. Pardon the personal references, both to yourself and to myself, but I could not forbear the expression of a profound respect and admiration for you, which I have entertained for many years, and I felt that it would be only fair to you to let you know something of the man who writes you.

Trusting that you will pardon the intrusion on your time and thought, and that you will consider, if you have not already done so, the phase of the matter which I suggest, I remain,

Very respectfully yours,
Charles B. Mitchell [signed]
Attorney at Law. 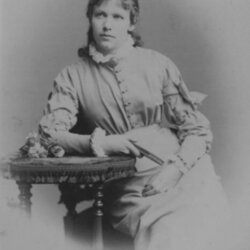 Mitchell compliments Addams' article in McClure's Magazine and offers some of his own reflections on the subject of prostitution.